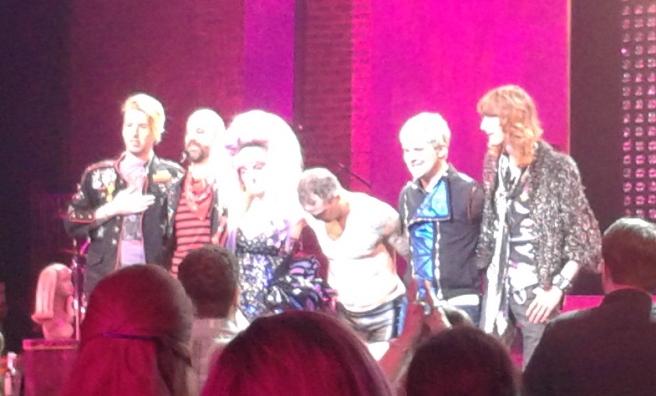 No other Hedwig can pull off a high kick like this man. I mean, WOW. Y’all probably know I’m a Darren Criss fan, and I find it hard to resist anything Andrew Rannells or John Cameron Mitchell turn up in. But Euan has the best legs. (I’ll concede to JCM fans if anyone wants to argue with me.) Hedwig also has tattoos in this incarnation, a partial sleeve on her left arm that runs up over her pec, and several smaller ones on her right arm. (Including a zia, the sun symbol of the Zia people and New Mexico, the metawitches home state.)

But, on to more important things. Euan’s Hedwig is closer to a combination of NPH and John Cameron Mitchell in manner than any of the others. Great with the physical comedy. She’s more sad than angry, and both graceful and clumsy at the same time. She’s loose and flexible, rolling around on the stage more than any other Hedwig, I think. She rolls down the car windshield and right onto the floor at the beginning of Angy Inch. Euan’s Hedwig puts on a good face and keeps soldiering on until she. just. can’t. do. it. any. more. Then, SHE’S DONE. And she breaks down completely during Long Grift/Exquisite Corpse. She’s broken, and can’t even hold her head up.

(Audio at the bottom)

Euan is Scottish, and having that accent underly his German accent gave it a lovely bit of a lilting quality. His accent was also the easiest to understand for me of the Hedwigs. His voice carried loudly and clearly out over the audience. The sound mix was off at times during the songs so that all of the singers were nearly drowned out, but that was a minor issue. For the most part he sounded good when he was singing as well. I love the tone of his voice on the slower songs.

His matinee Midnight Radio was more joyful than most Hedwigs’ which was a little jarring. (Not that he was doing a happy dance. He just wasn’t as inward and contemplative.) MR was more intense for the evening show. He doesn’t really connect with the band, or move around the stage much during that song. Not much spinning like a 45. Euan also doesn’t have Darren’s mike handling skills yet, but then, who does? He’s still very early in his run, so that might change.

The new jokes written specifically for Euan are hilarious!! The Denver-specific jokes were good, too. Drug-related jokes went over especially well. They added extra for Denver, I think. For anyone who doesn’t know, Colorado is one of the few states in the US where recreational marijuana use is legal. Euan was one of the best Hedwigs with ad libbing and engaging the crowd. He knew how to work the audience and draw out the laughs. Only JCM and Darren were better, in my experience.

Hannah’s Yitzhak is very self-contained, self-possessed. Very pretty face, like someone from a nineties boy band. He’s also more sad than angry on the surface, but the anger breaks through as the evening wears on. He’s a very proud Yitzhak. It takes a lot to make him angry, but, like his Hedwig, when he gets there, it’s intense. His eyes were throwing daggers at Hedwig by the time he spit in her face just before Exquisite Corpse. I’ve seen all of the Yitzhaks live, and they all got intensely angry at that point, but this was a true “if looks could kill” moment. It’s the quiet ones you need to be afraid of.

Yitzhak was probably seething with underlying rage because Hedwig was especially callous with him. When the sheet music got stuck to Hedwig’s foot, Yitzhak chased her around the stage trying to get it off. Hedwig ran away, pretending not to recognize Yitzhak, screaming that Yitz was a hairy ugly ape who’d escaped from the Denver zoo. Yikes. For today’s performances, at least, this was a cold relationship. Yitzhak was extremely jealous of the men who got Hedwig’s attention during Sugar Daddy, though, so I guess the romance isn’t completely dead.

The Berlin Wall Comes Down (Monologue)

Wig in a Box

ETA 9/19: Euan (and Hedwig) fans- Links to our collections of full show audios are available on our (mostly inactive) tumblr: National tour audios  Broadway audios  The full (untracked) audios of both 12/10/16 shows are at the National tour link. 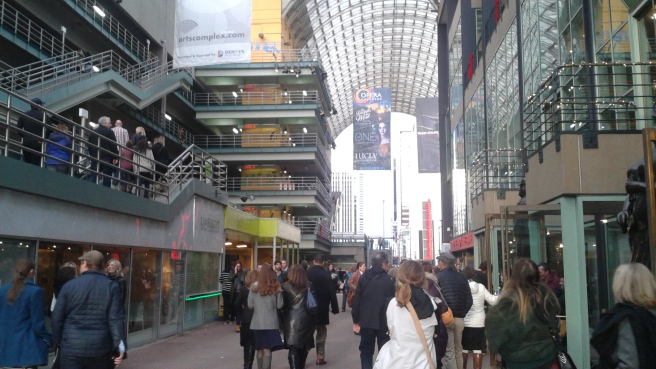