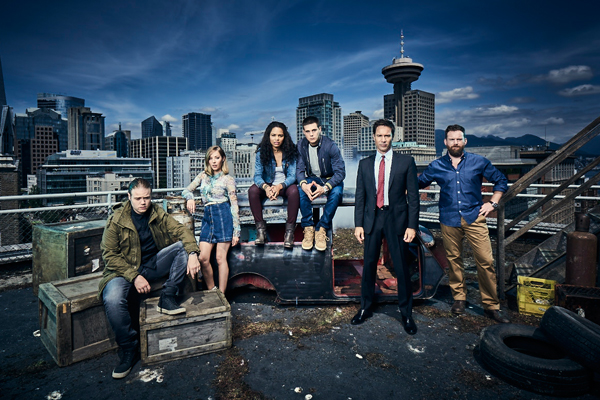 Marcy and David set off for the doctor visit Marcy agreed to in the last episode, but when Marcy realizes that she’s already had an MRI, she backs out. David is still confused by the changes in her. Later in the episode, Marcy asks Philip to hack into the hospital’s records and retrieve her MRI. We don’t see the results in this episode.

Philip is back to using heroin, ostensibly just enough to keep him functional as he weans himself off the addiction. It ends up being too tempting to also use it to deal with his guilt over the deaths they aren’t allowed to prevent, though, and he increases his use. As the team historian he’s memorized the death dates of hundreds of host candidates, and every death weighs on him. Marcy notices his condition and calls him out on it, but he’s out of control.

Philip goes to Stephen’s funeral. He’s overwhelmed with guilt for not saving original Philip’s best friend. Traveler Philip is a sensitive soul.  He gives his condolences to Stephen’s parents, but they blame him for their son’s death. He has Ray, his lawyer, make more winning bets, then distribute the money to Stephen’s parents, and Gower’s family (the cop he watched die of a heart attack in the pilot). He also begins calling in anonymous tips based on his memorized knowledge, to prevent a few more deaths. The FBI tracks the IP that the tips are coming from, but McLaren intervenes in time to stop the FBI from finding Philip.

The team sets off on their next mission, but are stopped en route by a child being used to transmit a message from the traveler director. Prepubescent brains are malleable enough to be taken over temporarily without killing the host, so children are used to deliver emergency messages. In this case, a child is sent out alone, late at night, to ride his bike in front of the team’s van so that they almost run him over. There are some ethical implications of the travelers’ protocols that the show is taking for granted at this point. Philip, at least, is concerned about preventable deaths, and Trevor, Carly, and McLaren, about changing their hosts’ behavior. But Philip is exploiting his lawyer’s addictions, the travelers are exploiting children and putting them in dangerous situations, and David’s job is at risk because he’s helping Marcy. When is it okay to hurt and use people, especially without their knowledge and consent, as with the children, for the greater good? Where is the line that says you’ve gone too far? Or does saving the future make anything okay? Even Nazism, child murder, and white supremacy? It’s a slippery slope that’s easy to tumble down, while telling yourself you’re doing the right thing. All of this unquestioning adherence to protocol could become disturbing very quickly.

Original Trevor was not a nice guy, and his girlfriend isn’t nice either. The girlfriend breaks another girl’s phone in the cafeteria, and Trevor pays to replace it. Everyone is confused by his personality change. Trevor is trying to be nicer, and more responsible, but he keeps spacing out and getting distracted by new experiences.

Jeff the abusive police officer baby daddy begins investigating the travelers for real. This could be a problem, kids. He starts with questioning David about Marcy, and he figures out how to push David’s buttons very quickly. Jeff shows David surveillance photos from the night Marcy was attacked and traveler Marcy took over. He leaves David even more nervous and suspicious than he was before. I still think there’s an off chance that Jeff is a traveler from an enemy faction who piggybacked into original Jeff’s body using McLaren’s signal. He could be investigating them to figure out who the new traveler team is, so that he can undermine or assassinate them. Or, he could be some sort of watcher sent down by the director and meant to keep an eye on the team.

Philip sees a child playing outside the team’s headquarters, and gets an idea. He calls the team to Carly’s house, and explains to them that they’ve been given a new mission to rescue a kidnapped boy. The team chooses weapons, then heads to the farm where the boy is being held. McLaren and Carly question the kidnappers in the living room, while Phillip and Marcy go to the basement to look for the child. Trevor stays in the van. Philip digs in the basement chicken pen and finds a child’s body. McLaren asks to speak to the couple’s son, since there were boy’s sneakers in the front hall. They call “Patrick” down. When the child enters the room, McLaren questions him in Russian and he tells McLaren that he’s been kidnapped. Before the team can do anything else, the boy, whose name turns out to be Aleksander, is taken over and delivers a traveler message. Aleksander is forced to tell McLaren to abort the mission, which would mean leaving him to die. That’s creepy and unethical as hell. Everyone in the room starts yelling. In the chaos, Philip jumps in front of Aleksander and refuses to leave him, and the three children who will follow after him, to die. Shots are fired. The kidnappers are killed and Philip is seriously wounded. The team cleans up any evidence that any of them were there, other than McLaren. McLaren asks Aleksander to lie about who was at the house.

Let’s add lying and secret-keeping to the kid’s list of traumas, shall we? Great rescue, guys. The future must be a really terrible place, if you think it would’ve been okay to set that kid up for a rescue, then just walk away in the middle of it, leaving him to die. Punish Philip for the breach of protocol, by all means. But don’t leave the kid to die once you’re standing right in front of him and have told him he’s getting out.

McLaren covers up the breach in protocol by telling his FBI partner. Forbes, that he discovered the kidnapping when he was following up on the IP addresses from the anonymous tips. The rest of the team rushes Philip back to headquarters and gives him emergency treatment. McLaren returns and confronts Philip. They argue about the prorocols, then Marcy reveals that Philip is addicted to heroin because his host was. McLaren cuts him some slack, as long as Marcy can help him quit over time.

The travelers appear to be taking on characteristics of their hosts, either because of internal influence from the bodies and/or minds they’ve taken over, or because the expectations of the people around them have pushed them to act in certain ways. Nature or nurture? I hope the show addresses the issue at some point. It’s an interesting question. Philip’s addiction and Trevor’s spaced out irresponsibility are more than just the travelers acting like their hosts to blend in.

Each traveler approaches their new access to meat differently. McLaren suggests he and his wife try veganism. Kat is surprised, because he’s usually a big meat eater.  Trevor brings a burger to headquarters and shows it to Philip: “Inhale the intoxicating aroma.” Philip: “Meat?” (He looks nauseated.) Trevor: “It’s ground.” Philip: “You do know they don’t actually grow that in the ground, right?” Trevor: “I’m not asking any questions. I’m embracing the 21st century.”

Disclaimer: I’ve been a vegetarian since 1992. I love future vegetarian humor. More, please.