Juliette’s physical therapy is coming along. She asks her physical therapist, Allyson, if Allyson has told her dad yet. Allyson says yes, she told him Sunday. He said, “God doesn’t make mistakes.” So Allyson replied, “God must have known what he was doing when he made me trans.” Juliette is supportive of Allyson. Juliette also wonders if she’d be better off as a guy, since she thinks like a guy. I think she thinks like a strong woman who didn’t give in to societal pressure to tone down and hide her personality when she was a little girl. It sounds like this is the beginning of a storyline for Allyson. I hope they do something more with her than mirror Will’s story about coming out to and being accepted by his dad.

Zach tells Rayna that Luke Wheeler is selling his label, Wheelin’ Dealin’, and they should buy it. Rayna hadn’t heard that Luke was interested in selling. So, Zach was all over Will last week, and suddenly he wants to buy Will’s record label, which isn’t even on the market yet. He also has Rayna’s Billboard stats memorized. Not creepy at all.

Rayna’s stalker had been following her for months. Deacon wants to carry a gun. Rayna says no.

The big discussion of Clay comes up and the accusations fly. Rayna exaggerates his age and thinks he’s too old for Maddie. Maddie thinks her parents don’t like him because he’s black. Rayna and Deacon nearly keel over from shock at that, and tell her how far things have come since they were young, which is so true. I still stop and marvel at how accepted interracial romances are on TV now. It’s become a required element instead of the awful taboo I gew up with. Her parents have no problem with Clay being black. But they think he’s much too old for her.

As long as she’s 17, it would be illegal for Clay and Maddie to have a sexual relationship in the state of Tennessee and several other states where the age of consent is 18. In most states they would be legal, since the age of consent is 16 or 17 in about 80% of the country. However, even in Tennessee it’s not illegal for them to hang around with each other while she’s still 17.

It’s very troubling that Rayna goes straight to assuming that Clay must be trying to take advantage of Maddie in some way. I come from a family that tends to have couples with large age differences, and some of those couples have gotten together when one of them was a teenager. Some couples have lasted, some haven’t, but age had nothing to do with their longevity. I don’t know where Nashville is going with this story, but Clay’s age alone isn’t the thing that would tear them apart in real life. The age of consent law in Tennessee might, or the level of bigotry they’d have to face, or the huge differences in their backgrounds and lifestyles, or his untreated mental illness. Clay is an interesting, complex character who opens up new avenues for Nashville to explore that they haven’t done much with yet, and he and Maddie make a good couple. I really want them to become one of the long term, anchor couples on the show. They’d be a classic soap opera couple that I could analyze and write about forever.

Daphne, as usual, proves that she’s the most sensible person in the house, and points out that Clay is really cute. Exactly. Daphne understands what’s important here. 😘😘 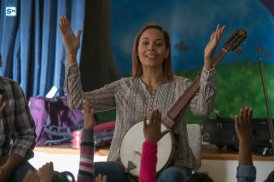 Hallie visits Juliette, Avery and Cadence for lunch. She’s a social worker who works with families in crisis. What are the odds that she’s Clay’s social worker? She invites Juliette to her church, even though Juliette’s presence can be disruptive. Avery has a gig, so he can’t go to church that day.

Clay and Maddie go record shopping. He haggles and charms the vendor down to a low price. Afterwards, Maddie asks him to tell her more about his mood swings. They butt heads, and there’s some defensiveness involved. He does say that he masks his real moods a lot, and she says that she’s afraid he’ll hurt himself.

Juliette goes to church dressed as an Amish woman. Hallie helps her find a seat. Juliette glows through the entire service. It’s just what she needed.

The crowd at Avery’s gig loves him. He’s approached by a manager afterwards. He takes the manager’s card, but doesn’t mention it to Juliette.

Rayna visits Juliette to ask her how she’d feel about Rayna buying Luke’s record company, meaning Juliette would come back to Highway 65. Juliette tells Rayna she wants to make a gospel album. Rayna’s face freezes in shock for a moment, but then she decides to be supportive.  She wants Juliette’s album on Highway 65.

Damien is editing the music video. Scarlett stops by the editing room. Damien’s all warm and friendly to her. Scarlett doesn’t want to watch the video, but feels like she has to. She’s stunned Damien captured what she feels like on the inside. She doesn’t understand how he took such a horrible experience and turned it into that. Damien tells her he didn’t do it, she did. I’m impressed that his ego allowed him to acknowledge anyone else’s work.

Maddie and Rayna talk. Maddie tells Rayna that Clay is bipolar and refuses treatment. Rayna reacts reasonably, and tells Maddie she wants her to be happy. She deserves to be with someone who’s not crazy, if she could find someone, implying that “normal” is hard to find. But Rayna fell in love with an alcoholic, so she isn’t going to judge anyone. It’s one of the best talks that Maddie and Rayna have had in a long time.

Juliette goes to hear Hallie play with her band, the Nashville Chocolate Drops, who are the actress, Rhiannon Giddens’, real-life band, the Carolina Chocolate Drops. Juliette wants to help Hallie make a record, which we will hopefully get to watch being recorded.

Rayna and Zach go to one of Luke’s concerts to talk about buying Wheelin’ Dealin’ Records. Luke gets to sing one more song before he’s written out. Zach follows Will back to his dressing room to let Will know about the potential sale. Will is immediately nervous, because the country music business still isn’t friendly to gay artists in general. Zach reassures Will that they think he’s special and they have big plans for him. Zach tells Will to call him before Zach leaves town.Will says that Zach already seems to know a lot of people. Zach says that Will is different. They stare meaningfully at each other with the camera work that has come to mean that Will is probably about to get some, if he decides to take what’s being offered. Will he take it and become Zach’s boytoy arm candy, or will he remain faithful to Kevin and run back to him in a few episodes? He wanted every man he laid eyes on while he was with Kevin, but we haven’t seen him go after anyone since he’s been available. This is CMT, so I’m thinking he’s not going to go too wild. 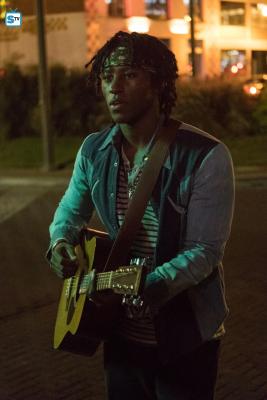 Deacon and Maddie have ice cream together while Deacon pretends that he doesn’t hate that Rayna’s with her ex-fiance. Maddie asks him how to tell when something’s right? He tries to deflect her, but she points out that he and Rayna met when they were her age. Maddie says that she’s been thinking about how complicated people are, and how hard it is to find common ground. Deacon is amazed that a 17 year old can have deep thoughts and feelings, because he’s so old that he can’t remember being young any more.

Luke says that he’s interested in selling, but he hasn’t officially told anyone. It’s clear that Zach has a spy in Luke’s office, or some other inside source. Luke also tells Rayna that he’s over their break up. He realizes now that their marriage wouldn’t have worked. He agrees to sell his label to Highway 65.

Avery finds Juliette sitting peacefully for the first time ever. They talk about what’s going on with her. She’s defensive, as usual. Hallie’s church has brought on a profound change in her. Juliette worries that the change won’t last, or that Avery won’t accept it. Emily calls them in to watch a news report. The press has discovered that Juliette has started going to church, and they’re skeptical.

Daphne is approached at school by the stalker. He tries to hand her an envelope. She and the other kids run away. The stalker is arrested and jailed, since he violated the restraining order. Rayna and Deacon are worried and scared, but Daphne is fine and goes back to classes.

Clay calls Maddie and leaves a message telling her that he understands why she isn’t returning his calls. He wants her to have a good life. Maddie finds him busking, and they work things out again. They go on a date.

Juliette and Avery go to church together. The paparazzi are outside, but let Juliette through.

Scarlett’s scene with Damien was disturbing as hell. Her faces in the video reminded me of her mother. I thought she was either going to say that he made her act and feel like her mother, or that he treated her the way her mother did. Either way, he pulled some specific information out of Gunnar last week and used it to humiliate her. He’s manipulating her by telling her that she’s weak and powerless without him around to abusively push her to face her fears and rise above them. He wants to be her Svengali.  He made sure to come between her and Gunnar so that he could break them up. Now it looks like Scarlett and Damien are out on a date next week. This looks to me like Scarlett is headed into an abusive relationship, potentially violently abusive. If that’s where it’s going, it’ll be difficult to watch, but Clare Bowen will act the hell out of it.

Next week, Rayna and Deacon are being followed by a new and improved potential stalker, and Scarlett, Gunnar and Damien promote the music video.