Jessica wakes up at the police precinct in a room with Misty Knight. She says, ‘I don’t remember anything,” before she’s even fully awake, and refuses to answer any questions. Misty has guessed a little, but doesn’t know any specific details about what happened. Jessica is concerned about Danny.

Matt wakes up next. Foggy rushes into the room to tell Matt where he is and what’s happening. Misty comes around to question him next. He pleads attorney-client privilege and won’t answer. He and Misty both conveniently use his blindness as a reason why he shouldn’t be considered a suspect. Way to work the ablism angle, Matt!

Colleen and Claire watch over Luke, who’s still unconscious from Stick’s knockout drug. Claire wonders how she got pulled into this type of mess again, when she tried so hard to avoid superheroes. She even changed neighborhoods and quit her job.

Oh Claire, the entire NYC metropolitan area is swarming with vigilantes and enhanced people, there’s no getting away from them. Plus, attracting enhanced people in need of medical care is your superpower, you have to accept that. Just find a way to make a living at it. I suggest some kind of barter system, or finding a way to get on Tony Stark’s payroll.

Luke wakes up and asks if Danny is alive. Not what Colleen and Claire wanted to hear. 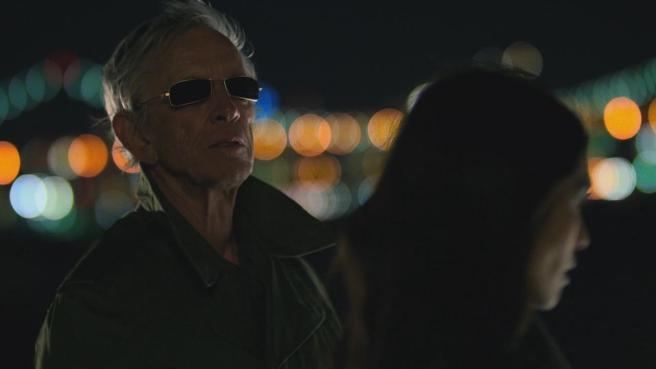 The three fingers decide to cooperate with Black Sky long enough to get the substance. After that, as Bakuto says, anything can happen.

Black Sky takes Danny down to the bottom of the underground structure in an elevator. The fingers observe. Danny’s still strapped to a hand truck like he’s a package delivery.

The Captain gets ready to book the three Defenders for obstruction of justice, but Matt insists on a private sidebar so that he can explain to them how best to cooperate with the police. Misty encourages the Captain to go along with Matt’s request.

Karen pulls Matt aside on their way to the sidebar to harangue him one more time about being Daredevil. She says she doesn’t understand why he’s doing this, when he was getting his life back. He tells her, “Karen, this is my life.

Colleen worries about Danny, and stares at the police murder board. Claire reassures her that Danny’s trained for this fight his entire life. He’s the Iron Fist. Excuse me, Claire, that’s The IMMORTAL Iron Fist.

Colleen replies that Danny’s still a kid looking for his family, just like her. She almost had a family with the Hand. She stares at the architect’s C4 pictured on the murder board.

The Defenders are taken to a private room. They compare notes. Foggy knocks on the door, and reminds Matt that he needs to keep his two lives separate. The cops need to always and only see Matt as a lawyer. Oh, and he brought Matt a change of clothes. He picked out a red outfit. Wink, wink, nudge, nudge.

When Matt goes back in the room, his official legal advice is that they bust through the outside wall of the building, and make a run for it. Guesses on who punched the wall, Jessica or Luke? It’s traditionally the man’s job, but Jessica’s very proud of her supersonic punch.

Colleen slips into the evidence room and finds the architect’s blue prints, and the C4. She steals it, and slips out of the station unnoticed.

The Defenders almost get caught because the police have put out an APB on them. They don’t have any money, but Jessica has a metrocard, so they take the subway to Midland Circle. Jessica snags a much needed beer on the way. Gotta feed the alcohol addiction.

Matt changes into his suit before they go in the back entrance to Midland Circle, through the parking garage. Gao, Bakuto, and Murakami are waiting for them.

They fight. There’s a lot of smashing of cars and cement blocks. The groups are pretty evenly matched. Gao can throw cars with her powers. Colleen shows up to turn the tide. Bakuto starts a fire as a distraction so that the Hand can escape.

Black Sky shows Danny writing on the bedrock wall of the cavern. He recognizes the style of the writing, but can’t translate. Black Sky explains that many years ago, a different Iron Fist sealed the door. The lock needs another Iron Fist to open it. Danny, of course, refuses.

Black Sky releases Danny from his cart. She tells him they don’t have to fight. She’s freed herself from her masters. He left K’un-Lun because he wanted more. He can be free as well. Danny tells her the Hand knows only fighting. He’s not afraid to confront her. They fight.

Danny and Elektra’s fight is full of flips and taunts. Elektra maneuvers Danny right where she wants him, and baits his temper, until he’s so angry that he activates the Iron Fist and punches the wall with the ancient writing.

Claire and Misty pull up in the parking garage . Misty asks how long she should stall the captain and the rest of the force when they get there, in about a minute.

Just then, Danny punches the ancient sealed wall in the right place, with enough force, to unlock it. The power goes out all over Hell’s Kitchen.

When the police arrive at Midland Circle, the Defenders, Claire, and Colleen have left the parking garage and barred the doors from the inside. Misty tells the Captain that they disappeared in the darkness.

The good guys argue over whether or not to destroy the building and the Hand. Colleen wants to take them out now. Matt agrees. The others are reluctantly convinced, even though they don’t believe in killing.

When the dust from the cave door opening clears, Danny finds himself lying in the center of a giant dragon skeleton. 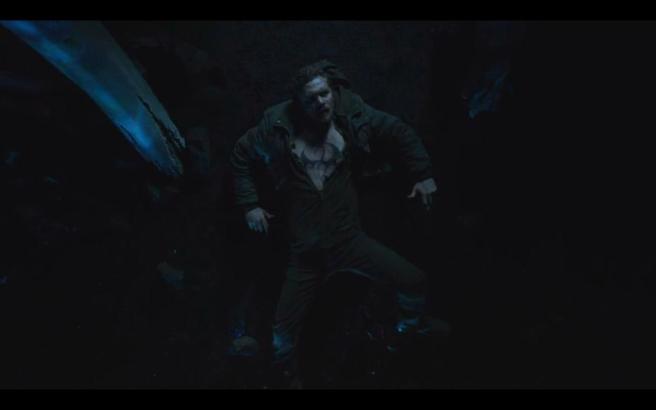 While I’m glad to see Matt unequivocally own being Daredevil, I’m sad that they had to wreck Karen’s character to do it. Karen from season 1 Daredevil would have understood how important Daredevil’s work is, and tried to help him do it safely. She, of all people, understood conspiracies and was brave. Daredevil season 2 and The Defenders have reduced her character to a plot device for arguing for normalcy and safety in Matt’s life, which he was never going to go for. It’s not in his genetic make up.

It’s good to have Colleen back in on the action. She can keep up with any of them as a warrior, and she’s been hurt by the Hand as much as any of them. She deserves to take part in the battle.

I love watching tiny little Gao use her powers and talk circles around the others. She needs to take over as mother to Elektra. Elektra can drop in unannounced for tea and advice after her murder sprees every now and then.

When Danny said the Fist doesn’t know anything but fighting, he meant it. He really shouldn’t be allowed out without a partner to do the thinking for him.

Foggy is on his way to being the great sidekick we always knew he could be. And Misty’s a real pal, too.