Moving on to the Travelers trailer:

The trailer begins with one of the major plot points from the season 2 finale, Grant’s confession video. Vincent, aka Traveler 001, made each of the team create a confession video, then sent the videos out into the world, blowing the team’s cover and revealing the Traveler program to the present day population.

In the trailer, it appears that the team took the easy way out and used the memory blocker to erase the significant others’ memories of being kidnapped and held hostage by Vincent. But it doesn’t seem to stick, if what we see of Kat and Jeff is any indication.

Grant has a new FBI supervisor who tells him that she’s in charge of monitoring his Traveler activities. That’s new. Did I catch some romantic sparks between them, now that Kat is rejecting him?

The Faction seems to be strong and working closely with the team, possibly recruiting. The arguments continue as to whether humans should trust the Grand Plan or ditch the Director.

It’s disturbing that Kat’s memory has been erased, but David has simply been told that Vincent was lying. Once again, the man’s bodily autonomy appears to be respected, while the woman is violated. Kat is right to be afraid of Grant. He doesn’t trust or protect her. But: Is Simon actually in David’s body?

In major news, McClaren insists that the mission comes first. No more distractions.

Let’s take another look at the bomb going off in the background of Seattle, or Future Seattle? Or is that a really huge, colorful fountain? A geyser? The exhaust fumes from running the Director? A science experiment gone bad? 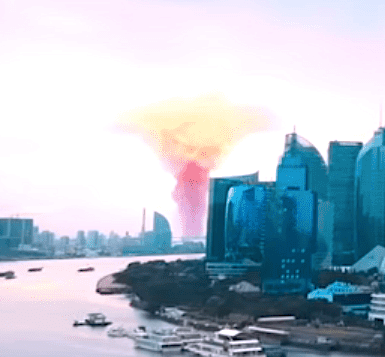 Whatever that is, a ton of energy is pouring out of it. Could it be the time stream the Travelers time travel through? Or the breach in time that opened up time travel to them?

Some photos from season 3. The team is still together, with the addition of their new FBI supervisor, Joanna Yates. They do some investigating in the woods. The other setting looks like it might be the lab where Vincent and Simon built the consciousness transfer machine. Not surprisingly, nobody looks happy. My big questions: Where is the consciousness transfer machine now? And where/who is Simon? It’ll be so disappointing if the show drops Simon’s storyline. 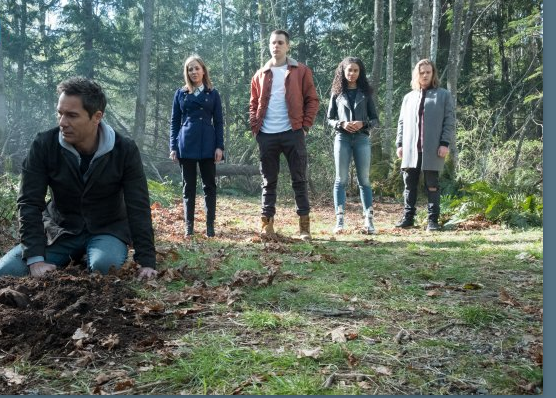 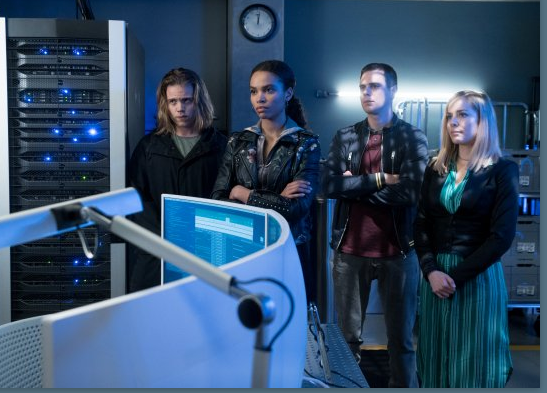 Photos by way of tvcomicsseries.com.

The clip from the first episode is at the beginning of the interview. Will gets extra scary. The rest of the interview is excellent, with discussion of the focus of season 3, Travelers mythology and behind the scenes stories about Travelers. He talks about Will & Grace for a few minutes at the very end. (Video via Reddit.)

The discussion of Travelers begins at the 6 minute mark. The clip begins at 7:36. Carly is done with Mac and Marcy’s ish. The gloves are off, and I’m here for it.

Protocol 2H: Historian updates are not to be discussed with anyone. Ever.

T.E.L.L.: The Time, Elevation, Latitude, and Longitude of what would have been the historical death of a Traveler’s host body.