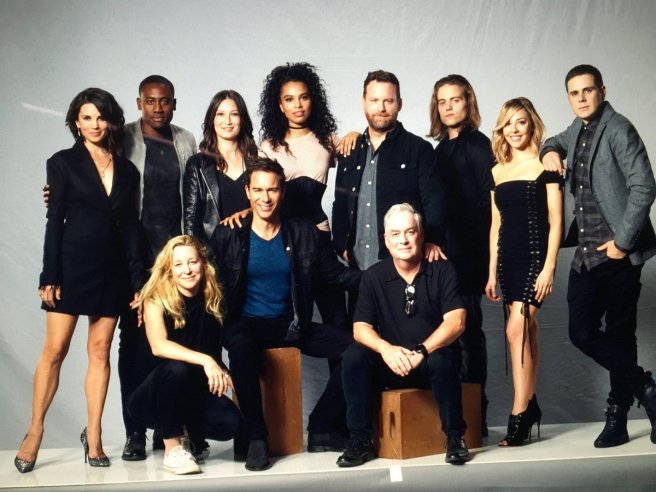 Update: Fans have started a petition to save Travelers. Sign it HERE.

“Hey, my fellow Travelers! First of all, let me say a huge thank you for your ravenous response, worldwide, to season 3. It’s been really gratifying for all of us. A lot of you have been asking about the possibility of a Season 4, but many of you have been saying, ‘Look, if this is it, what a moving and surprising and profound ending it is.’ Well, I’m afraid it is. Who knows what the future holds, but Travelers Program 1, as we call it, is complete. On behalf of our creator, Brad Wright, my fellow producers and directors, the designers, our writers, our amazing crew in Vancouver and all of the cast, who I love more than they know, I want to say thank you. All three seasons of Travelers will continue to be available for you to rediscover, and hopefully others along with you. But, for now, Protocol 5. Much love from 3468 in the 21st.”

Brad Wright’s Tweet, in which he thanks Netflix, everyone involved in making Travelers, and the best fans ever:

Thanks to the greatest cast, crew, directors, writers, artists and producing partners a guy could ask for. Love to you all. And to @Netflix for stepping up so we could make season 3! @Carrie_Mudd @EricMcCormack @TRVLRSseries #bestfansever

This is a tough one for all of us here in the Metawitches household. We watched, and debated, Travelers as a family, then recapping the show took over a month of my life each season. Very few shows manage Travelers’ mix of character drama without becoming too soapy; interesting, cutting edge science without becoming too dry or wacky; and well-paced plot momentum without including the type of intense violence that’s a turn off for my husband. If they do, they’re probably a Star Trek or a Stargate series, or cancelled after one, maybe two seasons.

If this is really the end, at least it ended with its best season and a finale that felt like it could serve as a series ender. I have a feeling they knew it would probably be the end. But I was really looking forward to watching the show reinvent itself next season.

The Travelers universe has so much potential, and Brad Wright has already created one successful franchise with Stargate. Eric McCormack referred to these three seasons as Travelers Program 1, so I think there’s reason to hope that Brad Wright will create a Travelers spin off.

I think we’ve been looking at the ending of season 3 from the wrong direction. The Will and Grace revival has been a success on NBC, so Eric McCormack has become unavailable to continue as a Traveler long-term. They separated 3468 from the others to explain his absence from the Travelers universe from here on out, rather than to ditch the rest of the cast.

Trevor told us that Travelers is a multiverse and the Director will make thousands or millions of attempts, with versions of them in each timeline. The next version of a Travelers show can include all or most of the original cast, but leave out Eric McCormack/3468. Without its most expensive star, Travelers can be revived as a cheaper show, possibly with another recognizable star, who has fewer time commitments and is less expensive. Brad Wright is probably free to shop the show around to other outlets again, unless there are already plans for a spin off that they haven’t announced yet.

Keep an eye out for Travelers: Atlantis.

By all accounts, Travelers was successful in attracting viewers to Netflix. But Netflix, like Amazon before it, is in the midst of cancelling some of its most successful shows. The giant, established streamers have discovered the wonders of cheap reality TV, and slapdash scripted programming, just as cable outlets did in the 90s. It’s a cycle TV providers go through. They start out filling a neglected niche, then broaden their output and get popular by providing higher quality programming than other outlets, then realize that viewers are accustomed to watching them, so they don’t have to provide quality any more, and can focus on pure profit. Eventually, viewership drops off, because everyone is offering the same diet of wrestling, game shows and Survivor, so we enter an era of Prestige TV, and the cycle starts over.

Netflix currently wants respect as a filmmaker and awards winner, but also to save money otherwise. It will put money into big name creators who it thinks will bring that kind of respect, and put out a lot of B movies and trashy reality fare. Genre TV usually doesn’t win awards or critical acclaim, unless it’s made by Ryan Murphy or George RR Martin, so the genre shows are getting cancelled. But, oh, look, Ryan Murphy now works for Netflix.

More on the fan effort to save Travelers.

6 thoughts on “Travelers Cancelled by Netflix: No Season 4 Planned”