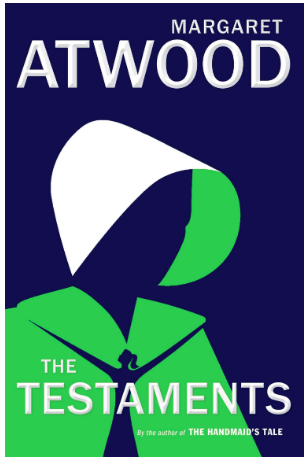 “Only dead people are allowed to have statues, but I have been given one while still alive. Already I am petrified.”

These are the opening words of The Testaments, written by one of the book’s three narrators, each of whom is already known to readers of the original book, The Handmaid’s Tale, and the acclaimed Hulu series based on the book. The words were written by the author of books, of course, Margaret Atwood, who once made a cameo appearance in the series as an Aunt.

In Gilead, Aunts are the caste of middle aged women who are in charge of other women, especially the handmaids. They are the only women who are allowed to be educated, including learning to read and write and having access to books.

In the novel, the author of these words reveals herself to be Aunt Lydia, spirited enforcer of the rules with a tendency to play favorites. The self awareness, dry wit and double entendre involved in the comment are indicative of the journey Aunt Lydia and Margaret Atwood are about to take us on. Lydia is honest with herself, if no one else, and has no illusions about what her place in history will be. But, unlike most of the women in Gilead, she chose her own destiny with her eyes wide open.

Her eyes have remained open and turned on the powerful elite of Gilead for all of the years since, just like Margaret Atwood’s eyes have remained open in the time since she wrote The Handmaid’s Tale. Both are now ready to share what they’ve been observing. While their observations are moving, entertaining and well written, they don’t sugar coat what they see.

The Testaments isn’t as difficult and shocking as The Handmaid’s Tale was when it was released only because it’s a sequel. We already know what a terrible place Gilead is and the lengths to which those in power will go to maintain control. In The Testaments, we hear Lydia’s back story and learn more about the dehumanizing treatment women were subjected to in the early days of Gilead, in order to break down their expectations for a normal life so that they would accept slavery.

We also learn more about the routine dehumanization of wives and girls. Atwood hammers home the depth of the acceptance of violence, even murder, against women in a culture where women are property, with no divorce or system of justice that recognizes most crimes against or reported by them.

Some of the modern aspects of Gilead are learned through Lydia. The rest are learned through the other two narrators, Offred’s two daughters, now known as Agnes and Daisy (or Baby Nicole). The present day, in book time, is 16 or so years after the events of The Handmaid’s Tale.

Daisy escaped with June/Offred to Canada at the end of the first book or soon after and was raised by adoptive parents. She is about to turn 16 as the book begins. Gilead is a subject she’s learned about in school and from the Gileadean Pearl Girl missionaries who frequent her parents’ thrift store. Daisy doesn’t know who she really is and serves as our window into the outside world of the present day, as well as the model for what a normal young woman is like. Her blissful ignorance doesn’t last long once the story begins, but the 16 years of normalcy she was given, including a top notch education in addition to free thinking, subversive parents, serve her well.

Agnes was raised as the daughter of Tabitha and Commander Kyle. The Commander is a distant father, but Tabitha loves Agnes fiercely. All is well for several years, until Tabitha develops a mysterious illness, and can’t protect Agnes any longer from the stigma of being a handmaid’s child. We follow Agnes through her growing up years, learning about how girls in Gilead are (barely) educated and then prepared for arranged marriages as soon as they reach puberty.

The ramifications of leaving girls uneducated are explored, both for the individual girls and for society. Both the positive and the negative sides of the worlds of upper class girls, young women and Aunts in Gilead are also explored in detail. The lives of the econopeople and the working Colonies (such as the farms) are left frustratingly mysterious.

Overall, this is an exciting, satisfying sequel that tells a complete story of its own. Book readers will have many of their questions answered and get to know and love (or despise) several new characters. It’s written such that viewers of the TV show who haven’t read the book can read it and won’t feel they’ve missed anything. The same goes for book readers who haven’t reread the book in a while.

But it feels a bit like the second book in a trilogy. There are still many, many unanswered questions. June barely features in it, and, while we find out whether Luke and Nick have survived to the present day in book time, neither appears at any point. Almost no one else from the first book appears. The structure is the same as the first book, with an appendix from a historical symposium to discuss the newly discovered documents, but this time the main subject is the historical authenticity of the testaments.

There’s at least one more story to be told here. Maybe Atwood didn’t want to spoil the end of the TV show yet, so she didn’t want to show the very end of Gilead. And even though this is an amazing, satisfying story, it’s sorely lacking June’s presence. We can only hope that Atwood is already working on the outline for a third book, making this a trilogy, which will show us the final battle that brings down Gilead once and for all, give June her final say, plus put the finishing touches on the universe she’s created.

It feels wrong to make June invisible and unnecessary in a story about the fight to get women’s power back from a misogynist regime which has stolen so much from her already. Other than that, The Testaments is a worthy, enjoyable sequel to June’s story that gives attention to the younger and older women of Gilead.

One thought on “Book Review- The Testaments: The Sequel to The Handmaid’s Tale by Margaret Atwood”