Freddie Mercury and Queen are musical legends. As with Elvis Presley and the Beatles, whether you love them or hate them, there’s no denying Queen’s talent, uniqueness and cultural impact. Bohemian Rhapsody, the film, chronicles their history, and especially Freddie Mercury’s history, with that legendary status in mind. Though he only lived to be 45, Mercury was such a larger than life, complex figure that no single film could do justice to his life and work.

This film, made under the guidance of the surviving members of the band, who still tour using the name Queen (as is their right), was created with the goal of preserving the public history and legacy of Queen and Freddie Mercury, and introducing them to new generations. In short, this film is meant to continue the legend. With that goal in mind, it succeeds.

END_OF_DOCUMENT_TOKEN_TO_BE_REPLACED 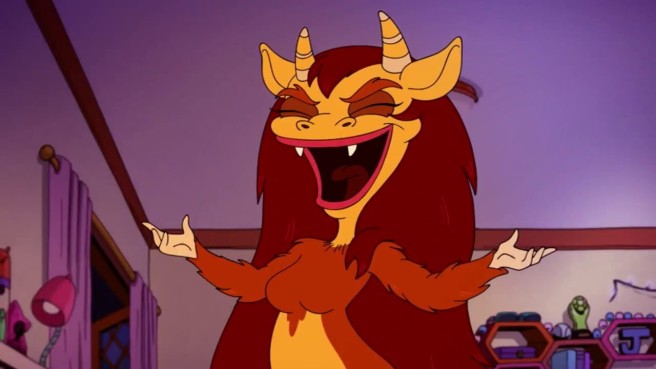 EW.com is posting their series of end of the year articles with their picks for best of everything in the entertainment world for 2018. I usually don’t get involved in those judgments, because I’m never able to pick favorites or list them in top to bottom order without long-winded explanations full of exceptions to my choices. Sort of like what’s happening with this explanation.

BUT- over the weekend, EW posted their picks for the 5 best songs of 2018 which originated on TV shows, and I have to hand it to them, as these are all great songs. I only knew of about half of them before. I have a song that I think should be added to the list, from back when Crazy Ex-Girlfriend was still putting effort into more of its songs.

I may add to this list if I remember more songs from 2018 over the next week/ish.

“This One’s for You” sung by Sara Bareilles and Josh Groban, from the 2018 Tony Awards

How is it that these two beloved, multi-talented performers, who’ve both been around for decades, have never won anything? Well, for example, Sara Bareilles’ Broadway show, Waitress, was shut out of a Tony win the year Hamilton swept the awards. Great for Hamilton, not so great for all of the other deserving shows and artists.

This song uses humor and a great melody to emphasize their camaraderie with the losers of the night, which, inevitably, was most of the audience, and to highlight the unsung heroes of Broadway, the ensemble players, who don’t win awards but form the backbone of every show. It was ironic but classy and good-natured, setting the tone for the night.

END_OF_DOCUMENT_TOKEN_TO_BE_REPLACED

Gobsmacked! is a delightful, energetic mix of current and classic hit sings sung a cappella by six singers (3 male, 3 female) with a strong beat box backup. I had the opportunity to see it at Popejoy Hall in Albuquerque a few days ago with Mr Metawitches, who is a huge a cappella fan. I wasn’t sure if it was just a concert or had a story, going in. I think it was supposed to have a very loose story, but that went right past me.

It didn’t matter a bit, though. The entire cast is mega talented and enthusiastic, giving their all for the entire performance. The show was a little less than two hours long, with a twenty minute intermission. The audience doesn’t need the intermission, but the singers do. They all use their voices continuously on every song, filling in harmonies, instrumentals, and sound effects, if they aren’t singing lead. Every sound made during the show is made by the human body, and they provide a lush wall of sound.

END_OF_DOCUMENT_TOKEN_TO_BE_REPLACED 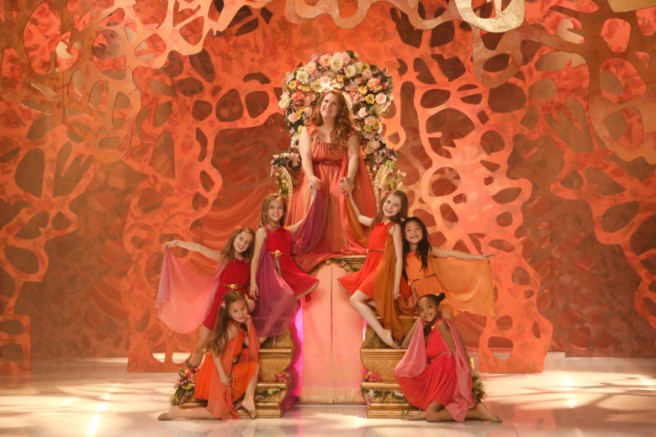 This is a photo of Paula, played by the incomparable Donna Lynne Champlin, as she sings a song from the Crazy Ex-Girlfriend season 3 finale about the glorious and joyful process of giving birth, to help Heather feel better about what she’s gotten herself into. The song sounds pretty, everything looks beautiful, and there are even laughs to be had. Champlin sounds like the talented, amazing diva that she is. But as the song continues the lyrics go off the rails, making birth sound more and more like an apocalypse on your genitals. It ends with Heather holding a fake, gray, dead-looking placenta in her arms instead of a baby.

That’s this season, and this episode, of Crazy Ex-Girlfriend in a nutshell. To write the song, Miracle of Birth, songwriter Jack Dolgen had the show’s female writers tell him their labor and delivery horror stories, then he and his cowriter Adam Schlesinger wrote the song in the studio in two hours, based on those notes. So, it’s a simplified, biased part of the experience, filtered 2nd and 3rd hand through the male point of view, turned into a rushed product. That’s season 3 of this show.

END_OF_DOCUMENT_TOKEN_TO_BE_REPLACED 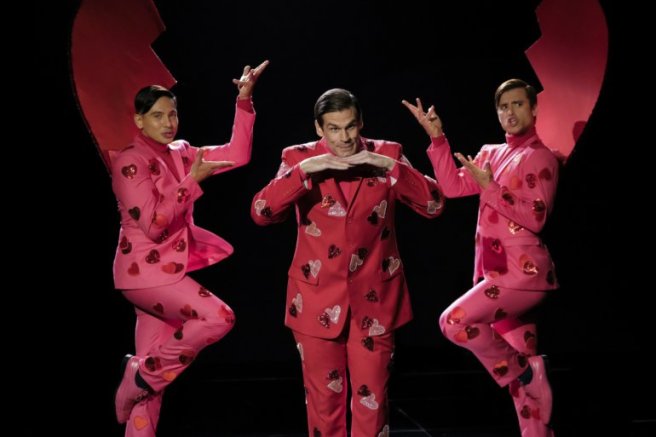 Adorable male ingenue Trent Maddock returns for a one episode love story this week. He  reinvigorates Rebecca and Paula’s friendship. Josh’s one night stand with his karaoke machine back before the time jump has inspired him to turn it into a long term relationship. He wants to turn that into a business foursome with Beth and Valencia, but Valencia is going through the townie inferiority complex that she would have gone through when she was ten years younger if she was a real, live person. Nathaniel finally makes some decisions about his love life. Heather is still pregnant. WhiJo still has a dog and scraggly facial hair, causing me to fear for his overall health.

Rebecca meets with the girls at the Sugar Shack, where she crochets an afghan and decides to get a “buttload” of cats, now that she doesn’t have a boyfriend. Because in Rebecca’s world, if you go more than 3 days without thinking someone is the love of your life, then you must not be capable of loving another human being and are doomed to be alone forever.

END_OF_DOCUMENT_TOKEN_TO_BE_REPLACED

Becks is an indie film based on the real life experiences of singer-songwriter Alyssa Robbins, who also wrote most of the songs for the film. It’s about a struggling singer in NYC who moves back to St Louis when her girlfriend leaves her to move to California. She moves in with her mother, a former nun, and starts singing at a local bar. She meets and becomes closer to a married woman, Elyse.

The lead character, Becks, is played by the fabulous Lena Hall, who won a Tony for her portrayal of Yitzhak in the Broadway revival of Hedwig and the Angry Inch, and who played Hedwig herself briefly during the opening stops of the national tour. Becks’ mother, the former nun who tries to be supportive of her daughter, is played by Emmy, Golden Globe and Academy Award-winning actress Christine Lahti. Elyse is played by Mena Suvari (Six Feet Under). Hayley Kiyoko, quadruple threat and all-around force of nature, plays Lucy, Becks’ soon to be ex-girlfriend.

This movie is worth seeing for the exciting female cast alone, but there were also women behind the cameras. Lena Hall gave an amazing, in depth interview to afterellen.com that mentions the largely female crew. From The Hollywood Reporter review:

END_OF_DOCUMENT_TOKEN_TO_BE_REPLACED 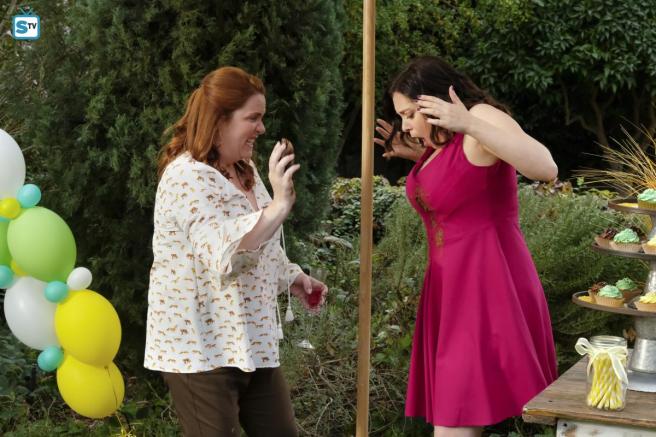 When episode 11 of Crazy Ex-Girlfriend opened with Dr Akopian in her bedroom, I had this joyous flashback to the early days of the show, when Rebecca and Heather broke into her house through the doggie door. My hopes were raised that the whiny, misogynist slog toward the finale would be interrupted by a fun, creative episode like the ones I fell in love with. But, no. That was not the case.

Instead, we got more of the pointless, endless “will they or won’t they” from Bex and Nathaniel, a huge amount of time spent on Heather realizing that being 8 months pregnant is no fun (solved by her taking a bath 🤦🏻‍♀️🤦🏻‍♀️🤦🏻‍♀️), and another Paula is a b*tch story, with a side of betrayal from former bestie Sunil, to teach her a lesson. We also had an 8 month time jump, to move the story and characters along. Except almost everyone was stuck in exactly the same place.

END_OF_DOCUMENT_TOKEN_TO_BE_REPLACED

This is the basic list of questions we ask ourselves while consuming media to help us determine if we’re seeing women being treated fairly or not. It’s not a yes or no checklist, or an easy, one sentence test, like the Bechdel test. But then, Alison Bechdel never meant for her test to become a widely used standardized instrument. This test requires some thinking about what you’re viewing. Misogyny is often subtle, and it’s pervasive. It’s easy to miss with one, casual viewing, but the message still gets into our heads and affects us.

That’s why these are guidelines, rather than a test. Some of these answers will be subjective, and reasonable people can disagree. We’re talking about art and the interpretation of art, after all. It also takes practice to start seeing things like camera angles and positioning, rather than letting it fly by. Hardly any of us can always spot gaslighting, especially when it’s being done by the writers and producers instead of the characters. These guidelines are just aspects of entertainment to keep in mind while viewing, to become more aware of what you’re seeing.

I (Metacrone) started working on this list in the late 80s, and it’s slowly grown. It’s still a work in progress, just like the entertainment industry. There are very few works that would pass every question with flying colors. Figure out how much you can live with watching, and the level that makes you take action. It’s okay to just watch and enjoy the show sometimes without feeling guilty, too. But, the more you can recognize the issues with entertainment and speak out, even if it’s only to one person, the more of an effect we all have on the entertainment industry.

END_OF_DOCUMENT_TOKEN_TO_BE_REPLACED

Fasten your seatbelts, ladies and gentlemen! Rebecca was given a “definitive” “diagnosis” in this episode. If you know anything about the diagnosis, and if you’ve read anything written by me before, you might be able to guess how I feel about borderline personality disorder.

Let’s get on with the recap, while I try to hold Metamaiden back from turning this post into one long rant about the horrors of the borderline personality disorder diagnosis and the ways it’s overdiagnosed in women, and used to control us, especially when you disagree with your elderly psychiatrist, who probably shouldn’t even be practicing anymore, as evidenced by the fact that he prescribes one medication after another that’s contraindicated for your serious chronic illness and gets defensive when you refuse to take those medications**; or your middle-aged male psychologist who decides that your near death experiences due to your illness aren’t trauma, they’re just white girl problems, while being completely sympathetic to your brother’s trauma from watching you suffer; or your middle-aged female counselor who tries to diagnose you when you’re a teenager despite that being expressly excluded in the definitions of the diagnosis.

There was a very good reason why Rebecca didn’t like what she found on the internet when she looked up her diagnosis. It’s the “my doctor doesn’t like me and thinks I’m difficult to work with because I’m a woman who questions them” diagnosis.*