This week, we find out what Yo-Yo, Piper, and the SHIELD gang have been up to while Daisy and Jemma have been in the Framework. Most of the team make their way to Radcliffe’s backdoor and the one escape from the Framework left, but one team member is caught up in the life that Aida and the Darkhold built for him. And Aida and Fitz’s Project Looking Glass machine gets its first use.

The episode begins with a flash back to 10 days earlier, when Daisy and Jemma went into the Framework. We are reminded that they have to come out voluntarily. Pulling them out might leave them brain-damaged.

The Zephyr has spent the last ten days cloaked and in the air, on radio silence. Talbot has been trying to reach them, but they aren’t sure who they can trust. Running the Framework is draining the ship’s power. They only have 24 hours left in the air until they run out, and they’ve already turned off all nonessential systems.Yo-Yo reluctantly agrees to turn off the cloaking rather than land, even though they know there are enemies searching for them. Tough call.

Inside the Framework, HYDRA has declared martial law, and there are violent riots in the streets, as the fight for control of the broadcast center continues. Looks like Coulson’s speech had an impact.

END_OF_DOCUMENT_TOKEN_TO_BE_REPLACED

This week, HYDRA memorializes fallen hero John Garrett, mentor and corrupter of Grant Ward in the real world, played by the late Bill Paxton. Our dear Madame HYDRA also falls, in a spectacular callback to Captain America: The Winter Soldier, and the nursery rhyme Humpty Dumpty. However, despite the episode title, she prefers to be put back together again by science, rather than her men.

We begin with Sunil Bakshi’s show-within-the-show, The Bakshi Report. Bakshi, who was Daniel Whitehall’s righthand man in the real world, is now Ophelia and Fitz’s mouthpiece and lackey. The topic of this episode is “Justice,” or, more specifically, the death of the Patriot. Bakshi cautions Constant Vigilance, because the Patriot wasn’t the only evil enemy of the state that could be lurking around any corner.

END_OF_DOCUMENT_TOKEN_TO_BE_REPLACED

Daisy’s two dad’s are out on their first Framework mission alone together, but Daddy Mace doesn’t remember Daisy, so he has other priorities. Mainly showing off his muscles and how intensely, seriously in charge he can be. This leaves Daddy Phil to play up his concern for Daisy, Jemma, and the rest of the kids, while proving his worth by being an excellent shot and agent overall, despite his surface cluelessness. In other words, both are acting exactly like they do in the real word.

They stage a car accident to force a HYDRA prison transport bus to stop for them, then storm the bus. Unfortunately, they find bodies in body bags instead of live prisoners. They still need to use the bus to gain access to a HYDRA prison and rescue one of the Resistance’s embedded operatives.

END_OF_DOCUMENT_TOKEN_TO_BE_REPLACED

Picking up where we left off last episode, Coulson and Daisy have spent the night catching up and are back at school the next morning. Coulson summarizes everything Skye has revealed to him, ending by saying he knew he wasn’t crazy. He can tell the difference between fact and fiction because he’s stopped using the Kree-blue mind-control soap. Instead, he makes his own. This will be a running joke for the rest of the episode, but, remember, you’re not paranoid if they’re out to get you. There’ve been way stranger weapons in the MCU. And I can’t use most soaps either, so I totally believe it’s a weapon, Phil.

Clark Gregg’s daughter, Stella, stops by to ask for help. He tells her he’s having grown up time and sends her on her way. But just then, Good Guy Ward calls to tell Skye that Hydra is on their way, so it’s time to bring Coulson in.

END_OF_DOCUMENT_TOKEN_TO_BE_REPLACED 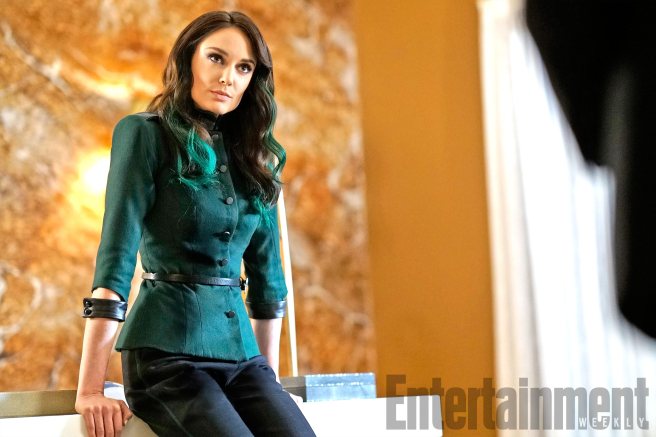 Welcome to Agents of HYDRA, the world of the Framework created by Aida, the Darkhold and Radcliffe. As you can see above, Aida’s given herself a few perks, casting herself in the role of Madame Hydra, director of HYDRA, which is charged with the safety of mankind in the dystopian world that she’s created. Be careful what you wish for.

This all came about because Radcliffe generously told Aida to solve one regret for each person she placed in the Framework. When you’re dealing with Agents of SHIELD, their regrets tend to be events that have global and historical consequences, so changing a few small decisions has a giant ripple effect. Of course, it’s not all due to Fitz, May, Coulson, and Mack opting for milder versions of the events of their earlier lives. (I think Mace wanted to be an inhuman and a true hero, while the others all wanted less violence and loss.) Aida also undoubtedly keeps tight control on the situation in the Framework, so that no one’s memory is triggered, and nothing seems unrealistic to them. It all adds up to HYDRA’s law and order, Big Brother philosophy dominating the culture with very little resistance, since Aida controls the population as a whole.

This episode opens with Skye looking at her bed, guessing about which boyfriend she’s going to find there. And, it’s door #2, consolation prize Grant Ward. She tries to take matters into her own hands, but, oops, her powers didn’t follow her into the Framework. She’s stuck with him for now.

END_OF_DOCUMENT_TOKEN_TO_BE_REPLACED

The LMD arc is one of my favorite arcs that this show has ever done. The story was compelling and a balanced combination of characterization, action and plot. All of the characters had something to do, or at least their LMDs did. We were kept guessing about the LMDs right up until the last episode. The only major disappointment was the writing for the Superior, who turned out to be a flat, boring character after his foreshadowing suggested someone more exciting. How you can make Zach McGowan boring, I don’t know, but they managed to do it. Maybe Ivanov will be more exciting as an LMD. He was offset by all of the Patton Oswalts, and all of the Mallory Jansens. Both were fun and amazing with their multiple characters. The other disappointment was the death of Senator Nadeer. I still have a small hope that she’ll turn out to have been an inhuman all along.

END_OF_DOCUMENT_TOKEN_TO_BE_REPLACED

Plus Interviews with Showrunner Jed Whedon

Aaah!! Spoilers ahead for the third pod of season 4 of Agents of SHIELD, and episode 15 if you haven’t seen that yet!

This is so exciting! Self Control was an amazing episode, and I’ll have my recap up (it’s up), but I wanted to put up the interviews and promos that are being published first. I’m not sure yet if the pod title is Agents of HYDRA or Agents of Shield: HYDRA, but HYDRA flashes in place of SHIELD at the end of the episode and in the promos, so it’ll be something like that. I was so happy to see the Triskelion intact at the end of the episode, and then to see the HYDRA logo!  The showrunners are saying in interviews that the arc will be split between the real world and the Framework, so we’ll get to see what the world would be like if HYDRA had won at the end of Winter Soldier. There’s nothing like a good canon AU! It would be incredible if they would mention what the Avengers are all doing in this brave new world, if they aren’t dead.

The interviews, promo and teaser videos are under the cut.