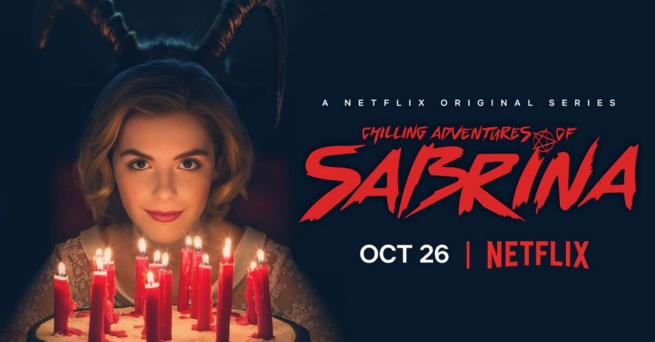 Halloween is almost upon us and it’s time for some witchy fun! Next week, on Friday October 26, two relatively lighthearted supernatural series will join the pack. NBC’s Midnight, Texas, based on the book series by Charlaine Harris, author of True Blood/the Sookie Stackhouse mysteries, will return for season 2. And the entire first season of the Riverdale quasi spin off The Chilling Adventures of Sabrina, from the same team who brought Archie, Veronica and Bughead to life, will debut on Netflix the same day.

Sabrina is based on the teenage witch from the comics, most specifically from the comic series of the same name written by creator and showrunner Roberto Aguirre-Sacasa, who is also the showrunner for the CW’s Riverdale. It’s not connected to the 90s sitcom starring Melissa Joan Hart, though I imagine the writers won’t be able to resist throwing in some inside jokes.

The show stars Kiernan Shipka as Sabrina Spellman, a half human-half witch teenager who has a big decision to make on her 16th birthday. Lucy Davis plays Hilda Spellman, the more maternal of Sabrina’s two aunts, who act as her guardians. Miranda Otto plays Zelda Spellman, a fierce, protective witch who wants Sabrina to follow in her footsteps as a devotee of the Dark Lord. (Guess JK Rowling doesn’t own that phrase.) Ross Lynch is Harvey Kinkle, Sabrina’s sweet, clueless, human boyfriend, who has no idea what’s really going on in the town of Greendale, where Sabrina’s chilling adventures take place. The cast is rounded out by Jaz Sinclair, Michelle Gomez, Chance Perdomo, Richard Coyle, and Tati Gabrielle, who play various friends, allies and enemies of Sabrina.