Episode 11 is the final installment of Agents of SHIELD before the 2 hour series finale. Nathaniel and Garrett have kidnapped Jemma and Deke and stolen the Zephyr in order to extract Fitz’s location from Jemma’s mind. They take the Zephyr into space, where the team can’t follow them, for the interrogation. In an attempt to foil Sibyl’s predictions, Daisy, Mack and Sousa use the quinjet like a rocket and follow anyway.

Back in the Lighthouse, Kora tries to convince the team that she wants to join SHIELD while she also openly helps Sibyl. It’s a reversal of the S1 split between HYDRA and SHIELD and the reveal of Grant Ward as a HYDRA agent. The Triskelion pays the price, as it always must.

In season 7’s rewind through Agents of  SHIELD’s history, this episode brings the show back to the break point in S1 when HYDRA came out of the closet, SHIELD went underground and AoS became the show that it’s been for most of its run.

END_OF_DOCUMENT_TOKEN_TO_BE_REPLACED

After spending last week in a time loop, episode 10 finds the team stranded in the 1980s again. They set up camp in the Lighthouse but are soon visited by Jiaying and Gordon, who tell them what Nathaniel and Kora are up to at Afterlife. Nathaniel recruits S1 villain John Garrett before he’s injured and recruited by HYDRA. While most of the team try to stop Nathaniel from transferring inhuman powers to villainous humans, Deke continues to work on the Zephyr’s time drive.

The episode opens in the SHIELD bar where SHIELD recruit Young John Garrett is playing darts. Adult John Garrett, who was Grant Ward’s SHIELD SO, surrogate father and HYDRA recruiter, plus S1 Big Bad the Clairvoyant, was played in a tour de force performance by Bill Paxton (Apollo 13, Big Love). Bill died in 2017, but the show pays tribute to him by bringing back the character and casting his son, James Paxton, in the role his dad originated.

Keep the box of tissues out.

Nathaniel shows up at the bar to recruit Garrett for his chaos crew by telling Garrett about his own future. Garrett doubts Nathaniel’s story about his devastating injury, abandonment by SHIELD, and recruitment by HYDRA, but I’m not sure why. Has Garrett met Nick Fury? Or Victoria Hand? SHIELD has never had a problem with leaving men behind. Even when SHIELD was the SSR and HYDRA hadn’t infiltrated them yet.

END_OF_DOCUMENT_TOKEN_TO_BE_REPLACED

In episode 9, the team get stuck in a time loop inside a time storm heading toward a time vortex. Every loop brings them closer to the event horizon, but the loops turn around quickly, so they have to work together to find a solution. Coulson and Daisy, who both start the episode unconscious, are the only ones who remember previous loops.

The episode was directed by Elizabeth Henstridge, who also plays Jemma Simmons. It’s a fast-paced, tragicomic episode that must have been hella complex to put together, but it came out great, so kudos to Elizabeth, writer Drew Greenberg, editor Kelly Stuyvesant and rest of the cast and crew. It’s hard to pull off either an episode full of tonal shifts or an episode full of repetitive scenes. To do both at once, on your first try as a director, is amazing. Joel Stoffer, Chloe Bennet, Clark Gregg and Enver Gjokaj also shine in this episode.

END_OF_DOCUMENT_TOKEN_TO_BE_REPLACED 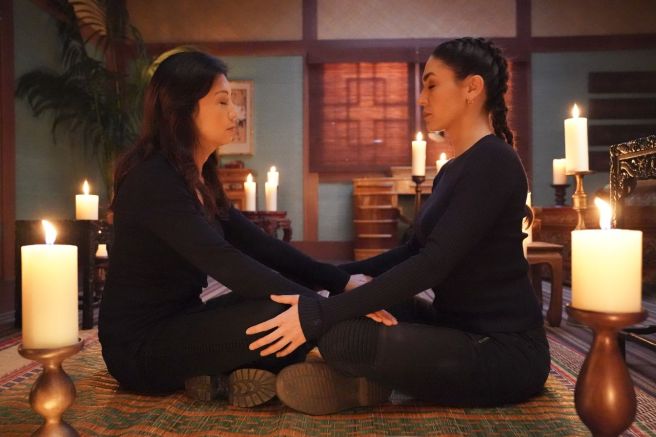 In season 7, episode 8 we find out what the rest of the team were doing while Mack and Deke were stuck in the early 80s. Jemma and Enoch attempt to fix the time drive, but realize it requires a quick fix, as in, the skills of a speedster. Now that we need them to save the team, it’s time to get serious about solving the issue with Elena’s powers.

Her powers didn’t matter to the team when the loss only affected her. It’s every man for himself in S7. There’s so little trust that even a crew of fewer than 10, who are fighting for their lives, are forming factions.

Daisy suggests they visit her mom, Jiaying, at Afterlife for a consultation on inhuman genetics and powers, so May and Elena fly there in the quinjet. Jiaying hasn’t yet been tortured by Dr Whitehall, met Daisy’s Dad, Cal, or given birth to Daisy yet, so we meet a younger, more compassionate version of the character. Spending a little quiet time at Afterlife is as illuminating and refreshing for May and Elena as it was for Daisy and Raina. The two agents also run into some new and old acquaintances.

Wait- can I put in a request for a visit from pre-terrigenesis Raina before the season ends? We should be getting to her storylines soon.

END_OF_DOCUMENT_TOKEN_TO_BE_REPLACED

Agents of SHIELD’s lucky double 7s episode is just what it says on the tin: Deke and Mack’s excellent and not so excellent adventures while stranded in the 1980s after the Zephyr’s time drive goes on the fritz. They get stranded when Mack needs some alone time after the untimely deaths of both of his parents in 1976 at the hands of the Chronicoms. Introvert Mack takes the rest of 1982 and much of 1983 as much needed “me time” to process everything that’s happened to him, probably going back to when he joined SHIELD in S2. Maybe even back to the death of his infant daughter, Hope.

Extroverted Deke makes himself at home in the Lighthouse- wait, that is his home. Poor guy, he can never get away from it. At least he always knows where he can live, rent free, in every era. Always landing on his feet is Deke’s talent, so he gets to work exercising it by creating a cover band that’s also his spy team, with the band as their cover identity. Get it?

He also keeps an eye on Mack, whether Mack wants him to or not.

END_OF_DOCUMENT_TOKEN_TO_BE_REPLACED

In episode 6 of season 7, Agents of SHIELD continues to celebrate July 4, 1976 in the Lighthouse. Coulson and May are interrogated by Rick Stoner while the Chronicoms quietly steal the faces and personalities of SHIELD agents. Mack and Elena break his parents out of the cell Hydra and the Chronicoms have locked them in. Deke discovers that Nana Jemma has become a cyborg. Enoch helps Nana Jemma with her malfunctioning cybernetic implant, Diana, which helps her stop thinking about her missing husband, Bobo Fitz.

I need one of those implants. This is a fun season, but I miss Fitz. What if they can’t get back to him at the end of this adventure? Will he be lost in time and space FOREVER? Isn’t the real world bad enough without making us worry that FitzSimmons won’t find their way back together???  #BringFitzHome

END_OF_DOCUMENT_TOKEN_TO_BE_REPLACED

In episode 5, Agents of SHIELD visits the 1970s, complete with stylish new opening sequence and bicentennial celebration for the USA. As Elena points out, we’re in something akin to a Bond film this week, crossed with a Charlie’s Angels/Starsky & Hutch hybrid TV procedural. Coulson is in his glory, but this is also the height of the Cold War and of Hydra’s hidden influence on SHIELD, which is now combined with the Chronicoms bad influence. The 70s were really just not a fun decade, okay?

However, this episode does see the return of Enoch to the Zephyr after 40 years in exile wandering the streets of NYC. Just in time, too, because something’s going on with Jemma and she needs him.

END_OF_DOCUMENT_TOKEN_TO_BE_REPLACED

Due to a glitch in LMD Coulson’s matrix as he’s rebooting from the EMP, Agents of SHIELD goes full on black and white film noir in episode 4. The team is still in 1955, dealing with Daniel Sousa and the aftermath of the destruction of Helius Project.

Sousa quickly moves on to his next assignment, transporting an artifact to Howard Stark in Los Angeles. But according to history, this was his last assignment. Once he turned the artifact over to Stark, he was murdered, becoming the first official SHIELD agent to die in the line of duty on US soil (still not letting you erase Bucky Barnes, MCU), and inspiring generations of SHIELD agents with his dedication to duty.

The history books forgot to mention that Hydra and the Chronicoms were competing to see who could get to Sousa first.

Or that there was a ragtag team of dogooders from the future trying to keep him alive.

END_OF_DOCUMENT_TOKEN_TO_BE_REPLACED

Agents of SHIELD visits 1950s era Area 51 in episode 3 and this time, they are the alien invaders. In addition to the Chronicoms, the other alien invaders who want to use a failed SHIELD science project to take over the world. Obviously.

To infiltrate the base, Jemma impersonates Peggy Carter while Coulson impersonates a second agent who’s been abducted by the SHIELD agents. It all goes great until Peggy’s old partner, Daniel Sousa (Enver Gjokaj), shows up to supervise the latest experiment.

It’s time to go back to the future from the past! But we’re not ready to go back to the present yet. First, the Chronicoms make a stop in Groom Lake Nevada, 1955, home of alien conspiracy theory ground zero, Area 51. Zephyr 1 is hot on the Chronicoms trail, so they pop into the Nevada sky soon after, startling a couple of teens who are out stargazing in the desert.

The agents quickly take stock, remembering that Enoch didn’t make it onto the ship and figuring out that they’re still 65 years from home. Coulson reasons that it’s better to be in flight and cloaked when they jump.

END_OF_DOCUMENT_TOKEN_TO_BE_REPLACED

In episode 2 of season 7, the Agents of SHIELD have to protect Freddy and get him to his rendezvous point before the Chronicoms can kill him. Knowing who he will become makes the job more difficult for some. Ernest Koenig comes along for a ride in the Zephyr.

Mack drives the getaway car as he and Deke help Freddy escape the Chronicoms with the vial of serum and some cases of bootleg liquor. Freddy convinces them the liquor is what he’s transporting to his contact and hides the vial of serum in one of the bottles.

Deke tries to contact the rest of the agents using his radio. Mack explains to Freddy that it’s like a phone. Freddy tells him it’s not working because he needs to plug it in to something.

Koenig figures out that Daisy and Coulson aren’t who they say they are and gives them a hard time. Jemma and Elena arrive, dressed in period clothes, so that Jemma can remove the bullet from Freddy’s Hydra contact. Koenig goes through more fussing over his lack of control in the situation and their dislike of his ward, Freddy.