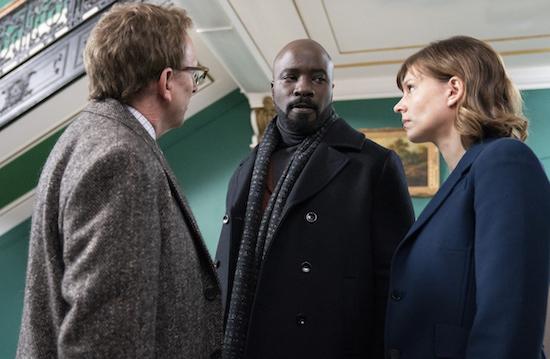 Evil’s Mike Colter, star of Netflix’s recently canceled Luke Cage, and his costar Katja Herbers, from Divorce, have a lovely working and romantic chemistry together. However, I had a little trouble moving on from his romance with Rosario Dawson/Claire Temple. After everything they went through to be together, it’s still just a little too soon.

Such are the perils of watching too much TV.

Not that Colter’s new character, David Acosta, will be getting up to anything overtly romantic with Herbers’ character, Dr Kristin Bouchard, anytime soon, since he is a Catholic priest in training and she is the married mother of four young daughters who is also the sole financial support of her family. Even though a seminary student like David, who’s only 2 years into his 5 year training program, can still walk away, especially if he entered the program out of grief and guilt over a lost loved one, as is strongly implied in the pilot. And even though a lapsed Catholic such as Kristen can break her marriage vows, especially to an absentee husband who barely contributes to the support of his family while he’s pursuing his own selfish goals.