This week, we go to the moon with Ray and the Reverse Flash! We lose another member of the Justice Society of America. And Rip figures out what the rest of us have known for a long time: Sara Lance is a much better captain than he is. I spent most of season 1 yelling at Sara and Snart to stage a mutiny. Also, a duet by Victor Garber and Dominic Purcell, which is the kind of thing that makes this show must see TV.

We start with original Rip dropping Henry Heywood/Commander Steel off in Manhattan in 1965, where he will be responsible for protecting the last piece of the Spear of Destiny. Moments later, new Rip, Nate, Amaya and Sara arrive to find them and retrieve the Spear fragment. We all know it won’t be that simple, though, or there won’t be an episode.

END_OF_DOCUMENT_TOKEN_TO_BE_REPLACED 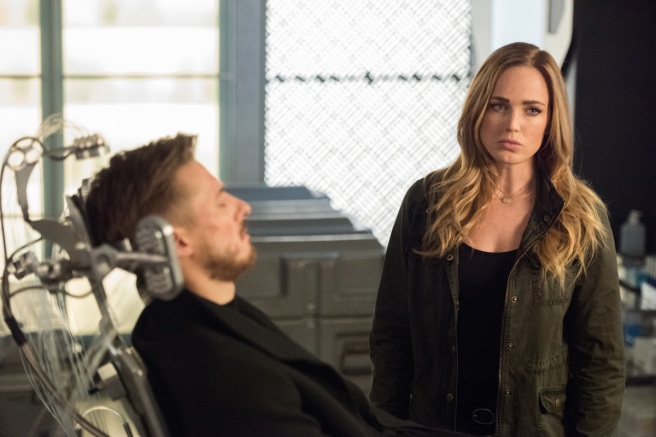 This week we finally get original flavor Rip back, or as close to it as he’s ever going to be. This show has found its rhythm in season 2 and is currently the best in the Berlantiverse at doing what it sets out to do. It’s become such a joy to watch, and on top of that we get Sara Lance fighting Sara Lance! I could’ve watched another 10 minutes of Sara on Sara hand-to-hand.

Sara and Jax are trying to find out the location of Nate’s grandfather and the last piece of the Spear of Destiny using the medallion, interfaced with Gideon. Things aren’t going well. Nate rushes in, all rude and impatient with Gideon. Gideon doesn’t appreciate the slight. Best not to insult the AI who runs the ship you live in, buddy.

Evil Rip is still in the brig, and calling for Gideon. She tries to ignore him, since she’s not supposed to talk to the bad man, but finally relents to tell him she’s supposed to ignore him. He uses three code words on her: “Spaniel, broad, bicycle.” She tries to refuse the order, but Rip repeats it. The brig door opens, and every other door on the ship slams shut. The team realizes what Rip is doing.

END_OF_DOCUMENT_TOKEN_TO_BE_REPLACED

This week’s opening narration brought to you by Mick Rory:

“Seriously, you idiots haven’t figured this out by now? It all started when we blew up  the Time Masters. Now history’s all screwed up and it’s up to us to unscrew it up. But, half the time we screw it up even worse. So don’t call us heroes. We’re something else. We’re legends. Who writes this crap, anyway?”

Sometimes I wonder that myself.

Christmas Day, 1776. Rip Hunter has killed George Washington, and is now supplying the British army with modern weapons. This is a set up to attract the Legends so that Rip can kill his former teammates and acquire their piece of the Spear of Destiny. Rip tells Eobard that he’s looking forward to having fun with the plan.