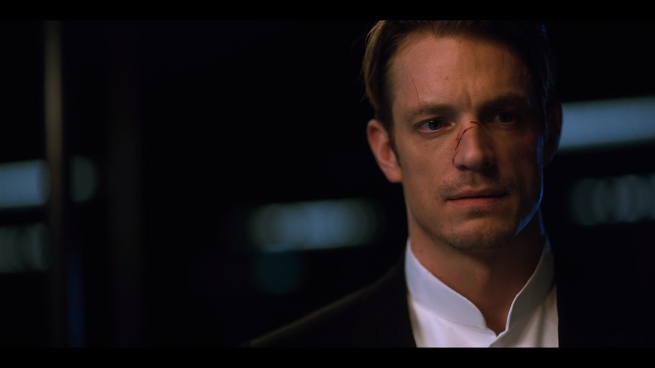 Laurens: “In this world, the only real choice is between being the purchaser and the purchased.”

Kovacs: “We stick together, Rei. Never face the monsters alone.”

In this episode, Laurens invites Tak to a dinner party attended by all of Lauren’s closest enemies. Both spend the evening evaluating and testing people, though Tak is trying to assess how likely each is to be a murder candidate, while Laurens is assessing how likely they are to challenge his dominance or resist his authority. Laurens makes a point of publicly humiliating Tak, to remind Tak that he’s owned, because Laurens owns almost everything. Laurens also goes out of his way to humiliate Ortega, and to remind his wife that she belongs to him. He’s very possessive and territorial, and this hour drives it home.

Tak, on the other hand, begins assembling his own team in earnest, doing favors and making deals. Poe and Vernon are his first two prospective team members. He brings in another guest for Poe, Lizzie Elliot. Her virtual psychosurgery requires a large amount of Poe’s time and attention, just the thing for a lonely AI. That frees up Vernon to act as Tak’s back up at the party, once they’ve visited the friendly neighborhood arms dealer. Vernon gets to investigate Bancroft connection to Lizzie’s attack while he’s there, and Tak doesn’t have to face the monsters alone.

END_OF_DOCUMENT_TOKEN_TO_BE_REPLACED

Altered Carbon is my new guilty pleasure. Do we still have guilty pleasures? I don’t care, that’s what it is. It may or may not make the cut for prestige television when the critics are done deciding, but, after watching 3 episodes, I’ve decided I’m just going to have fun with it. It’s not the best, or the worst, or the first, or the most, of anything. But it is a hardcore, pulpy, scifi cyberpunk neo-noir murder mystery with a detective who’s both completely futuristic and a total throwback. This show is not taking itself too seriously while still including all of the essentials of its genre(s). That means that we can all relax and enjoy the ride.

Altered Carbon is based on the 2003 novel by Richard Morgan. It stars Joel Kinnaman (The Killing) as Takeshi Kovacs, a former mercenary and legendary rebel soldier who fought against the Protectorate, the universal government of the future that’s run by the wealthy. He was caught and imprisoned 250 years ago.