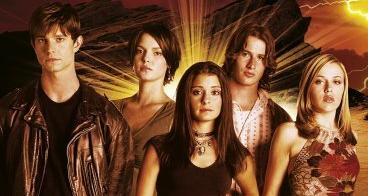 The original TV series Roswell (not to be confused with the new CW show Roswell, New Mexico) ran for 3 seasons on The WB (seasons 1&2) and UPN (season 3), from 1999-2002, for a total of 61 episodes. The show was very loosely based on the YA book series Roswell High, written by Melinda Metz. Jason Katims (who later went on to create Friday Night Lights and Parenthood) created Roswell and stayed on as showrunner for all three seasons.

Roswell takes places in the real life small town of the same name, in southern New Mexico, where a mysterious crash in 1947 has become legendary in the decades since it happened. The alien spaceship crashed out in the desert, leading to rumors and guesses about what really happened, which quickly led to a government cover up. Roswell houses a military base which took part in an investigation of the ship and secret alien remains. The town itself has embraced its notoriety as an alien and UFO Mecca, with businesses and events throughout the town sporting space themes and catering to alien-hunting tourists.