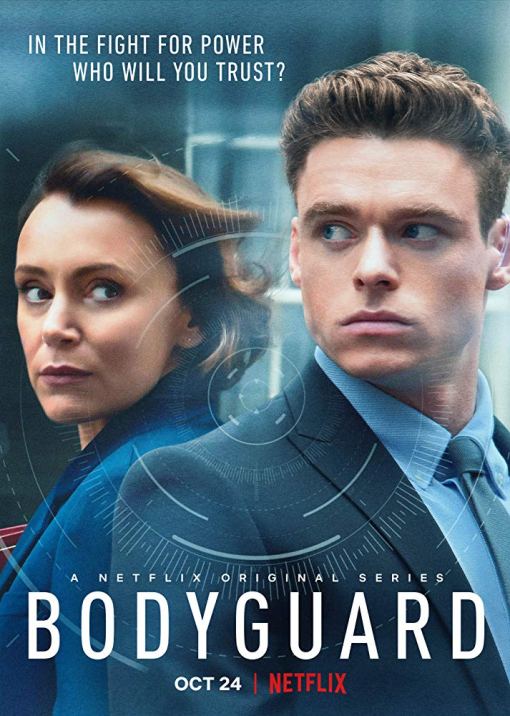 Bodyguard is a 6 episode BBC crime thriller that’s been released globally as a Netflix Original. Created by Jed Mercurio (Line of Duty) and starring Richard Madden (Game of Thrones) and Keeley Hawes (The Durrells in Corfu), Bodyguard has no connection to the 1992 Whitney Houston/Kevin Costner movie The Bodyguard. Last fall, Bodyguard became a ratings sensation in the UK, where it was shown as a weekly series and broke viewing records.

There is good reason for that. The show is gripping and intense from the first minute, when we meet main character David Budd, an Afghanistan veteran with untreated PTSD who is currently working for London’s Metropolitan Police Service as a Principal Protection Officer (PPO), or as we layman think of it, a bodyguard, for important members of the British government. He’s traveling on a train with his two children and discovers a suicide bomber, Nadia (Anjli Mohindra) hiding in the bathroom at the end of their car. In the powerful opening sequence, David takes it upon himself to talk Nadia down so that everyone comes out of the situation alive, disobeying orders from the bomb squad as he works with Nadia to ensure that she’s captured instead of killed.

After his heroic success on the train, David gets noticed by his superiors, and promoted to protecting the controversial, right-wing Home Secretary*, Julia Montague. Montague is pushing for legislation that would allow increased surveillance by law enforcement agencies, an idea that’s unpopular with many in the public and in the government. She’s also ambitious and widely believed to be considering an end run around the usual channels in order to become Prime Minister.