This episode is the third part of the three part introduction to the series. We’re done with the night of the Pride ritual, and it’s time to cope with the morning after.

The episode begins with a flashback to ten years ago, when everyone attended the funeral of Molly’s parents, who died in a house fire. The entire Pride, and their children, are there. Little four year old Molly sits alone in a tiny wheel chair with a pink cast on her right leg. She’s next to the Yorkes, who look devastated. The entire Pride has the grace to display varying levels of sadness, except for Tina, who looks like the funeral is making her miss another board meeting. The distaste and impatience on her face are palpable.

After the funeral, everyone gathers together for food and memories. Tina conspicuously pulls her sleeve down to cover the thick bandages on her right hand and arm. Geoffrey confronts Robert about Pride members potentially murdering each other, but Robert insists it was a cooking accident. He implies that he didn’t see the cooking accident, saying he’d know if she’d done something to the Hernandez.

END_OF_DOCUMENT_TOKEN_TO_BE_REPLACED 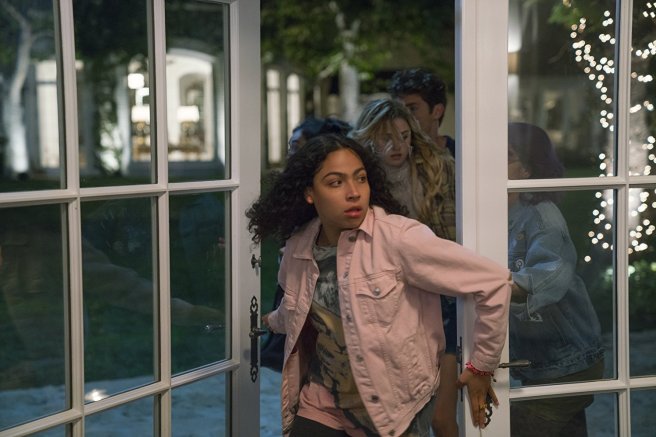 In episode 2 of the Runaways, aptly titled Rewind, we spend most of the episode within the same time frame covered by episode 1, Reunion. This time around, we spend more time with the parents, who are full of secrets. Every family is keeping more secrets from their kids, and each other, than just the true nature of the PRIDE.

The episode opens on the moment when Molly takes her photo of the Pride ritual. The kids and parents all try not to panic. Tina suggests that the flash may have been light from the staff bouncing off the sound barrier she created.

The kids run upstairs and try to escape, but the secret passageway door has automatically closed and locked. Molly uses her new super strength to force it open. None of the other kids realize what she did.