Episode 3 of Prodigal Son begins with a nightmare, as all of Malcolm Bright’s days do, but this one is particularly memorable. More on that later.

The episode improves for him, as he has an exciting murder case to solve that involves one of his psychology idols and a unique MO. His mother, Jessica, has also discovered that Malcolm is seeing his father again and she goes to great lengths to disrupt their relationship, as she has with both of her children since Martin’s arrest.

If he weren’t such a notorious psychopath, and she weren’t such a dedicated single mother, the steps she’s willing to take in order to keep her children and husband from speaking to each other might make you suspicious.

END_OF_DOCUMENT_TOKEN_TO_BE_REPLACED 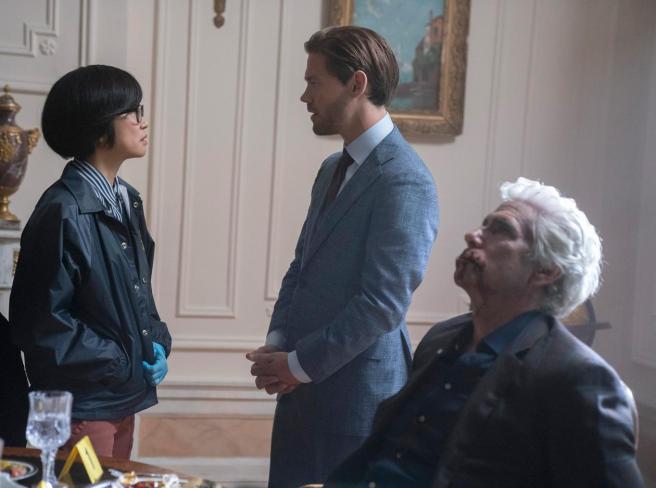 In episode 2 of Prodigal Son we learn that the chemistry between Malcolm and Edrisa is real and he really needs this job to help keep him sane. We also learn that though sane might be a relative term where Malcolm and his family are concerned, that’s what makes him really good at what he does. He’s trying to solve a mystery within himself while he’s solving murders and the answers could save him or end him. Dear old Dad is no help whatsoever, but it’s fun to watch him torment his son, who can’t quite stay away.

Did I say fun? I meant creepy as H*ll. This was a freaky episode, with snakes and poison and Michael Sheen doing his best Chucky impression. Poor Malcom actually had to get tucked into bed at the end, it was so distressing. Thankfully, it wasn’t by either of his parents, at least not in the present day. They only tuck him into bed in his night terrors.

END_OF_DOCUMENT_TOKEN_TO_BE_REPLACED

Hey kids, how about we check out Fox’s new crime drama/psychological thriller, Prodigal Son? It stars Jesus and the angel Aziraphale as the titular prodigal son and his serial killer father, so how can we go wrong?

Tom Payne, who played the character nicknamed Jesus on The Walking Dead, stars as Malcolm Bright, an unstable but brilliant criminal profiler who changed his last name to distance himself from his father’s notoriety. Michael Sheen, who played the angel Aziraphale in Good Omens, plays his father, Dr Martin Whitly, AKA The Surgeon, a notorious serial killer.

The Surgeon was arrested and imprisoned when Malcolm was a child. For many years after, the two worked together during Malcolm’s regular visits in an attempt to understand the minds of serial killers, at first in order to answer Malcolm’s questions about his father and himself. Later, their work continued as part of Malcolm’s college education.

Five minutes in, it’s clear that Prodigal Son with be depending heavily on Michael Sheen’s ability to smile insanely and Tom Payne’s wild yet sympathetic blue eyes to sell their characters and the storylines. The show has put the TV series House, Mindhunter, Hannibal and American Horror Story all together in a blender and added a its own talented cast.