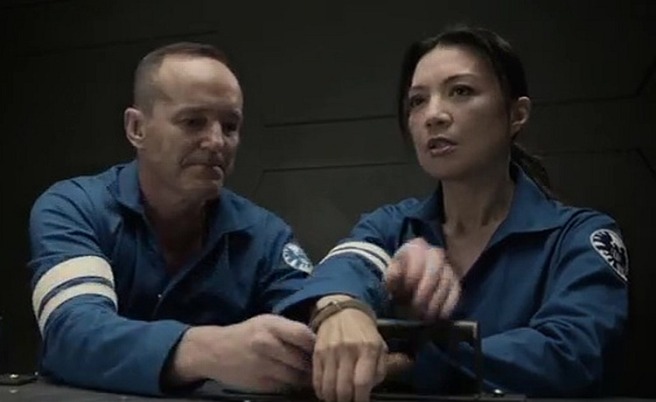 In episode 6 of season 7, Agents of SHIELD continues to celebrate July 4, 1976 in the Lighthouse. Coulson and May are interrogated by Rick Stoner while the Chronicoms quietly steal the faces and personalities of SHIELD agents. Mack and Elena break his parents out of the cell Hydra and the Chronicoms have locked them in. Deke discovers that Nana Jemma has become a cyborg. Enoch helps Nana Jemma with her malfunctioning cybernetic implant, Diana, which helps her stop thinking about her missing husband, Bobo Fitz.

I need one of those implants. This is a fun season, but I miss Fitz. What if they can’t get back to him at the end of this adventure? Will he be lost in time and space FOREVER? Isn’t the real world bad enough without making us worry that FitzSimmons won’t find their way back together???  #BringFitzHome

END_OF_DOCUMENT_TOKEN_TO_BE_REPLACED

Ok kids, it’s time to head back to the 1930s for the final season of Agents of SHIELD, a show which has traveled the world, moved through space and time, explored how far the human mind and body can be pushed and invented or transformed almost every sort of scifi tech imaginable. This season, they play in what’s probably the only sandbox they’ve left unexplored, the past, specifically SHIELD’s past, which also happens to be the MCU and Avengers’ past as well.

This season begins a few seconds before last season ended, in order to remind viewers of the shocking changes that Jemma Simmons introduced Mack and Daisy to in the final moments of season 6. The Chronicom subplot which played second fiddle to the Sarge/Izel/Shrike war in season 6 now moves to the forefront, having turned into a full blown time war. The Chronicoms hope to wipe out SHIELD so that they can then conquer Earth and turn it into their new homeworld, Chronyca 3.

SHIELD is a formidable adversary in the 21st century, so the Chronicoms decide it would be easier to beat them earlier in SHIELD’s history. The aliens have (probably) used the mindscans they made of Jemma and Fitz in season 6 to develop time travel, which they now use to go to significant points in the 20th century in order to change SHIELD’s history. If episode 1 is any indication, the Chronicoms have dug deep in their examination of history so their targets aren’t necessarily obvious ones, but the connections to old friends sure are fun.

END_OF_DOCUMENT_TOKEN_TO_BE_REPLACED

Episode 22, The End, closes season 5 of Agents of SHIELD, and, as promised in the promos, not everyone makes it out alive. It’s an emotional episode that ties up the Graviton story, at least for now, and settles the question of who’ll succeed Coulson as director of SHIELD, at least for now. The season is wrapped up nicely at the end of the episode, but there’s a clear set up for season 6. I’m still reeling from everything that happened in this episode, and wondering about some of the dangling threads that were purposely left hanging.

Coulson lies unconscious in the infirmary, not dead yet, but inching ever closer. Deke listens from the hall as the team argues about whether to save Coulson or save the world. They don’t currently have a way to get the centipede serum/odium mixture into Talbot, even if they decide to use it on him. Fitz suggests that having Talbot absorb someone who has the serum might work. Mack, of course, is upset that Fitz went there. Fitz tells him it’s a hypothetical suggestion.

There Fitz goes, using big words and getting all sciencey and theoretical again. Next thing you know, he’ll try to get Mack to believe in climate change or that the earth is more than 6,000 years old.

END_OF_DOCUMENT_TOKEN_TO_BE_REPLACED

This week, the Invincible Three learn that invincibility, like magic, comes with a price, as the prophecy/time loop plays out all over again. Ruby’s dreams start coming true along the way, bringing her closer to becoming the Destroyer of Worlds. Deke confesses his feelings for Daisy, which doesn’t bode well for his long term survival, if history is anything to go by. But, hey, Ghost Rider was technically dead before he met Daisy, so he’s just banished to an alternate dimension instead. Maybe the guy from the future will get a creative send off as well.

It’s an action packed episode, with a few laughs, a few revelations and some heartbreak thrown in for good measure. With only five episodes left in the season, and possibly the series, we’re racing toward the big finish. Every episode feels like it’s part of the set up for whatever is coming in the grand finale.

END_OF_DOCUMENT_TOKEN_TO_BE_REPLACED

This week, SHIELD goes back to its roots as a spy organization, and does some legwork that the Black Widow would be proud of. It’s a quieter, more light-hearted episode after last week’s emotional roller coaster ride, but family and loss are still themes. Deke figures out who his grandparents are and remembers his beloved mom, while Mack reaffirms that he’s not going to think of Elena as a robot just because she has robot arms. In the run up to Infinity War and Thanos, the show also brings up familial abuse, both as physical abuse and as the abuse of power. Hale becomes a stand-in for Thanos, and her team, especially Ruby, become alternates for Thanos’ children.

And Werner von Strucker is back! He’s still institutionalized, but out of his Ward-induced vegetative state and being threatened with heavy doping via Thorazine. He’s also using his favored alias of Alex Braun, but his therapist seems to know his full history and identity anyway.

His therapist wants Werner to show motivation toward making progress in therapy by revealing as much information about his past as possible, so that Werner can avoid the thorazine. Werner, however, has developed powers after being trapped in a particular memory in the memory recall machine while in a persistent vegetative state, then being shocked out of the memory loop by Lincoln Campbell zapping Werner with inhuman electrokinetic powers.

Now Werner remembers everything that’s ever happened to him, and every detail of his surroundings, no matter how small. He also seems to have enhanced senses, though I’m not sure Werner realizes that yet (or the writers 😉). He read the small type on an envelope in the trash from across the room, and heard the other side of a phone conversation through a wall. That’s not normal hearing or vision, and may be part of why he’s so out of control. Both hypersensitivity and psychic powers have a long tradition of driving people mad until they get a handle on their powers.

END_OF_DOCUMENT_TOKEN_TO_BE_REPLACED

Fitzzz!! He’s back, in disguise, the time traveling man with a plan! I feel safer already, even if he does want Daisy to fight to the death. His Boba Fett/Star Lord disguise is totally about pretending to be the coolest, richest guy in the quadrant so that Kasius will want to impress him, and Kasius loves a good death match. Fitz’s framework persona will come in handy for acting the part, if I’m right.

It’s a busy episode, with several important reveals before Fitz arrives at the last moment, and a distinct lack of Maya. Let’s get started.

Kasius steals Daisy’s blood as he tells us about his heroic rescue of the human race for fun and profit, spurred on by his vision that he could make a killing in the inhuman trade, if he used the remnants of earth as his own breeding program. Senara looks bored to tears. He probably pulls out this story every time he gets drunk.