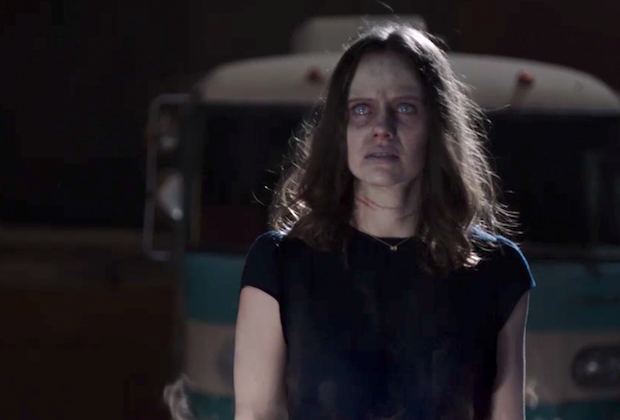 In the shocking ending of  Midnight, Texas, season 2, episode 6, No More Mr Nice Kai, Manfred discovered that his once and possibly future girlfriend, Creek Lovell, was dead. Creek left town at the end of season 2, episode 1, Head Games, in order to go to college and find the peace of mind and personal safety that eluded her in Midnight. She came back to Midnight in episode 6 because she thought Manfred needed her and she missed him. Instead of being allowed to return to her new life, she was murdered.

The last time we saw Creek alive, Kai discovered her in the hotel, searching for Manfred. The next time we saw her, she was a ghost. She was able to speak to Manfred, but she quickly burned up and was forced to move on to the next plane of existence. The fire started in her throat, probably to stop her from speaking.

The normal way that ghosts move on to the next plane is to disappear. They become gray smoke, which then vanishes. This is how Lyric moved on. We saw it frequently in season 1. The only other ghosts who’ve disappeared in fire, the way that Creek did, were Bruce and Carolyn, the married couple who’d owned the hotel in the 50’s, who we met in episode 2. Fiji used an ancient spell to send them on their way, which required the bones of the dead, sage, and a goat’s heart. The flames burned the ghosts in the same order that they burned their bones. In the case of Bruce and Carolyn, that was bottom to top. Carolyn was able to give Manfred a message, “There are secrets behind the woods,” because her head and neck were the last parts to go.

END_OF_DOCUMENT_TOKEN_TO_BE_REPLACED

Midnight, Texas is a weird show. It’s fun. It’s sexy. With all of those shirtless men and relationship plotlines, it’s clearly aimed at women. It’s based on a series of books by Charlaine Harris, who is a famous and successful woman.

Unlike True Blood and the Midnight, Texas books, this TV series kills off its female characters right and left. In episode 6, Creek returns to Midnight, only to be fridged by the end of the episode. Time after time this season, we’ve watched the women be killed or duped, while the men leave town alive, or overcome whoever cons them. After the deaths of Creek, Lyric, Sequoia, and Mary’s mother, Sheila (just to name a few off the top of my head), will the Rev and Mary the baby weretiger’s father be returning Midnight to be murdered in episode 7, and will Olivia’s father die the week after that, to help balance the scales?

This show’s history suggests that a woman from Midnight will sacrifice and be punished in some major way before the end of the season. It will probably be Fiji, with Patience as the dark horse coming up strong from the outside. Trace Lysette’s character Celeste will likely be brought back to die. Fiji has already given up her heart, and the aunt who raised her, to the dark side, but the town will rescue Bobo’s true love. She’ll be contrite for overreaching and daring to think she could handle dark magic as a mere woman (of color).