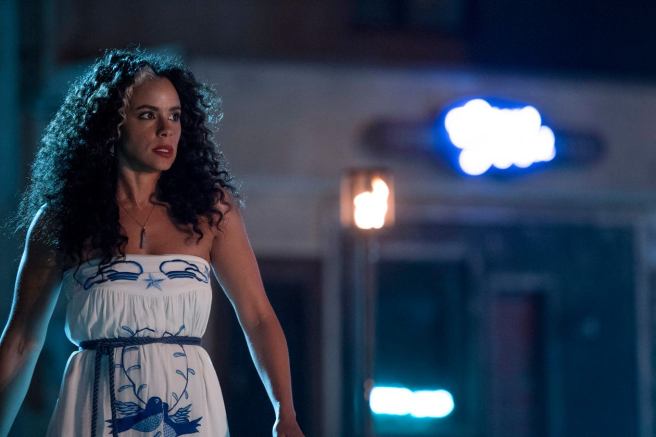 Yasss, Queen, episode 9 of Midnight, Texas’ 2nd season, serves as both the season and the series finale. This season’s storylines are wrapped up in spectacular, over the top fashion. The producers are shopping the show to other networks, so it could get more seasons eventually, and the episode ends with set ups for the next season, but nothing that takes away from the satisfying conclusion that’s already been reached.

I’m hoping that Netflix will pick up the show, since it’s already filmed here in Albuquerque, where Netflix is creating its North American studio. Plus, Midnight would fit right in with Sabrina and Lucifer, which Netflix picked up after Fox dropped it.

END_OF_DOCUMENT_TOKEN_TO_BE_REPLACED

Midnight, Texas is a weird show. It’s fun. It’s sexy. With all of those shirtless men and relationship plotlines, it’s clearly aimed at women. It’s based on a series of books by Charlaine Harris, who is a famous and successful woman.

Unlike True Blood and the Midnight, Texas books, this TV series kills off its female characters right and left. In episode 6, Creek returns to Midnight, only to be fridged by the end of the episode. Time after time this season, we’ve watched the women be killed or duped, while the men leave town alive, or overcome whoever cons them. After the deaths of Creek, Lyric, Sequoia, and Mary’s mother, Sheila (just to name a few off the top of my head), will the Rev and Mary the baby weretiger’s father be returning Midnight to be murdered in episode 7, and will Olivia’s father die the week after that, to help balance the scales?

This show’s history suggests that a woman from Midnight will sacrifice and be punished in some major way before the end of the season. It will probably be Fiji, with Patience as the dark horse coming up strong from the outside. Trace Lysette’s character Celeste will likely be brought back to die. Fiji has already given up her heart, and the aunt who raised her, to the dark side, but the town will rescue Bobo’s true love. She’ll be contrite for overreaching and daring to think she could handle dark magic as a mere woman (of color).

END_OF_DOCUMENT_TOKEN_TO_BE_REPLACED

The intense spellwork continues from last episode in the new episode of Midnight, Texas, and Fiji isn’t the only one practicing. Guests in Midnight, who may or may not be welcome, also dabble in magic spells.

Another magical practitioner, Kai, returns home with his “assistants”, Lyric and Sequoia, in tow. Even though Kai’s wife, Patience, is tucked in bed with Manfred when Kai calls to let her know he’s back, there don’t seem to be any bad feelings between them. But soon there is a dead assistant, Sequoia, in the lobby. Manfred’s initial investigation makes him suspicious of Kai.

The fact that Kai never releases the supernatural energy he absorbs, which has bothered me all season, is finally addressed, in a big way.

END_OF_DOCUMENT_TOKEN_TO_BE_REPLACED

Midnight, Texas was a good show last year, but it’s improved to become a great show, within it’s genre, this year. It’s a fun, sexy, funny, slightly scary, thought-provoking romp through Charlaine Harris’ world. It’s True Blood Lite, and that’s not a bad thing. True Blood was amazing, but it also took itself too seriously at times and went off on some ridiculous tangents. Not to mention the gore.

Midnight Texas can be watched by a general audience, but it’s not just fluff and vampires. The characters have chemistry and have developed a bond that makes the drama they go through compelling. The supernatural elements are often used as metaphor, which gives the show relevance. But Midnight never forgets to have fun, and if all you want from it is a relaxing Friday night, you can ignore the larger implications easily.

Midnight, Texas is my choice for this season’s best show that nobody’s watching.

END_OF_DOCUMENT_TOKEN_TO_BE_REPLACED

As we move toward the darkest time of the year, it’s a dark time in Midnight, Texas, too. Multiple hearts get broken on episode 3, To Witch Hell and Back. Some are demon hearts, so we shouldn’t be too sad, because no one likes a demon, right? But some belong to our favorite Midnighters, who’ve survived many obstacles already to be together.

Fiji and Bobo continue to investigate the supernatural cause of Bobo’s accidents, now with Manfred’s help. Manfred has given up on his dream of reuniting with Creek, and placed all of his hope in keeping his friends happy and together. How much struggle and heartbreak will the three of them have to endure?

With a Hunter’s Moon on the horizon, Chuy spends the night on the couch pacifying his inner demon. Joe, still looking for fulfillment in his life, meets up with that hussy Walker, the demon hunter, to go kill some demons without telling Chuy. Call me crazy, but I just don’t see a relationship that starts with a lying angel ending well. Walker isn’t good for Joe.

END_OF_DOCUMENT_TOKEN_TO_BE_REPLACED

In this episode of Midnight, Texas, the #Me Too movement takes a distinctly supernatural turn, as ghosts, vampires, and vampire wives all stand up to the oppression of the patriarchy, with varying results. The moral of the story is, we are stronger when we fight together, but violence isn’t the answer. Or it almost never is. Maybe the moral is to use your powers wisely so the daddy/husband vampire won’t find an excuse to try to take them away from you again. Or, put more simply, don’t get caught red-fanged. Channel Olivia or Fiji, not Dawnette.

The discussion as to why it’s fine for all of the men who hurt and exploited Dawnette to run around unpunished, and for Lem and the Rev to run around unpunished, while Dawnette has to quickly be made contrite and powerless again, will have to wait. Suffice it to say, broadcast audiences don’t want to see an angry, scary, powerful woman go unpunished, no matter how righteous her anger or deserving her victims. And a combination of misogyny, racism and classism dictates that a woman like Dawnette couldn’t be trusted to learn to control her power or anger, even though Lem did. They might as well have made her stripper name “Rebel China Doll”.

Episode 2 opens with Healer Kai curing a man’s elbow pain at the Crystal Desert Hotel, using the same basic procedure that he used to cure Manfred of his demon cancer in episode 1. He ends with sucking the negative energy out through the man’s mouth and into himself, but we never see him release it, just like the last episode. Kai’s two, ahem, loyal assistants, Lyric and Sequoia, are there to help.

END_OF_DOCUMENT_TOKEN_TO_BE_REPLACED 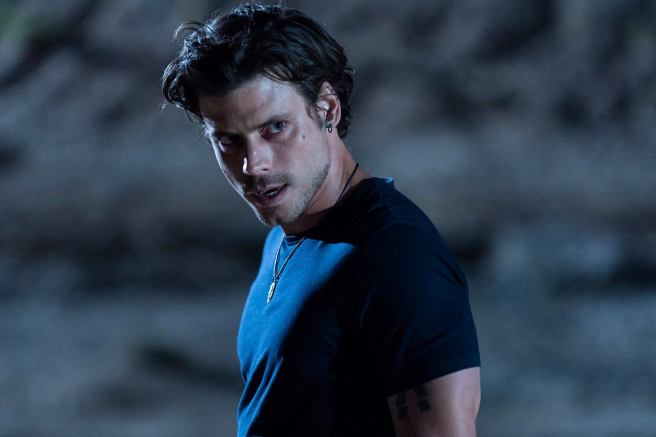 It’s time to return to Midnight, Texas, or to visit for the first time if you’ve never been. There just happens to be a new hotel in town, owned by a renowned healer and his lovely wife. They can help you with anything from a crystal meditation session to rebalance your energy to an exorcism of your terminal demon cancer. And anything that might require a severed demon head, but let’s keep that between you and me. Healer Kai seems to want to keep his frequent sessions with the head private.

The town’s resident psychic, Manfred Bernardo, is a bit under the weather this week, having never fully recovered from last season’s finale, when he allowed 6 demons to possess him at once, so that he could drive away a really powerful demon, Colconar, who wanted to own the town’s resident witch, Fiji. The demons left a little something behind inside Manfred that’s slowly taking him over. The fact that it’s enough to bring his ghostly grandmother, Xylda, back from the hereafter, might make the whole thing worth it.

Other than Manfred and his girlfriend Creek, who are understandably having some relationship issues, the town’s couples are doing great. Bobo and Fiji are having such great sex that they don’t just feel like they’re flying, Fiji’s head actually hits the ceiling. Lem and Olivia now share a psychic connection to facilitate their wedded bliss, since he fed her some of his blood to heal her after she was gravely injured. He doesn’t have to be told which spot is the right spot anymore. And Joe and Chuy are as centered and peaceful as ever, or so it appears. Chuy is doing a lot of yoga to get his demon side back under control.

END_OF_DOCUMENT_TOKEN_TO_BE_REPLACED 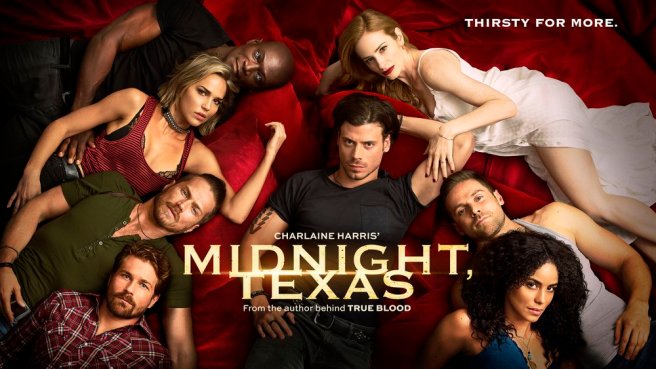 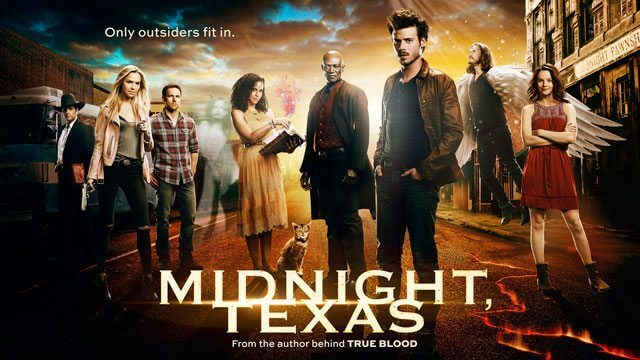 Midnight, Texas premiered as a summer show on NBC in 2017 with a 10 episode run and poor to mediocre ratings. Somehow, they were given a second season and moved to the fall- probably because of supernatural interference. Or an enthusiastic global and digital response to the show. Charlaine Harris has connections, y’all, she can make these things happen.

Ms Harris is the author of the wildly popular Southern Vampire Mystery series, otherwise known as the Sookie Stackhouse Mysteries/True Blood TV series. Midnight, Texas is currently a three novel series that takes place in the same universe as the Sookie Stackhouse novels. There are a few crossover characters in the books, though I don’t remember seeing any in season 1 of the TV show. They don’t arrive in town until the second book, so keep your eyes open this season. Last season combined storylines from the first and third books. So far it looks like season 2 will cover the second book.

Just like Sookie’s town of Bon Temps, LA,  the small southwestern town of Midnight, TX attracts outsiders, loners and misfits, especially those who are a little more than human. Midnight is sparsely populated, with barely enough permanent residents to even be called a town. It sits at a dusty crossroads with magical properties. The people who are drawn to settle there form a close-knit, protective community. They are slow to trust outsiders and don’t share secrets easily, but they are a force to be reckoned with when one of their own is threatened.

Season 1 begins when Manfred Bernardo, a psychic with true abilities, which he sometimes needs to fake for customers, drives his ancient RV bus into town on the advice of the ghost of his grandmother, Xylda. Manfred was mostly raised by Xylda and they’re still close. They’ve been able to remain close because Manfred sees dead people. Everywhere. Sometimes they possess his body, but only if he lets them. Manfred is on the run from Hightower, to whom he and Xylda owe(d) a large sum of money.