Episode 5 of Reprisal is both a character study and a turning point. We learn who all of the main characters are, at their core, and where their true loyalties lie, before Katherine Harlow makes her return to Brawlers territory and sets her revenge in motion by sowing a little chaos. Her tiny battle has the effect she expects and by the end of the episode, Bash has sowed much more chaos and likely incited a war.

We begin with a flashback to a young, wild-haired Joel as a Phoenix. Johnson is also a laughing, chatty Phoenix. The biggest surprise is that the third Phoenix, who already has her embroidered jacket, is Lyla’s mother, Rita. The 3 River Phoenixes pull up in front of an establishment which belongs to a rival gang, strut in and start a fight for no apparent reason, then come out less than 5 minutes later, with Joel and Johnson injured. Rita tries to stop the bleeding in Joel’s abdomen. He takes the opportunity to tell her he’s in love with her.

As Matty says, fighting breeds loyalty amongst the gang members. But why has Johnson been a Phoenix for so long, while Joel rose to the top of the heap? Johnson never complains, but he never says much of anything, period. The Brawlers give him a purpose and a life, if not exactly a home. It’s a life that largely keeps him and Joel separated, but lends consistency to the Phoenixes. Were they both in love with Rita, or was there some other major falling out between them? Or is Joel doing him a favor by leaving him a Phoenix rather than promoting him?

END_OF_DOCUMENT_TOKEN_TO_BE_REPLACED

Episode 4 opens on darkness and the sound of automatic weapons fire. Gradually, Burt Harlow’s face is revealed, lit by flickering, orange flames. He sits on the back of a truck and watches a large fire in the distance, on the order of several buildings. There’s a man with a gun several feet away. Burt notices the flames are slowing down and goes to the man with the gun, who is wearing a 3 River Phoenixes jacket and surrounded by a dozen bodies.

The camera pulls out to reveal that they are at the old racetrack and this is the night Katherine Harlow was left for dead. The man with the gun is Joel Kelly. He was the third man on the scene that night, along with Burt and Bash, and the man who drove the truck, but he was a Phoenix, not yet a full Brawler.

Burt goes to Joel and jostles him out of the trance he seems to be in. Now Burt begins to create the legend we heard Matty and Johnson tell Ethan in episode 3.

END_OF_DOCUMENT_TOKEN_TO_BE_REPLACED

In episode 3 we learn more about The Emboldened Conflict, Johnson’s name for the huge gang war that started after his massive argument with Katherine and the unforgivable betrayal that followed it. As far as the Brawlers know, Katherine simply took off one day, out of the blue, after betraying Burt, the brother who gave her everything. Katherine supposedly started the war as part of her betrayal, then Burt used it to unite the gangs.

Viewers also get a closer look at the day to day operations of the Brawlers and follow Doris on her search for the perfect crew. The perfect crew is a bit reluctant to sign on with her, so extended negotiations are in order.

Cousins Cordell and Earl, aka The Monster Ring, aka the guys who robbed the bowling alley in episode 2, sit in a truck outside of said bowling alley gossiping about sex and family and other universal subjects of gossip. Before long, an alarm sounds on Earl’s watch and they put on their masks. It’s time to rob Mr Bolo’s gaming room.

END_OF_DOCUMENT_TOKEN_TO_BE_REPLACED

The title of episode 2, A Flintlock & A Hound, refers to an old-style gun fired by striking a spark from a flint and a traditional type of hunting dog. In other words, the hunt is on, and the hunters are armed and ready. Doris is searching for the best crew to act as her backup when she confronts her enemies in the Banished Brawlers. Big Graham is framed by Molly and Doris and thus on the hunt for revenge. Individually and as groups, the Happiness Ghouls and the Banished Brawlers are hunting for a lot of things, most of them conflicting. Joel is definitely trying to maintain the status quo, but he’s not getting any help. The hunt for peace is never an easy one.

The episode begins with a major piece of Ethan’s origin story. Late one night in Detroit, several weeks ago, Ethan prepares to leave work at Doris’ restaurant. As he says good night to her at the bar on the way out, they’re both mocked by the last customer, an obnoxious redneck. The bartender informs the redneck that it’s closing time. The customer continues to argue and insult the staff before he stumbles outside, shoving Ethan as he leaves.

END_OF_DOCUMENT_TOKEN_TO_BE_REPLACED 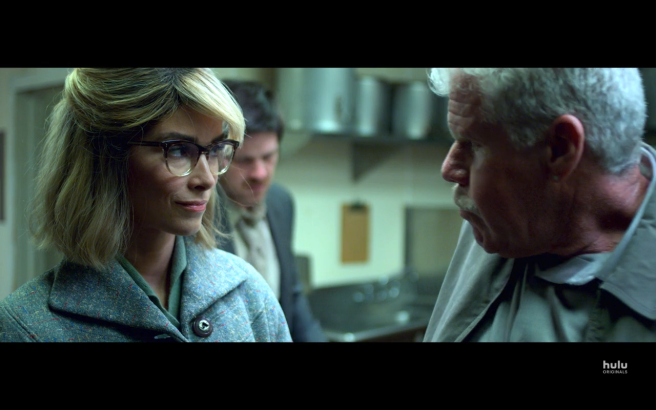 My review of Reprisal season 1 is HERE.

In episode 1 of Reprisal, we’re introduced to Katherine Harlow, aka Doris Quinn, who begins the story as a scorned part of the Banished Brawlers gang, but soon reinvents herself into Chef D, a respectable Detroit caterer. Unfortunately, Chef D finds that the men of the Detroit restaurant world aren’t much different from the men of her hometown gangster world, which forces her to make some decisions that will affect more than just herself. As William Faulkner said in his novel Requiem for a Nun, “The past is never dead. It’s not even past.”

Reprisal takes place in a neo-retro noir alternative world that could be the recent past, but could also be a future which has regressed technologically. It could be 100 years into our future, in which we’ve dialed back the level of materialism in order to save the planet or because of the way wealth has been redistributed. In the retrofuture world of Reprisal, Original Star Trek’s communicators have become modern flip phones, which are in use alongside old style land lines. The music spans many decades, from rockabilly and blues to punk.

Much of the series’ look refers back to the post-war era of the late 1940s-60s, especially as viewed through the lens of film.The creators have drawn from films such as Rebel Without a Cause, Rocky Horror Picture Show, Dirty Dancing, Blade Runner and American Graffiti. They’ve combined the neon of the 50s and the neon of neo noir/cyberpunk into their own disaffected, Gothic Noir style.

END_OF_DOCUMENT_TOKEN_TO_BE_REPLACED

This is a review of the entire season. Recaps of individual episodes are posted HERE as I complete them.

Hulu’s new retro noir series Reprisal is a unique show filled with unique characters. As such, it deserves a spot in their pantheon of shows such as The Handmaid’s Tale and Runaways which highlight complicated characters in fictional worlds that just keep improving the more involved the viewer gets. Altered Carbon is on Netflix, not Hulu, but it’s another show with a similar viewing experience, where it takes several episodes for the characters and the world to click into place and the plot to really take off. Then the viewing experience just gets better and better, as we’re plunged into an immersive world, where everyone has an agenda and anything can happen.

Reprisal takes place in an alternate universe that’s not set in a particular time period, but isn’t the future. It’s set in a neon swingers’ punk gangster scene that combines the look of the late 1940s- early 60s Rat Pack with a few more modern conveniences like 2000s flip phones and 70s muscle cars. It’s gorgeous and lives by its own rules, as this show does in every way.