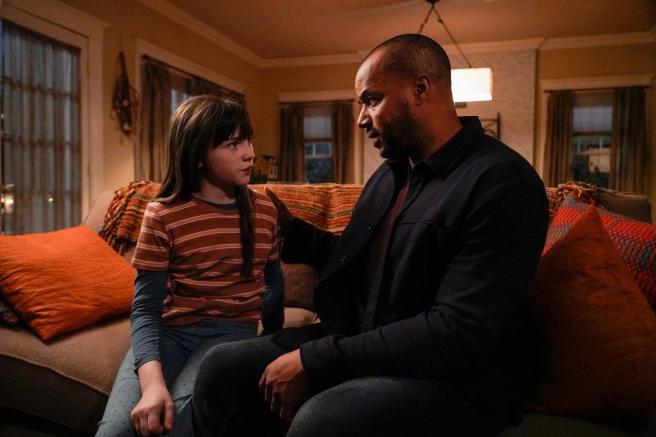 Episode 12 is part 1 of Emergence’s two part season (series?) finale, so it’s all about building the characters up for their big finish. Jo and Brooks go even more rogue than usual. Piper looks for an ally to help her save Benny. Helen wants what Piper has and will motivate Emily however she has to in order to get it. Chris monitors Benny in jail and does excellent police work.

I question how Brooks made it into the FBI and whether he’s secretly given Jo a lobotomy. Emily is a delight, as always. Someone give Maria Dizzia her own show.

Helen and Emily sit down for a meal and negotiations. An AI named Justin acts as their server, providing Emily with a huge, sharp knife that’s completely unnecessary for the meal. Helen prattles on about how she and Emily are both innovators, Mothers of the Evolution, who should work together and share resources rather than fight each other. Helen just wants Emily to give her Piper’s abilities, then she’ll share her considerable wealth with Emily and set her free.

END_OF_DOCUMENT_TOKEN_TO_BE_REPLACED

This week, Jo and Brooks return to Southold to continue their investigation, with the help of Abby and Emily. Chris and Alex get help from one of Alex’s engineering friends, who makes Alex an offer he may not be able to refuse. Piper spars with Helen and plays on Benny’s emotions as she attempts to get back to her family.

Guys, I think Helen is building Chronicoms to take part in Agents of SHIELD’s season 7 Time War for Planet Earth or whatever they’re calling it.

Watch Agent Carter season 2, Cloak and Dagger seasons 1&2, and Agents of SHIELD seasons 4-6, then tell me I’m crazy. It wouldn’t hurt to throw in season 3 of Runaways. Emergence could be a 13 episode long crossover prequel to AoS S7. But also a stand alone show in its own right.

Helen visits an AI who’s just sent his family off on a trip. She questions his commitment to their mission and he assures her that it’s as strong as ever, no matter what someone might offer him to turn traitor. She thanks him for his dedication, then kills him the same way she killed Alan Wilkis, by driving a rod up through his chin into his forehead, while they are standing outside, in his front yard, in broad daylight, where any of his neighbors could see.

END_OF_DOCUMENT_TOKEN_TO_BE_REPLACED

In a subdued episode, Jo and Agent Brooks search for Piper after her kidnapping by Benny and Helen. Mia and Ed find a way to send a covert message to Piper. Chris becomes acting police chief and teams up with Alex to investigate a suspicious boat moored in the harbor.

Jo and Brooks search Benny’s apartment a few hours after his kidnapping of Piper at the end of episode 9, but they’re long gone. Jo finds one of Piper’s sweaters stuffed under a couch cushion, confirming Benny’s involvement. Brooks tells her that Benny closed his bank accounts and gave his landlord notice. The FBI can’t find any family, living or dead. Benny’s background check appears normal going back 15 years, then it stops, as if he didn’t exist up until that point.

Probably because he didn’t.

Jo is stunned at the lengths Benny went to with his plan to fool her and gain Piper’s trust. Brooks assures her that they’ll find Piper soon, but 4 weeks later, they don’t have any new leads. Jo is following desperate hunches, like calling reporter Frank Fontana, a character from the CBS show Murphy Brown.