(My quick review of Castle Rock episode 10: Romans and Season 1 is HERE.)

That was an  disappointing season finale.

Later in this post I’ll give my favorite explanation of events, which tries to incorporate everything that happened and didn’t happen, because I can never resist a little pseudo-fan fiction writing of my own. I could tell you at least half a dozen others that I’ve made up since the episode was released. Every viewer has their own versions, just like we all had theories through out the season. It’s part of the fun of a mystery.

But I didn’t watch this show as a choose your own adventure/write your own ending show. I resent writers who try to pass off lazy writing and an unfinished story as an artistic choice. And make no mistake, that’s what creators Sam Shaw and Dustin Thomason have done. They thought it would be cool to leave the ending up to the viewer, and didn’t even decide on an ending between themselves.

This show was set up as a mystery, and the payoff at the end of a mystery is discovering answers to the bulk of the questions the series has posed. That way, viewers who are matching wits with the characters and writers have closure and satisfaction. This would have been an acceptable, but still disappointing, season finale for the first season of a 3-5 season mystery series that was going to explore a complex science fiction/supernatural mystery, like Orphan Black or 12 Monkeys.

Since season 1 was advertised as a self-contained story, I call BS. They can leave questions about the nature of their universe open, but this season’s mysteries needed to be solved. They could have left us with an amazingly ambiguous but thought-provoking ending, like the best anthology series often do. But this wasn’t thought provoking. It was just flat. We’re left going in the same circles we’ve been running in all season, not contemplating some deeper philosophical truth.

For the showrunners, this isn’t a show that’s about something. This is a show that wants to stump the viewer with unsolvable, unpredictable mysteries and dazzle them with cool ideas.  I think of it as the Legion syndrome. You could just as easily call it the Lost syndrome. The creators were so busy showing off how talented they are and what huge Stephen King fans they are, that they forgot to tell a coherent, compelling season long story with a consistent through line, an earned conclusion for each character and a satisfying ending. You can’t solve the mystery because the clues purposely don’t add up.

END_OF_DOCUMENT_TOKEN_TO_BE_REPLACED

Episode 8 of Castle Rock season 1, Past Perfect, is the beginning of the third and final act of the season, and it asks a very important question: Is it better to bury the memories of traumatic events, or to dwell on them? The show has a firm opinion on the matter, in the form of Jackie Torrance, taxi driver, real estate assistant, local history buff, and ax aficionado.

While Henry has buried his memories, and new Castle Rock resident Gordon has become obsessive and angry about his, Jackie uses history and her past experiences to inform her decisions. The memories aren’t dangerous if you’ve made your peace with them, as Jackie has. We’ve seen this throughout the season with other minor characters as well.

Kid isn’t turning anyone evil, he’s bringing out whatever demons were already there. The characters are doomed when they become emotionally involved with a situation and lose perspective, or don’t pay enough attention to a situation until it’s too late. They haven’t learned from past experiences. As long as they maintain their balance and sense of self, they can withstand the evil in the town, wherever it comes from.

Except for Henry, who walks around half awake, with no sense of self, ends up a damsel in distress on a regular basis, and has an entourage of heroes who save him: Molly, Kid, Ruth, Alan, now Jackie. You have to wonder why they all want to protect him so badly.

END_OF_DOCUMENT_TOKEN_TO_BE_REPLACED 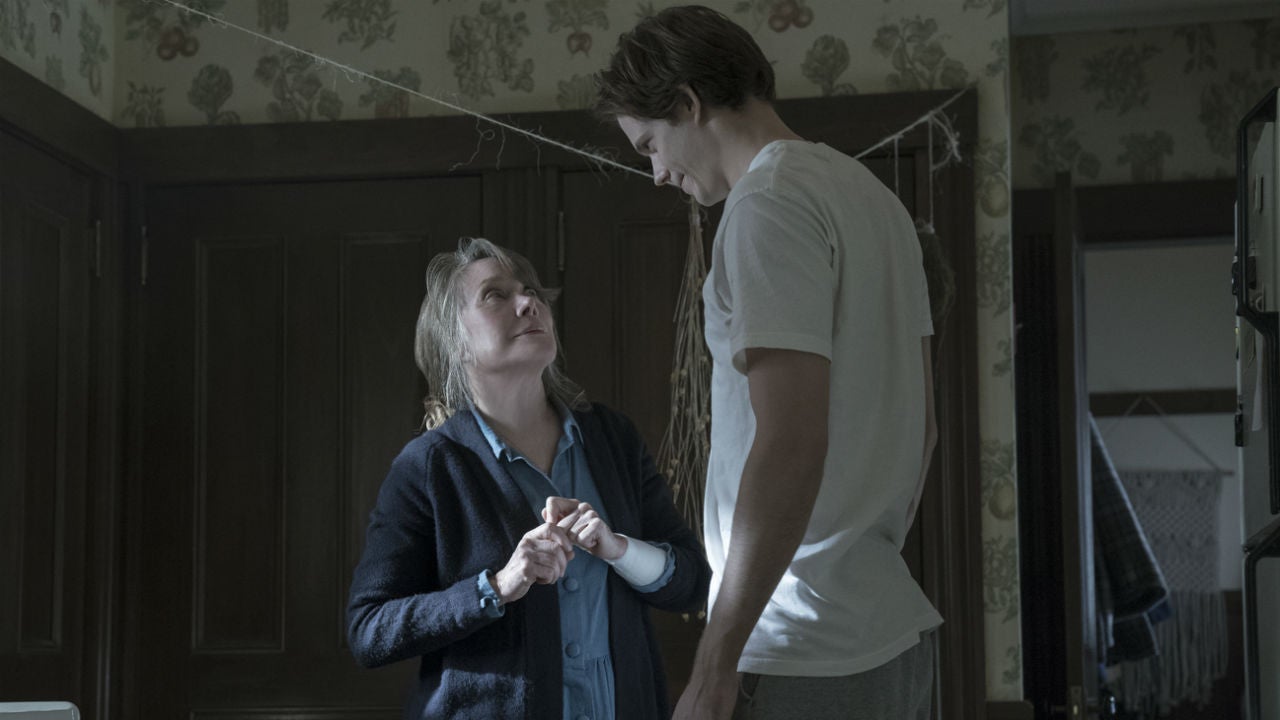 This is Sissy Spacek’s episode, and not only is it brilliant, but she’s brilliant in it. The queen is the most powerful piece on the chess board, only slightly less important than the king. The true king of Castle Rock is yet to be revealed, but there’s no doubt that Spacek’s Timewalker Queen Ruth is powerful and understands more of what’s going on around her than anyone but her grandson Wendell will give her credit for.

Ruth goes up against the Kid in this episode, and is canny enough to keep everyone else away from the house and out of danger. Except for the one person who has spent his life trying to smother her with protection and who refuses to see the truth. Even Ruth’s power can’t protect Alan from the Kid’s revenge. But when you think about how much contact Ruth had with Kid, and how little damage was done as compared to Zalewski, the prison population as a whole, and now the psychiatric hospital, Ruth comes out looking pretty good. It was Alan who was easily manipulated. It took Kid 5 minutes to get Alan where he wanted him, and 2 days of constant stalking and gaslighting with Ruth.

END_OF_DOCUMENT_TOKEN_TO_BE_REPLACED

In episode 5, Harvest, the Kid is released from Shawshank Prison, thanks to Dennis Zalewski’s shooting spree, which has left the prison exposed and liable for much more than just a prisoner held without due process. Kid’s suddenly a free man, living on the outside, as much as living in Castle Rock can be called free or living in the normal world.

Kid doesn’t know how to handle it at first, but he gradually reacclimates over the course of the episode, and even seems like he gets his memories back. Molly spends some time with Kid and doesn’t like what she finds in his head. Henry attempts to remain oblivious to anything unusual happening. He’s got a plane to catch, and nothing is going to stop him.

END_OF_DOCUMENT_TOKEN_TO_BE_REPLACED

This is a disturbing episode that leaves the audience with a lot to think about. We lose some characters, gain some characters, and begin to learn who some of the others really are. We also learn some things we wish we didn’t know.

It’s hard to say which box is meant to be the titular box in this episode full of sinister and confining boxes. There’s the box containing Henry’s police file, which Pangborn tried to conveniently lose many years before as part of a deliberate cover up. There’s Matthew Deaver’s coffin, which makes a grand entrance through town on the back of a truck, straight past his widow, who definitely didn’t want to see him back in town.

There’s the many boxes that make up the prison, from the cells to the surveillance room to the camera monitors to the watchtowers. There’s the boxes that Zalewski and the other guards will be buried in. And the wooden box that Josef Desjardins has in his backyard with a cereal bowl and spoon locked inside that could have held Henry, Kid, or both at some point.

Then there are all of the mental and metaphorical boxes that the characters put themselves and each other in. Zalewski asked how one town can look the other way so much. The answer is partially that they all live in boxes with high walls and no windows. They avoid climbing up high enough to look over the top to check on anyone else.

END_OF_DOCUMENT_TOKEN_TO_BE_REPLACED

In episode 2, Henry investigates Lacy’s suicide, hoping it will lead him to his missing client. He stops by the church again and connects with Jackie Torrance, a local history buff who helps with the local church program to minister to the prisoners. Henry also connects with Zalewski, who helps him get his first look at the Kid. The Kid is having adventures in the regular prison population, as the Warden agrees to put him into solitary, doubled up with a roommate. Pangborn is playing his own complicated game using inside information.

More of what the town put Henry through when he was a child begins to come clear. It’s obvious that he was convicted in the townspeople’s minds as soon as his father’s injured body was found, while Henry himself was still missing. Being black and adopted was enough for the town to use their imaginations to come up with a story that they found believable. The truth was irrelevant, and still is.

END_OF_DOCUMENT_TOKEN_TO_BE_REPLACED

I was undecided about whether to recap Castle Rock because I was afraid it might be too scary for me, but we had a request, so here we are. Be prepared to hold my hand, dear readers!

The show takes place in the Stephen King universe, using some of the locations and characters from his books and some actors from Stephen King’s other filmed properties, but it tells an original story. Castle Rock itself is a small rural town in northern Maine, home to several King books, including Cujo, The Dead Zone and The Dark Half. Shawshank State Penitentiary, from the novella Rita Hayworth and Shawshank Redemption, lies outside of town and is one of the town’s main employers.

Hulu released the first 3 episodes this week, but I’ve only watched the first, so no spoilers for the other 2 here. I’m also not going to spend much time looking for Stephen King Easter Eggs or referencing the stories that are the foundation of this one. I’ve read some of Stephen King’s works and seen some of the films/TV series, but I’m not the kind of fanatic who’s tried to keep up with everything he’s ever done.

King also has a tendency to either forget to include female characters or be misogynist toward the ones that are there, so by about the 1990’s I’d had enough of that and haven’t read/seen much that’s new since then. Castle Rock should be able to stand on its own in the modern world if its going to survive, not depend on nostalgia for old works, and it shouldn’t stay stuck in King’s past mistakes.