Everything comes full circle in the season 1 finale of In the Flesh. Episode 1 ends with Bill Macy pointing his gun at Maggie Burton, a harmless old woman and PDS sufferer, and pulling the trigger. Appeals to his humanity don’t sway him, but he does have Maggie take out her contacts so that he can see that she’s partially deceased while he shoots her.

Episode 2 ends with Bill’s son Rick Macy pointing a gun at 2 feral PDS sufferers, and then at Kieren, when Kieren steps in front of the gun to stop the unjust killing. Rick refuses to admit that he’s a PDS sufferer, but he does respond to appeals to his humanity. He gives up when Kieren takes out one contact to remind Rick that the feral zombies are the same as Kieren.

Episode 3 ends with a third person looking down the barrel of a gun, but this one knows he’s on the side of justice, and doesn’t hesitate to fire.

There are several moments of truth in episode 3. Bill decides that Rick must redeem himself by killing Kieren, who he says is a disgusting, evil rotter. Rick decides to prove to his father that PDS sufferers aren’t evil by forcing Bill to face that his son is one. Bill draws the opposite conclusion from this.

END_OF_DOCUMENT_TOKEN_TO_BE_REPLACED 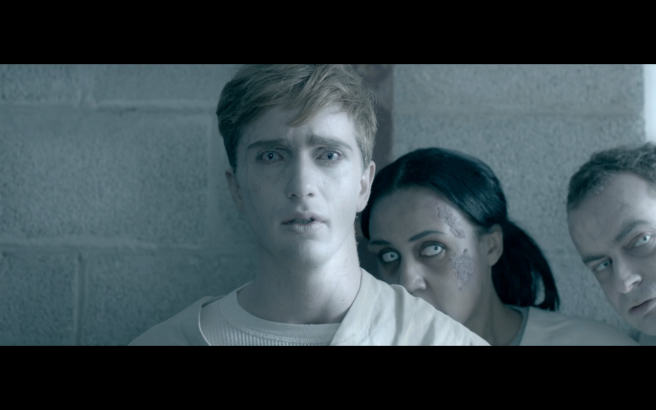 Let’s take a break from Nazis, and have some fun with sentient zombies during these last few days before Halloween! In the Flesh is a BBC/BBCAmerica show from 2013-14 that was cancelled after 2 short seasons, leaving it with a grand total of 9 episodes. Each season tells a complete story, so no worries about being left on a cliffhanger, though threads were left open for season 3 to continue the story. (Bring it back, please!!) The show was created and written by Dominic Mitchell, who’s gone on to write and produce for Westworld.

In the Flesh is currently streaming on Hulu and included with Amazon Prime, or if you’re in the UK, on the BBC website. Even if you’re not in the UK, the other videos on the site aren’t geolocked, and there’s a lot of great stuff there.

This  is my favorite zombie show ever, rivalled only by season 1 of The Walking Dead. It was recently featured in IGN.com’s article The 15 Best Horror TV Shows of the Last 10 Years along with my other relatively obscure personal favorites Crazyhead and Dark, both on Netflix. (I will recap season 1 of Dark, hopefully before the end of the year. Or before season 2 is released. Or the timeline changes. I have a draft started.)

In this universe, the recently deceased all rose on one specific night in 2009, for unknown reasons, then rampaged the world, killing humans and eating their brains. Eventually scientists figured out that they were eating brains because they were missing a specific brain chemical. Once a medication was created to replace what was lacking, the zombies’ mental state returned to normal. Their physical state remains more zombie-like, though it’s improved from the feral state.

But in the intervening years, many people died, among both zombies and the living. Volunteer militias were formed in small towns to cope with the zombies, since the military was spread too thin. These Human Volunteer Forces, or HVF, were the big heroes of the day, and some are having trouble returning to normal life.

The populace as a whole has difficulty accepting the Partially Deceased Syndrome sufferers, as the zombies are now known, back into their midst. The PDS sufferers grow resentful at being blamed for actions that were outside of their control. They are victims of a chronic disease, not criminals. Some begin to feel that they should wear their PDS proudly, as a badge of honor.