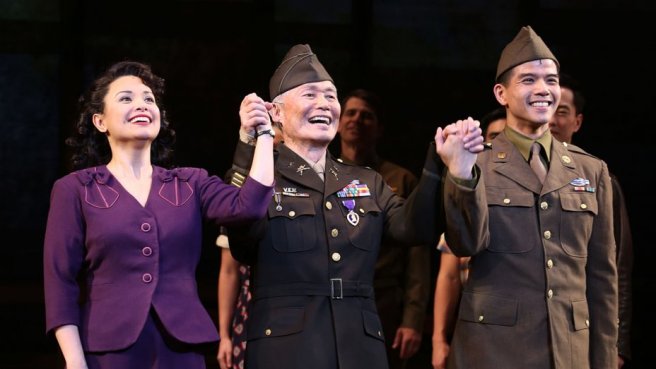 I went to the Fathom Events screening of George Takei’s Allegiance at my local theater this evening. This actually wasn’t the first time I’d seen Allegiance, but I hadn’t seen the show since it was in previews. It’s been tightened up and improved a lot since then. I’m so grateful to Fathom and the Allegiance creators for giving us all a chance to see the Broadway version of this show with the original Broadway cast, and with the best seats in the house.

The cast were all amazing. Lea Salonga was no surprise, of course. George Takei was both moving and funny in his Broadway debut. Katie Rose Clarke  was charming as Nurse Hannah. Christopheren Nomura was especially powerful as the demanding, unforgiving father in the Kimura family, Tatsuo. Michael K Lee and Greg Watanabe also gave strong performances.

END_OF_DOCUMENT_TOKEN_TO_BE_REPLACED

Their loyalty was questioned, their freedom taken away but their spirit could never be broken.

Beloved “Star Trek” actor, George Takei, invites you to embark on an emotional journey into a chapter of America’s history that is more relevant today than ever. George was only 5 years old when his family was amongst the nearly 120,000 people relocated from the West Coast after the events of Pearl Harbor. This past year, at the age of 78, George made his Broadway debut alongside Tony Award®-winner, Lea Salonga (Miss Saigon) in a new American musical inspired by his own childhood experience. Allegiance tells the poignant and uplifting multi-generational tale of one family’s love, loss, and heroism who – much like George’s – endured unfathomable circumstances during the Japanese American internment of World War II.

Prepare to be moved by this vivid and deeply-personal musical during this one-night cinema event tonight, Tuesday, December 13th at 7:30 pm.

“An important show with a PHENOMENAL CAST, it deserves to be seen.”
– Entertainment Weekly