Disclaimers: We can’t speculate much about the next Defenders season, since the continuation of this season’s storylines will be picked up in the individual series’ seasons that will be released long before we get season 2 of The Defenders. So my speculation is about where the story might go for individual characters or organizations, regardless of which show in the Netflix Marvel Universe they might be appearing on at the time. Also, there are a few previously published spoilers sprinkled throughout this post, such as casting news for the various shows. Spoilers are marked [Spoilers].

I enjoyed The Defenders and its focus on the characters. The interplay between the various Defenders was fun, interesting and deepened each character. The interactions between the Defenders and the members of the Hand and other side characters also gave us some entertaining moments, and challenged the characters. Gao and Hogarth, in particular, are played by incredible, talented women, are well-written, and generally provide a challenge to whoever is on screen with them. The addition of Sigourney Weaver as Alexandra was genius, and it’s sad, in a way, that she seems to be definitively dead, so we can’t see more of her. It was also entertaining to watch the supporting casts from each show come together and play with each other.

But the Defenders themselves are the main attraction, and they deserve the attention. Watching Danny and Luke develop from two alpha males who didn’t like each other and stood in their corners snarling, to a big and little brother camaraderie and respect was tons of fun. Seeing the two damaged, suspicious orphans, Jessica and Matt, slowly let down their guard enough to trust each other and discover their matching sarcastic senses of humor was also good fun.

[Spoiler: Danny will be visiting Luke, Claire, and Misty on Luke Cage, season 2, so the bromance will continue. Maybe we’ll get a chance to see Danny supervise Misty’s fitting and rehab with her new cybernetic arm.)

END_OF_DOCUMENT_TOKEN_TO_BE_REPLACED

And They All Fall Down

The Defenders come together as a united team in this episode, for an epic fight to save NYC from destruction by the Hand. Previous to that, Luke, Matt, and Jessica seem to sincerely want to save Danny because they care about him for himself, not just because the Hand having the Fist is a very bad idea.

But, most importantly, this is a Winter Soldier parallel, and that building has to come down. We can’t let the Hand succeed with its ultimate evil plan to live forever and take over the world.

First, we need to convince Luke that the architect was right, and we should use his C4 and plans to collapse the building. Sweet Sister, Luke’s not okay with violence unless he’s instigating it! His trusted women, Claire and Jessica, make good points in the argument; enough so that he reluctantly gives in. Jessica, in particular, wants the Hand to be stopped permanently. She still has the architect’s brains all over her apartment and once is enough with a rude enemy like that.

END_OF_DOCUMENT_TOKEN_TO_BE_REPLACED 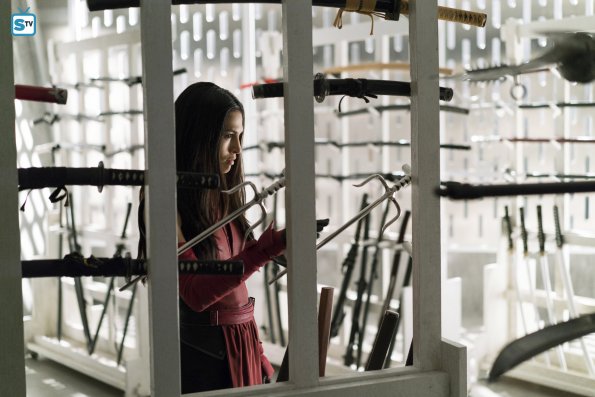 This episode continues the color desaturation begun in episode 5, as the Defenders begin to question each others’ loyalty again. Their animosity is sparked by the chaotic, homicidal influence of Stick, who has to be the worst army leader in the history of armies.

If there is a theme to this episode, it’s best summed up by the famous Vietnam War quote (which is often misstated), “It became necessary to destroy the town to save it.” Everyone runs around destroying or threatening to destroy whatever they’re sworn to protect, all in the name of some perceived greater good.

Alexandra sits alone and listens to classical music on a gramophone. The needle begins skipping, repeating the same few seconds over and over until Alexandra lifts the needle up to stop the play. The record and the gramophone are old, damaged, stuck, and nearly obsolete, just like Alexandra.

END_OF_DOCUMENT_TOKEN_TO_BE_REPLACED 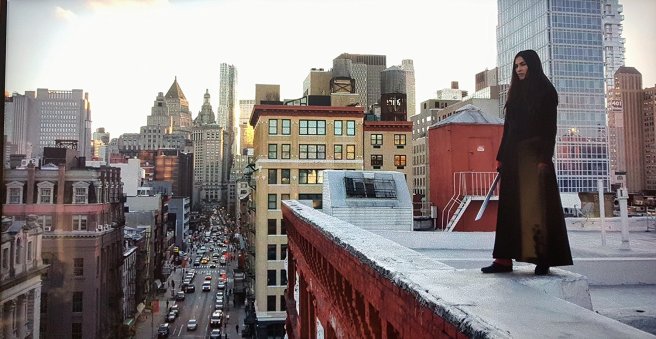 This episode is all about the Defenders vs the Hand, as the Defenders begin to define themselves as a team, while the Hand lets infighting and old grudges continue to drive them apart. The visual style of the show changes to reflect this.

In the beginning of the episode, the Defenders signature colors of green, yellow, blue and red fuse into soft mixed colors, like peach, chartreuse, gold and lavender. They gradually give way to industrial grays made of metal and concrete, and the cold whites associated with Alexandra, as the Hand becomes more prominent in the episode.

Elektra also shifts through being surrounded by Alexandra’s white and wearing Matt’s red, to wearing her own color, black, with just a hint of Matt’s red, and placing herself in Matt’s apartment. Interestingly, Matt’s apartment has art and other prominent accents in Jessica’s blue. A hint for the long-term future?

END_OF_DOCUMENT_TOKEN_TO_BE_REPLACED

This is my favorite episode of the season. Most of the episode takes place in the Royal Dragon Chinese restaurant, which is filled with neon light, like above, that’s used beautifully. The four defenders, and their signature colors, are brought together to hash out whether they’ll work together or not, and to compare notes to figure out what the heck is going on.

The restaurant itself adds noir elements like a certain grittiness, deep shadows and Venetian blinds. The party is eventually joined by the darker, more ambiguous members of the cast, Stick, Alexandra, and Elektra, to fill out the range of shadows and colors along with the range of possibilities the characters can choose to go.

The camera pans down the dragon sign and into the restaurant in a single shot, showing a quiet, empty place with an owner who’s closing up for the night. Suddenly, the camera movements become fast, jerky, and unpredictable, as the Defenders burst in through the front door. They take over the restaurant as their temporary hideout from the Hand.

As the camera jumps and swings between characters, we get to know each Defender, their relationships with each other, and they get to know each other a bit more. Danny is impressed with Jessica’s strength as she tips a bureau up on end in front of the door. Jessica is surprised that Danny knows Chinese. Luke can’t figure out how someone can hear neon lights (I have that superpower too!). Matt is mostly just paranoid and authoritative. He’s the one who secures all of the entrances.

END_OF_DOCUMENT_TOKEN_TO_BE_REPLACED 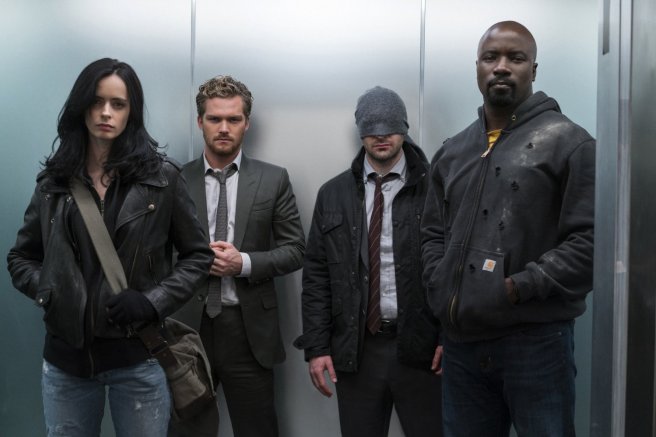 In this episode, all 4 Defenders’ finally come together and cross streams… Um, that didn’t come out how I meant it. All 4 Defenders are finally in the same place, at the same time, blending their signature colors, which should make brown, but mostly just makes Elektra turn up again.

But that’s not until the end of the episode. Let’s start at the beginning, with the sublimely cultured Alexandra. In a scene from months ago, She’s dining alone, as always, in a little out of the way Turkish restaurant. Alexandra tries the food and asks the proprietor to tell his wife that she makes the dish even better than they did in Constantinople. He informs her that she must mean Istanbul. Constantinople is the ancient name. Alexandra smiles her enigmatic smile and says, “Of course.”

Just how old are the members of the Hand?

END_OF_DOCUMENT_TOKEN_TO_BE_REPLACED

Sorry for another long hiatus between episodes. I did use some of my time wisely, and watched both seasons of Daredevil and rewatched Iron Fist. So, as of this episode, I’ve only seen the pilot of Luke Cage, but have seen all of the other 3 Defenders’ shows.

Let’s see what those crazy kids are up to now.

Hell’s Kitchen is reeling from the earthquake at the end of episode 1. Matt is perched on top of a building, listening for trouble. He hears a robbery go wrong when the store owner pulls out a gun. Matt leaps into action to stop anyone from being gravely injured. He punches out the store owner to save the young looters, saying, “They’re just kids!” “Who are you?” the owner asks when Matt’s finished with him. Matt looks like he’s not sure himself, and doesn’t answer.

END_OF_DOCUMENT_TOKEN_TO_BE_REPLACED

How funny is it that I had to come back to the MCU to find fantastic female characters who are being treated well by their show? Given the MCU’s dismal reputation and track record with female characters, pretty d*mn funny, I can tell you that. The Defenders themselves may be 75% male, but they are surrounded by women in every shape, size, age and color*, who go about their business like the normal human beings that they are. Well, normal for a superhero comic book show.

Madame Gao, please never leave me. Please get a spin-off buddy comedy with Alexandra. With Black Sky as the disapproving young apprentice. I beg of you, Netflix, make it happen. You can market it as the next Grace and Frankie. But this one will be about how they never get old, and never try to do the right thing, and have never cared about ex-husbands or boyfriends.