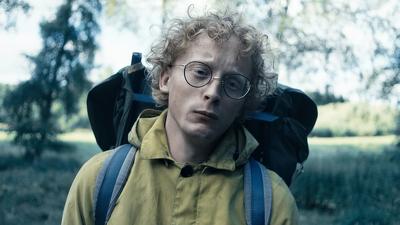 Episode 4 is Jean’s episode, as we learn about his life during the early part of the plague. Like all of the other characters the show has explored so far, he has a dark secret that allowed him to survive at the expense of others. The events of the past resonate with current events and cause him to take drastic measures, which have a huge impact on himself and the group.

Each episode title is a lesson Simone and Rasmus need to learn in order to survive in the wild post apocalypse world. So far, the lessons have been simple: Stay inside, Stay together, Avoid the city. With this episode, the titles start to address interactions with strangers, which is a more complicated situation. It’s probably not possible to “Trust no one” and survive, but extreme caution is a necessity Simone and Rasmus haven’t learned yet. This episode provides ample evidence of why it’s best to be careful.

Lea and Jean watch the bridge, which is being regularly patrolled by the Strangers, from a high vantage point. They get frustrated that they can’t see any way to cross, and Jean stands up to get a better look. Lea pulls him down, telling him that was a stupid thing to do. Then she makes sure that he knows that he isn’t stupid, just the thing he did. She thinks he’s nice. He tells her that he isn’t sure she’s right about him. After all, she doesn’t know what he’s done. She says the past doesn’t matter. What matters is who you are now, and she knows him. He says she knows nothing.