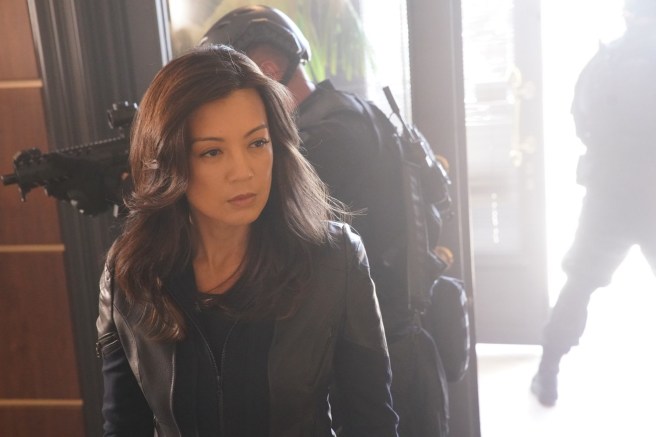 In season 6, episode 2 of Agents of SHIELD, Melinda May returns to peak fighting form after an injury sidelined her for most of season 5. She single handedly takes on Sarge’s team, including the Jaco the Giant and Snowflake the dirty street fighter. She doesn’t win the fight, but she does gather important intel, free the hostage and jog Sarge’s memory of the word “Coulson”, so it’s a win for the mission.

The other main storyline this episode is Fitz and Enoch’s big space adventure. They’ve signed on to work a long haul run with a crew of xenophobic Sivians in order to get to Naro-Adzia, the planet where cryo pods are made (Jenna was right in her prediction). Fitz disguised his eye color and Enoch taught him the language so that he could blend in with the Sivians. But Enoch forgot to share some important cultural points with Fitz, which lead to them being outed as Terrans. Fitz has to think fast in order to save himself and Enoch without allowing the rest of the crew to be killed instead.

This episode allows viewers to get to know the alien culture that Fitz is involved with better, and the one that Sarge is part of. The writers also take time to further explore Marcus Benson and Agent Keller’s characters. We find out a little more about Sarge and his crew as individuals, including the fact that some teammates are disposable, a very un-Coulson-like attitude.