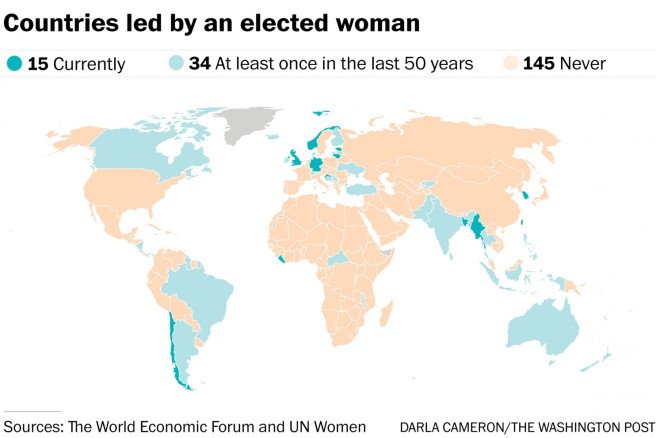 Better Than Nothing Should Not Be Enough

This map is from an article on the Washington Post website titled Here are the dozens of democracies that have elected a female leader. The article is ostensibly an attempt to make women feel better about the fact that Hillary Clinton just barely missed shattering the glass ceiling separating her, and all women, from the White House by looking to other countries’ successful elections. I’m not quite sure how that article, or that map, are supposed to make me feel like the rest of the world is any more than marginally more advanced than we are.

But why hasn’t the United States had a female president? There may be as many theories as there are reasons, one of which may be that it is harder to achieve something without precedent. This map just asks that American girls and women look beyond their country’s borders, for the time being.

But this is meaningless. The first woman elected to lead her country in every instance has done something without precedence. It is not an explanation as to why it is harder in a country that likes to think of itself as one of the most advanced in the world.

Many of the elected female leaders came from political dynasties and took over from a father or husband, including the first woman to be elected to lead her country in modern times, Sirimavo Bandaranaike, who became prime minister of Ceylon (now Sri Lanka) in 1960. 56 years later, Hillary Clinton’s powerful connections, in the form of her husband (a former president) and the close friendship of the current president, weren’t enough to get her the votes she needed from the right people in the right places.*

Also from the article:

Women have led countries that are majority Christian, Muslim, Hindu, Buddhist and Jewish, on each of the six continents with countries on them. Women are slowly gaining better representation in legislatures, too. As of this summer, 22.8 percent were women, about twice as many as 20 years ago.

The US doesn’t seem to have many excuses as to why none of our talented, intelligent women have been able to make it to the top politically, other than the obvious. I look at these facts, and I can’t help but think the glass is much less than half empty, not only in the US, but world-wide. Only about 25% of the world’s countries have ever had elected female leaders.

Take a good look at the qualifying words and phrases used in the article: slowly, a, at least once in the last 50 years, for the time being, harder to achieve, dozens,numbers like 13, 15, 2, 34. All words to temper our enthusiasm, even in an article that presents itself as giving women hope.We get the mixed message that women have a chance to change things, but shouldn’t expect much. Look at how few areas of the map are shaded to indicate they have a female leader right now. This is an article that is describing EVERY elected female leader they could find in modern times. All of them. EVER. And when they found that only about 25% of the countries in the world have ever had a female leader they decided to describe this as something hopeful, as progress we should be grateful for. Because, hey, as women, we’re lucky we’re allowed anything at all, and we should be grateful for the crumbs of slow progress we occasionally achieve. Imagine the numbers they’d have to use to describe male leaders. Thousands? Hundreds of thousands? How many men have been elected in 194 countries over the last 250 years alone, never mind if you consider all of history?

And the fact that only 15% have female leaders now, and that 22.8% of legislators are women, while we make up more than 50% of the population? Woohoo, once again, look, a few token women have been allowed into the club. Misogyny limits us in ways that are glaringly obvious and in ways that most of us don’t even notice because we’re so indoctrinated into them. In reality, without that misogyny holding us back, we could be equal members of our society right now.

It’s misogyny and media bias to say otherwise. Why isn’t this article decrying the unfair representation of women in their REPRESENTATIVE governments throughout the world? Why not say, “Well, women of America, you’re not alone in your lack of representation. Few countries in the world allow their women to be elected as leaders. None do so on a regular basis.”? Those would be much more accurate statements. That would also force The Washington Post to acknowledge its own institutionalized misogyny.