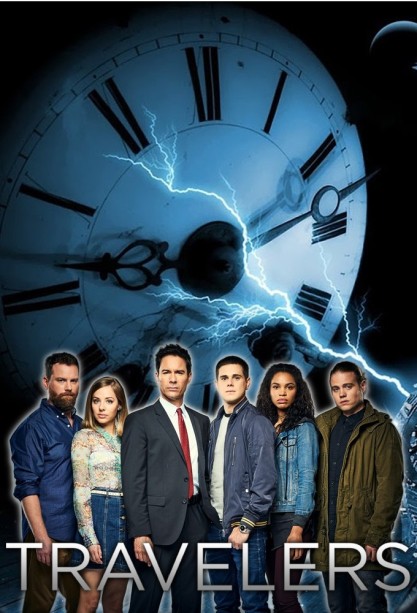 This episode opens seconds before the pilot ended, just as Mclaren is being taken over by a traveler. Marcy injects him below the left ear with a coms device. She’s already injected the rest of the team. McLaren is impressed that Trevor found the time to build coms as an after school project. Traveler Trevor is a hard worker, unlike original flavor Trevor. The police arrive in response to original McLaren’s call for backup. The lead officer is a traveler who hands off a package to Mclaren, and tells him to “Go save the world!” Carly lets the police know her police officer baby daddy is locked on the roof.

Meanwhile, the military is forcibly removing antimatter from a lab in the city. They’re taking it to an undisclosed location outside of town for undisclosed purposes. Their containment unit begins to fail, which means the antimatter will explode. An explosion this close to the city will destroy it. This is what happened in the travelers timeline. Their first mission is to seize and contain the antimatter, then hand it off safely to another team.

McLaren and Carly are on stake out duty, watching for the convoy with the antimatter. We learn that they are a couple, who are very much in love, but in this time McLaren has been married for 11 years and Carly has a baby. Both will have to keep playing those roles for the time being. Cue the relationship angst.

The team is able to acquire the antimatter without a hitch, and set off a smaller explosion as a cover. It was supposed to kill the driver of the truck carrying the antimatter, but unbeknownst to them, he crawls out and is left in a coma. Oops. The team is happy they saved 11,000 lives, but Philip noted that they lost the truck driver.

David is still trying to understand the change in Marcy. They talk about McLaren’s visit to the apartment, and she lets David believe that Marcy has been working with McLaren undercover all along. Marcy tells David she’ll eventually need his help. He goes to bed feeling better about the situation.

Carly gets home to find a note from Jeff the abusive police officer baby daddy saying he’s taken the baby, Jeffrey Jr., home with him, and that he and Carly need to talk. Ominous music plays, but by the end of the episode they still haven’t had a talk, and the baby is safely back with her.

Philip is living in the team’s secret hideout/abandoned garage/headquarters and going through heroin withdrawal. Original Philip’s death certificate said he died after using the first time, and the future people naively believed it. They must have eradicated heroin addiction in the future. Philip is in bad physical shape. He’s also in possession of the antimatter containment unit.

Marcy and Philip take the antimatter to an office building where they’re supposed to hand it off to a newly arrived team leader. Newly arrived, as in, arriving seconds before the hand off. Not sure why the travelers feel the need to cut these things so close, other than for the show’s dramatic purposes. This traveler was taking over a suicide, but the man had a backup plan that the travelers were unaware of. He succeeds in killing himself, so the traveler is unable to possess the body.

The travelers had no backup plan, so they’re stuck with antimatter that’s going to explode in a day, and left scrambling. The new traveler can’t access another body quickly enough to help. They’re on their own.  McLaren breaks protocol to speak to the police officer traveler who handed off the containment unit, but she brushes him off. It’s too dangerous to make unauthorized contact.

Despite their earlier conversation, David continues to mother hen Marcy. He gives her a cell phone and tries to convince her to go to the doctor for her seizure the day before. Marcy reveals that she’s a doctor herself, and understands her symptoms. She needs an MRI. By the end of the episode, she agrees to go see a doctor.

She and David are on the phone when Philip’s heroin withdrawal catches up to him. He’s working with Trevor to improve the containment unit, but his hand shakes and causes an electrical shock. Philip goes into cardiac arrest and the containment unit loses most of its power supply. Marcy brings Philip back, but the antimatter situation is now dire. David is forgotten on the phone. Marcy and Philip confess their secrets to each other. The future people thought Marcy was a librarian based on her Facebook page. That page was actually fiction, made up as part of Marcy’s therapy.

These future people really need to do better research. Didn’t anyone ever tell them to check multiple sources? Put things in their historical context? They haven’t figured out Dr. Gregory House’s simple truth: everybody lies. Especially on social media and about embarrassing causes of death.

Dr Delaney, who developed the antimatter, and Major Gleason, the officer in charge of moving it, have become suspicious of the smaller-than-expected explosion and begun investigating. The team decides the best place to keep the antimatter safe is to return it to Delaney’s lab, so they flood the facility as a distraction.

The team makes it into the facility pretending to be plumbers, but Delaney catches them in her lab. They reveal to her that they have the antimatter and are returning it, using McLaren’s FBI identity as a cover. Gleason arrives to create dramatic tension and throw his weight around. They get him out in the nick of time and safely get the antimatter back where it belongs. Carly is apparently trigger happy, and pleads with McLaren to let her shoot Gleason. Good to know.

Delaney knows the team isn’t telling her the whole truth. McLaren leaves her with his card. They’ll be in touch.

We meet McLaren’s wife, Kat. There are hints that their marriage wasn’t perfect. She’s not too surprised to find him sleeping on the couch, but is surprised when he’s home in time to spend the evening with her. We also find out that in the future everyone is vegan. McLaren is disgusted when Kat gives him cow’s milk in his coffee.

This was a fun little episode. It easily stood alone. We learned more about each of the characters, the way their operation is meant to work, and the future they come from. This show has some flaws, too, but it’s off to a good start.