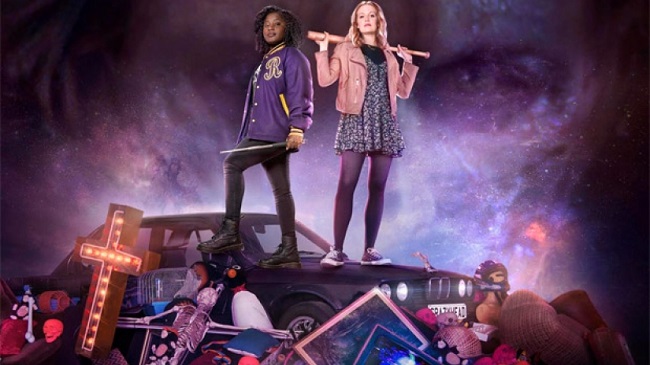 Crazyhead is a new comedy-horror series which premiered on the BBC in October and globally on Netflix in December. It’s Shaun of the Dead meets Buffy the Vampire Slayer, but with demons and demon hunters instead of zombies or vampires. Buffy and Faith get to be friends rather than rivals in this version, and they look like real women with the muscle mass required to win their fights, rather than anorexic stick insects who’d pass out before they’d finish their first roundhouse kick. (I love you, Buffy, but professional fighters need some bulk. But we won’t get into my issues with Joss Whedon here.)

We start at the end of the story, with demon hunter Amy’s best friend Suzanne in the trunk of a moving car. When the car stops, Amy and fellow demon hunter Raquel, wearing clown masks, take her from the car, lay her on the ground, and tie her up. Very serious and scary. Then the fun starts. Suzanne recognizes Amy, and they argue about the ownership of the jacket Amy’s wearing, demon possession, and their friendship. While Suzanne is laying on the wet pavement, in the dark, tied up. I found this completely realistic. Roommate boundaries are important! As are cute jackets.

Raquel asks if they’re gay, then moves the exorcism along. It turns out Suzanne has been possessed by a demon. Raquel reads the steps in the exorcism procedure from her cell phone. Step 1: Pee on the victim. Amy loses the argument over who gets the honor of peeing on her best friend. I’m not completely confident in Amy and Raquel’s training yet.

We flash back to 3 days earlier. Amy is at a psychiatrist’s office, where she’s discussing the side effects of discontinuing the medications she’s been taking to prevent hallucinations. Later, Amy goes to a club. Raquel is also there. Both are seeing a demon, but the two women don’t notice each other. Raquel leaves, and the demon follows her to the parking lot, but he can’t find her.

Soon after, Amy slips outside to have a cigarette and sees the demon. He realizes she can recognize his true form and attacks. Raquel jumps out and saves her, but Amy’s knocked unconscious. Suzanne takes her to the hospital, where she’s examined by Dr Weaver, another psychiatrist, who wants to continue seeing her. His motives don’t seem benign. Tony Curran is a good choice for this role. He always seems slightly sinister in every role, to me, no matter how good the character is supposed to be.

The next day, Amy returns to the club to try to figure out what really happened. Raquel is there waiting for her. She explains the basics of demons and demon hunting to Amy in a hilariously inarticulate way, then gives Amy her phone number and heads off to therapy. This doesn’t inspire confidence in Amy and she isn’t sure what to believe. She notices they’ve been followed to Raquel’s house by a demon who looks a bit like the Winter Soldier. I am totally okay with this, because a Bucky demon could never be evil, right?

Amy works at a bowling alley with her close friend Jake, who has feelings for her that she doesn’t reciprocate. When she gets to work, she flirts with him and his puppet (not a euphemism) for a few minutes.

Raquel has a gorgeous bedroom and a gorgeous brother. She’s melting down because she wasn’t as cool as she wanted to be when she talked to Amy. Her brother, Tyler, talks her down and makes her dinner.

When Amy is done with work, she calls Suzanne for a ride. The demon from the club shows up at the bowling alley while she’s waiting there alone. She calls out to whoever is making noise, and walks toward them, empty-handed. If it was me, I’d grab a bowling pin, or a ball, or something to use as a weapon, just in case, or at least walk away from the noise until Suzanne got there. If it was metamaiden, she’d come up with a kitchen knife, probably a butcher knife, somehow, and melt into the shadows. But Amy is not a frightened normal like us. No, she is a demon hunter and walks right in. She and the demon scuffle until Amy runs out of the building, past Suzanne’s car. The demon chases her, and ends up being hit and killed by the car. When the demon’s host body dies, it moves into Suzanne. Amy comes back to the car a moment later, but the demon pretends to be Suzanne, and Amy is fooled.

Once the Police and EMTs arrive, Amy whips off her shirt so that she can see the spot on her arm where Raquel wrote her phone number, and calls Raquel. Amy thinks quick in a crisis. It’s Raquel’s pilates night, so she doesn’t answer. Suzanne is sitting on the bumper of an ambulance, staring at Dr Weaver in a nearby car. They appear to be communicating telepathically. I knew Tony Curran was up to no good again.

Amy gets ready for bed as soon as she gets home. Suzanne comes to check on her and strangle her with her belt. They argue for a moment about whether it’s appropriate to wear a belt with pajamas. These two need to work out their clothing issues. Then Amy grabs an aerosol spray from her dresser, sprays Suzanne in the eyes, and escapes.

She runs to Jake’s house in her pajamas and sock feet. Jake thinks his dreams have come true, and she’s finally shown up for a booty call, “consumed by lust and desire.” He is disappointed, alas. Neither Jake nor Amy said anything I didn’t expect in this scene, but there was something about the dry way both actors played it that made it hysterical. Lewis Reeves, in particular, as Jake, added just the right touch of desperate silliness, without going over the top.

Raquel and Amy get together the next day to plan Suzanne’s exorcism. Susan Wokoma shines in this, and every, scene. I wonder if some of it was improvised, from the way she seems to just be rambling on at times. I could almost watch an entire episode of her Hell Bitch stand up routine. Raquel tells Amy that all the information they need is on the internet. I’m not sure if that’s comforting or not.

The two demon hunters head over to Raquel’s house to prepare for the exorcism, where Tyler and Amy take an immediate liking to each other. Raquel and I approve of this ship. Raquel says that Tyler used to call their mom’s vagina a fou-fou. One has to wonder how many occasions he had to talk about their mom’s vagina? But, anyway…

They borrow Tyler’s car and head off to start Suzanne’s exorcism. The Winter Soldier demon is following them. He helps them escape when they’re attacked by a group of evil demons. He knows Raquel’s name and has powers. I think we might be finding out how Raquel knows that demon semen (heh) is colder than human semen.

We see the demons who attacked Raquel and Amy with Dr Weaver, who is the leader of the demons, as it turns out. They call the demon who helped the demon hunters Sawyer. Dr Weaver tells them he’ll have to call in a big gun to take care of Sawyer. No, not Angel, you can’t take him away so quickly AGAIN.

Meanwhile, Raquel and Amy finish the exorcism ritual they started in the first scene of the episode. Suzanne writhes around, threatens them in her demon voice, then expels the demon and goes still. Amy checks her pulse, turns to the camera, and says, “She’s dead.”

Like Shaun of the Dead and Buffy, Crazyhead is funny, has heart, and addresses social issues, such as who is really mentally ill, what we’re medicating out of people, and if we should trust our doctors, or if they are actually evil demon leaders. The actors have chemistry together, and look like they’re having fun with their roles. The comedy is silly and irreverent. The pilot, at least, moved quickly, but still gave us time to get a sense of each character and their relationships with each other. I loved that the demon hunters are making things up as they go along, using their wits and the internet, just like most of us go through life. It’s a fresh twist on these types of shows, which can get bogged down in their own mythology. Let the two young women be strong and intelligent on their own, please, without a male overlord or bureaucracy to hold them back and control them. The cool soundtrack and title sequence were nice bonuses. I give the pilot an “A”. The only thing I would have done to improve it is to make some of the evil demons girls, in addition to Suzanne.

If you like Crazyhead, and you haven’t seen In the Flesh, do yourself a favor and check it out. There are only 9 episodes, but it’s one of our favorite shows of all time. After the zombie apocalypse, the zombies are partially cured. Zombism becomes more like a chronic disease and the living and the dead all have to face the consequences of their actions during the apocalypse. The show is thoughtful, warm, funny, intelligent, and character-driven. And a zombie show. With prominent gay relationships, and an exploration of relationships between people that others don’t think should be together.