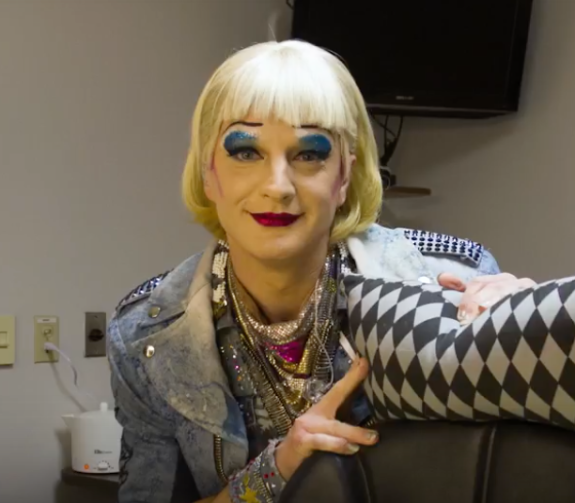 Theatermania.com posted a new interview this week with Euan Morton, who is currently playing Hedwig Robinson in the national tour of Hedwig and the Angry Inch. Euan talked about what makes his Hedwig different, and his experiences as Hedwig with audiences across the country.

“We had one woman in L.A.,” recalls Tony nominee Euan Morton, the show’s lead actor, about one performance shortly before he took over the part. “Darren [Criss] was doing the role, I was in the audience, and [this woman] said, ‘I thought this was a play about Harry Potter’s owl.'”

“I thought it was fantastic,” he laughs. “Like, didn’t you look at the posters? Does it look like an owl?…It’s bizarre.”

“You should do Hedwig! You’d be so good at Hedwig!” he says he heard again and again [after playing Boy George in Taboo]. “I think sometimes it was just because people can’t see beyond the end of their own noses. I played a man who wore outfits and makeup so I should be good at playing another person who wears outfits and makeup. I was kind of resistant to it,” he admits, “for that reason partly but also because I hate being told what to do.”

His hope is that Hedwig, whose tragic story reflects some of life’s most universal truths, will touch them in an unexpected way. “It’s the best thing I’ve done in my career,” Morton says.

What is your Hedwig like?Um – she’s really beautiful. [laughs] She’s not really beautiful, I’m kidding. She’s actually not beautiful at all. She’s sort of got my massive nose. She’s— I’m not really sure that she is my Hedwig, she’s Hedwig’s Hedwig. There’s masculine moments and I hope there’s feminine moments. There’s moments of beauty and moments of ugliness. There’s happy and sad and good and bad and there’s angry. And there’s a relationship with the audience. I think what Hedwig should be is their Hedwig. Each person leaves with their own idea of the woman they just saw. That’s what I want it to be, I want it to be universal in a way. She really does speak for everyone because what she’s saying is love is difficult and love is a search and is it a search we should even do? She’s asking these huge questions, and she has the balls to search for the answer, and that takes some guts, and that’s sort of [why] she’s her Hedwig and she’s their Hedwig, but she’s certainly not mine. She’s in control.

Tell me about the experience of taking Hedwig on tour.
Because I’m not a famous person, because I don’t come with both the sort of the joy of a famous person and sometimes the baggage of a famous person, people can really care about Hedwig more. People are coming to see Hedwig, the person, and so I’m able to put myself away in a little box and she takes over. When I feel fear, it’s her fear. When I’m having a fun time, it’s her fun time. When I’m crying, it’s her tears. It’s really wonderful. It’s the first time I’ve been able to throw myself into something quite so deeply in a long, long time.

What have the audience reactions been like?
I think in many places there are sections of the audience who are seeing this play as a safe space, this person as a role model, this music as sort of life inspiring. It’s not just a piece of theater for many of the audiences that are coming. It’s also a life-inspiring sort of moment of freedom, and we have had people walk out because it’s been too much for them. In that case, I just feel kind of sorry for them because they’re missing something really important, I think. But then we’ve had other people come who have stayed and they love it and are fundamentally changed by it. It touches them in a way they perhaps weren’t expecting.

Have you had any note-worthy audience interaction?
You know when Hedwig jumps off the stage and does whatever she chooses to do to a random stranger? Well there was one night in Denver, in the front row there was quite an aged gentleman, I’m guessing he was in his nineties. I mean, he’s aged. And I jumped off the stage and I walked up to him and I thought, “Oh god, I picked a ninety-year-old.” And I then I just made out with him. We made out and afterwards I came off the stage and I thought, “What’s he gonna do? Is he gonna leave? Is he horrified?” And I should never judge a book by its cover because he loved it. He was so open and wide-eyed and thrilled by that experience. You look at someone and you think something about them and it turns out that you were wrong and that’s what [Hedwig] doesn’t want people to do, so I had a moment of learning, too, as an actor and as a character.

What is it like to perform Hedwig across America in this political climate?
I’m thrilled to do it at this point in America’s political and social history. I’m gonna go to Durham, North Carolina, I’m gonna go to St. Paul, Minnesota, Detroit, Michigan, but look, Hedwig’s done this before. If she can work as a checkout girl in Junction City, Kansas, I can play Hedwig in Durham, North Carolina. I’m learning my life lessons from her. She’s brave and she’s bold and she’s sexy and she’s ugly and she’s everything we should all be, straddling the bridge in between.