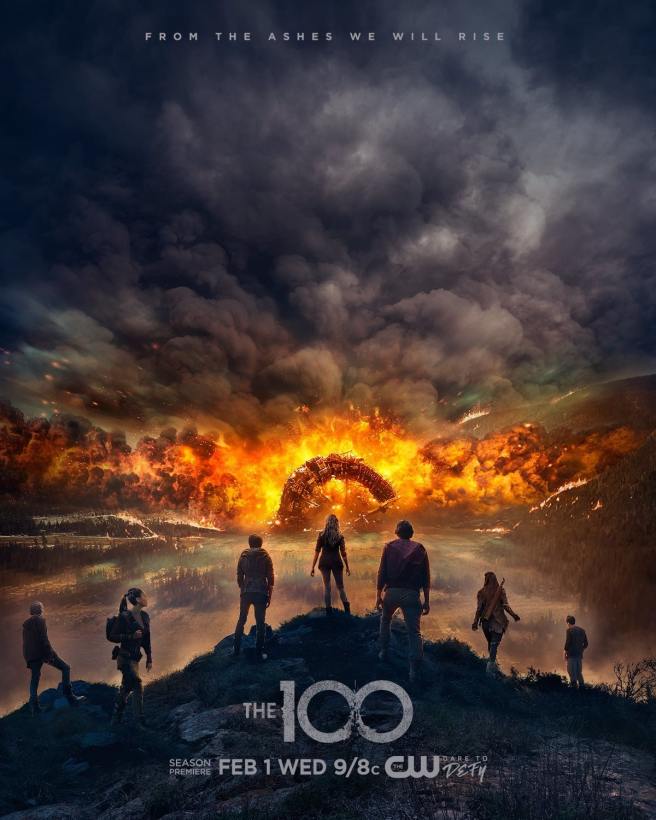 This is definitely the most stunning poster this show has ever released. My heart starts to race a little bit just looking at it.

There are several things I notice about this picture that are especially interesting to me, beyond its sheer beauty and sense of motion. Specifically the fiery, explosive motion coming at you.

It may seem strange, but what struck me first was the fact that the three people in the center are Clarke, Bellamy and Monty. Clarke in the center and Bellamy just off from her is no surprise, but Monty being part of the main three certainly is, and it’s a very happy surprise for me. I adore Monty. He’s kind and smart and cautious, but when he needs to be ruthless, he will be ruthless. I’ve always felt that he’s an invaluable member of the team for those qualities, and it seems that he’s starting to move up in the ranks of the team leaders. (Maybe he’s the Duke?)

The team has had a hole in it since Finn’s death. Finn was creative, smart and quick thinking. Having him around gave both Bellamy and Clarke something they’ve been missing since his death. Monty has similar qualities to what Finn had – compassion for all people, no matter where they’re from; creative and smart; and a level-headed way of seeing things no one else has. He has other skills that are similar to Finn’s as well. Finn was a tracker, while Monty knows about medicinal and edible plants – both special skills relating to nature and basic survival on Earth, which will be particularly important for the upcoming battle with the planet. Monty has slowly been gaining confidence, culminating in killing his mother. (TWICE. I told you, the boy is ruthless. *heart eyes*) We saw towards the end of last season how tough and mature he’s become, implying that he’s ready to replace Finn as third in command, with Clarke and Bellamy. (Except he’ll obviously be a little more equipped to handle this life than Finn was.) With his calm, logical, and compassionate yet ruthless nature, I could see him becoming a rock for Bellamy and Clarke. (He’s sort of like Spock.) That was foreshadowed when the three in the control room that made the decision to destroy Mount Weather were Clarke, Bellamy and Monty. Monty’s trauma from contributing directly to those people’s deaths was mostly ignored last season, and I’m hoping that through his dealing with it (and other things like murdering his mother), he’ll grow into a stronger leader.

Anyway, I swear this isn’t just a love letter about Monty. (I do love him so.)

Let’s talk SYMBOLISM here. The fallen Ark exploding. To me, this seems to be a representation of the end of an era on multiple levels. For one thing, it shows VERY CLEARLY that space is not our solution this time. This is both frightening and hopeful. The Ark, which saved so much of humanity last time, is gone, no longer an option. But the Ark isn’t just a symbol of refuge. It’s also a prison, literally and metaphorically. Life on the Ark wasn’t good for many people, and wasn’t great for anybody. The Earth has always represented freedom and life, but also danger and difficulty. Symbolically, this image firmly secures that Earth is where the characters will be staying, which fits with what we’ve heard in interviews about season 4: the enemy is the Earth. But the Earth is also their refuge.

The explosion of the Ark also represents the end of the way of life lived on the Ark. Since early on in the series, when Clarke told Bellamy in episode 4 “We don’t decide who lives and dies, not down here,” the Ark has represented a necessary but deeply flawed way of life. That theme continued into season 3 with Pike and his followers trying to stick to the way of life on the Ark. Given the constant talk of hope surrounding season 4, I’d guess that this will be a season of the new, progressive way of life that living on Earth permits.

Then there’s the way the characters are positioned. The way Clarke is standing is very traditionally Clarke – still, statuesque, but suggestive of motion, like she’ll leap into action the second she needs to, but for now is assessing the situation in front of her. Bellamy is stepping as if he’s just arrived to witness this event, which is interesting to me, but I’m having a hard time finding specific symbolism in it. Monty looks like he’s collapsing emotionally. The most interesting to me are Raven and Octavia, in the same place in the lineup on opposite sides, mirroring each other – both are in motion, Raven carrying something as if she’s traveling a long way. Their attention is turned toward the explosion, but they’re not as purely focused on it as the others. Octavia looks as though she was on her way somewhere and was caught by surprise, or is moving closer to get a better look. Raven, however, looks unsurprised by it. Unlike the rest, she’s actually turned slightly away from the spectacle, as if she’s concerned with other things.

I’m not sure who the two on either end are – the one on the right looks like maybe Murphy? It would make sense for the other one to be Jasper, but I can’t make him look like Jasper or anyone else.

Only two more days till the season 4 premiere!!!

View all posts by Metamaiden