HULU released a full length trailer today ahead of this weekend’s NY Comic Con for their upcoming Seth Rogen-Evan Goldberg produced comedy series, Future Man. The time traveling, video gaming, slacker-saves-the-world show is a Back to the Future meets 12 Monkeys fusion that looks to be Seth Rogen’s most charming outing yet.

Watch the trailer and read more after the jump.

Future Man stars Josh Hutcherson as the Marty McFly of our time. Here’s the description of the pilot:

Josh Futturman feels stuck in his dead-end job as a janitor so all he really does is play Biotic Wars, an unbeatable videogame the rest of the world has given up on. But when Josh beats the game, mysterious visitors from the future appear: the world is in danger, and Josh is the only one who can save it.

A janitor by day/world-ranked gamer by night is tasked with preventing the extinction of humanity after mysterious visitors from the future proclaim him the key to defeating the imminent super-race invasion.

Marty’s Josh’s just playing his game and cleaning floors, when, after he reaches the end of his latest game, a couple of warriors from the future show up to spoil everything. Josh has unknowingly been in training the entire time he’s been playing the game, and, as the first person to reach the end, he wins the prize of stopping the end of the world. To do that, he’ll need to time travel and moonwalk. The dance, not the kind that requires a real space suit.

That’s where the charm comes in. I wasn’t sold on Josh Hutcherson AT ALL in The Hunger Games movies. His Peta was lacking the charisma and sweetness that made book Peta my obvious choice for Katniss to end up with. But, in this trailer, he and the characters/actors he’s surrounded by are having loads of good-natured, spoofy, self-aware fun while they try to stop a herpes remedy from somehow getting out of control and bringing about the end of the world. The silliness of the premise can only help in a show like this.

Josh is surrounded by an experienced supporting cast, including Ed Begley, Jr and Glenne Headly as Josh’s overly supportive parents. Eliza Coupe and Derek Wilson play the video game characters come to life who must shepherd Josh through his mission to save the world.

For me, a little Seth Rogen goes a long way, both as an actor and a producer. He has some great, funny ideas, but then he often beats them into the ground until they turn mean-spirited. For example, season 1 of Preacher was fantastic, then season 2 got caught up in its own darkness and started running around in circles in the middle of the season. If Future Man can avoid that trap, it looks like it will be a fun, satirical show that can either be just plain old silly or give us biting social commentary, or both, depending on the episode. Fingers crossed.

Josh Futturman hasn’t amounted to much. He still lives at home with his parents, has a dead-end job as a janitor at Kronish Labs, a sexual disease research centre. On account of sickly adolescence, he’s socially inept, has low self-esteem, can’t approach women.  The only thing he excels at is Cybergeddon, a video game set in a dystopian future where his character, Future Man, has the top ranking in the world. When Josh beats the final level, he’s visited by characters from the game who claim it is a training manual and he’s been selected to travel back in time and help them save the world. Is he ready? Absolutely not….

A futuristic soldier, a character in the Cybergeddon video game, Tiger is a sexy, tough and extremely intense. She and her cohort, Wolf, recruit Josh to travel back in time to save the world from the hellish landscape she left behind. This mission means everything to her, and she’s prone to flying off the handle, every time Josh proves himself to be inept. She has the difficult task of controlling an idiot (Josh) and a maniac (Wolf) while keeping everyone focused on the mission. On top of all this, she’s hiding a secret that could unravel everything.

A futuristic soldier, another character in the Cybergeddon video game, Wolf is a grizzled, deadly action hero. After years of fighting, he’s desensitized to violence and human emotion. He’s basically an animal; he’s destructive, lacks hygiene and interpersonal skills, but is fiercely loyal to Tiger. Wolf has no respect for Josh and no faith in his ability to carry out the mission…

Diane is Josh’s nurturing, ever-supportive mother. Her love for him, while unyielding and sweet, is also a detriment to his growth. She makes it almost impossible for Josh to move out; she does all his cooking, cleaning, laundry and dotes on him constantly. She’s recently retired and is getting back into smoking pot on a regular basis.

Gabe is Josh’s loving, cheerful, well-intentioned dad. He is always thinking of ways to bolster his Josh’s low self esteem, and constantly makes excuses for all of his son’s failings. Like Diane, he’s also retired and back into smoking pot. 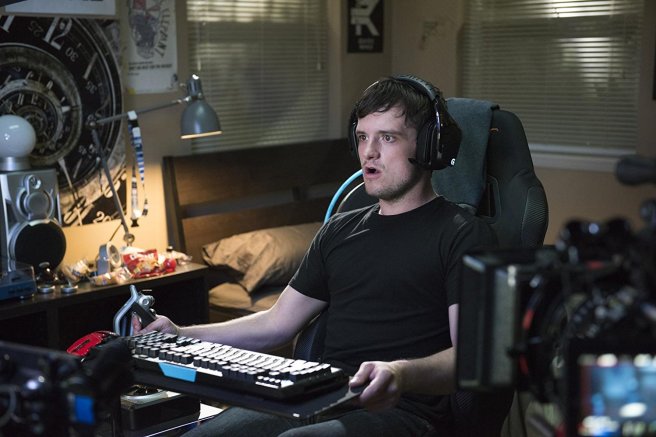