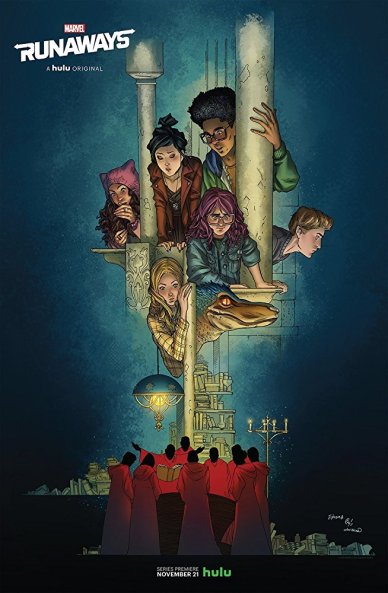 Marvel’s Runaways, now streaming on HULU, is based on the comics by Brian K. Vaughan and Adrian Alphona. Vaughn serves as a consultant on the show. Runaways takes place in the Marvel Cinematic Universe, the shared continuity of the films, the Netflix shows, and the ABC shows (and probably more). HULU released the first three episodes this week, and will release new episodes weekly into January.

The first three episodes are meant to be watched together as a unit. Episode 1 gives us the perspective of 6 kids as they reunite as a group, after drifting apart for the 2 years since the death of Nico’s sister, and they make some life changing discoveries. Episode 2 gives us the parents’ perspective of the same fateful day, as they prepare for and hold a meeting of their charity group Pride, and we discover that they aren’t who they appear to be. Episode 3 unites the groups and moves the plot forward from the night of the parents’ Pride meeting in Episodes 1 and 2, giving us a sense of what the show will be like going forward.

It’s a good way to do an extended pilot for a show with a large cast and complicated backstories, so that each character gets their due and we get an introduction to all of the subplots. It’s hard to imagine how they’ll keep up with everyone on a regular basis, but Agents of SHIELD manages to keep up with a large cast by keeping the plot moving quickly, rather than dwelling on slow character moments and artistic cinematography in the style of the Netflix Marvel shows.

This show seems like it’s going to be closer to the lighter, brighter look and feel of ABC and FOX’s Marvel shows. These episodes keep the plot moving without feeling rushed. They have time for some humor and fluffy character development. Some elements are introduced that feel like they will be part of long term mysteries, while others are taken care of within one episode, or the three episode arc. We spend enough time with each kid to develop affection for them, and to worry when they’re in danger.

Both SHIELD and Agent Carter have managed to give us quality visuals, solid acting, and creative plots without going in the brooding direction of the Netflix MCU. This show is very much in that vein, but focussing on families instead of spies. So far, Runaways has established stylish sets and looks for the wealthy parents, and very individual looks very each kid. The kids are all stock types with a twist, as is common these days. They even name each other’s types, at one point. No doubt the characters will all expand away from their types over the course of the season.

All of the actors, child and adult alike, are charismatic enough that I was able to remember the individual characters and the basics of who they are by the end of the first three episodes, even though I don’t read the comics. That’s what you basically ask of a pilot, so mission accomplished. The kids are all amazing. Lyrica Odano as Nico and Allegra Acosta as Molly stood out the most, but they also have the most emotional scenes.

There are some old favorites among the adults, including Ever Carradine (The Handmaids Tale), Kevin Weisman (everything, but Roswell is closest to my heart) and James Marsters (Buffy the Vampire Slayer). Among the rest of the adults, who are all great, stand outs are Brittany Ishibashi as Nico’s ice cold mother Tina, Ryan Sands as Alex’s self-made father, Geoffrey, and Annie Wersching as Karolina’s cult leader mother, Leslie.

Runaways distinguishes itself from many of the other MCU properties by having a soundtrack and sound design that often take front and center. Sometimes a modern song is used to highlight action or for a transition. Sometimes it’s just that the background music and sound effects add so much to the story, including clues that will be important later. The sound design is one of the major features of the show that helps sell the atmosphere that the showrunners are going for: a spacey New Age sound blends with spare, clean architecture, white clothing and overly peaceful, dronelike behavior at the Church of Gibborim; the light, smooth jazz of the wealthy parents adds to the gloss of the sets, costumes and make up; the current, urban songs for the kids remind us that they are modern kids and they live in a world that’s dangerous.

The cinematography is well done, with the camera work and lighting style changing according to setting. The tiny bit of CG that’s in these episodes is attractive, although that’s probably the wrong word for one particular family pet! The opening credits alone are worth watching, as they flash through images that are reminiscent of the show rather than directly involved, except for the insertion of several works of street art that are more direct.

The elements of the show all come together to make a smart, chic, urban environment with gritty edges. The group of kids all have chemistry together so that it’s believable that they’ll be ready to take on their parents as a group. The parents all have flaws and edges that bring out the selfishness in even the most benign seeming among them, making them believable as a group of villains. The characters and storylines are compelling and intriguing right from the start. This looks like a show with the potential to last. I’m looking forward to following it.

One thought on “Marvel’s Runaways: Review of Episodes 1-3”