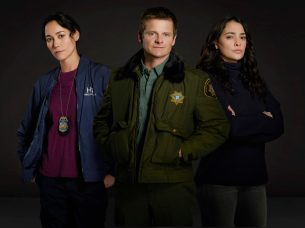 After a massive 24 hour bloodbath, more than 20 broadcast network shows have been cancelled this week, along with a fair number of cable shows, including SYFY’s The Expanse. The Crossing and The Inhumans were among the last to fall this afternoon, though neither is a huge shock. The cancellation of The Crossing after it’s only aired 6 episodes/half of its season, is, however, ironic. TV critics predicted that ABC would cancel the show without even giving it a chance, and asked ABC why they should bother to get invested in the show. The showrunners assured the critics that the network would give this show a fair shot. Right.

The cancellations have hit genre shows and shows starring minorities/women especially hard, as they did last year. The shows being announced as replacements are a lackluster bunch of family shows, procedurals and medical dramas with a sprinkling of diversity in the supporting casts. The recent era of creative television and mainstream genre shows is over. I think it actually ended when Sense8 was cancelled (season two had already made the two previously-straight, white, male characters the most important, as the de facto leader and the victim in need of rescue, thus undercutting its entire premise) and TV killed all of the lesbians in one season. (And then didn’t even mourn them.) Now the last remnants are being swept away so that we can go back to the 90s and more right wing comedians can revive their cancelled shows.

I haven’t heard anything about Agents of SHIELD yet. They may be waiting for tonight’s episode, or even next week’s episode, to air before they make a big announcement, so that they don’t give spoilers away. Maybe Graviton or Thanos will kill everyone, so it’s a moot point. No agents, no show. Or maybe it will be a completely revamped show based on the next episode or two. I’ll post something when it’s announced.

(But tonight I’m going to Les Mis, so it’ll be late if they announce it surrounding the show!!)

I’m not sure how much new content is going to be left for me to write about after this season, but there’s always all of the shows that I didn’t get to yet that are streaming on Netflix, and all of their international shows. The Ministry of Time looks like a hoot, and I’ve kept meaning to get around to Erased.