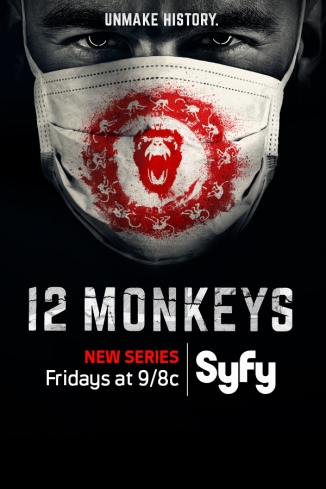 12 Monkeys was a Syfy network series, loosely based on the 1995 Terry Gilliam film of the same name, which ran for 4 seasons/47 episodes, from 2015-2018. It focused on a near future post-plague world and the survivor, James Cole (Aaron Stanford), who is sent back in time from 2043 to the decades before the plague in order to stop the deaths of 7 billion people.

Though the series uses concepts and characters from the film, it’s largely left the plot of the film behind by the end of the pilot. In the original 12 Monkeys film, the Army of the 12 Monkeys is a red herring. In the series, it’s a vast, secret organization which is responsible for the plague. Cole and Katarina Jones (Barbara Sukowa), the scientist who sends him back in time, assemble a time traveling team who oppose the Army of the Twelve Monkeys and their mysterious leader, the Witness, in a war to control the fate of the timeline.

In the future, post-plague world, Katarina Jones and her people find a damaged recording made in 2017, at the height of the pandemic, by Dr Cassandra Railly (Amanda Schull), a CDC virologist who specializes in epidemics. The recording asks “Cole” to hurry and names “Leland Frost” as the originator of the plague. With this starting point and a time machine that barely works, Dr Jones sends James Cole, a barely civilized scavenger, back in time to interview Dr Railly in order to learn further details about the start of the pandemic. His mission is to use the knowledge he gains from Dr Railly to stop the plague virus from being released.

Of course it’s not as simple as that. Time travel isn’t precise enough yet to get Cole to the correct moment in Dr Railly’s timeline. He arrives in 2013, kidnaps Dr Railly, figures out that he’s too early for her to have the information he needs, then gets shot by the police in the process of jumping to a later point in her life. When she meets him again in 2015 and sees his fresh bullet wound, 2 years after she watched him receive it, Dr Railly is convinced that Cole is telling the truth. Together, they investigate the origin of the virus, which eventually leads them to Leland Goines (Zeljko Ivanek), code name “Frost”.

As viewers will expect, by the end of the pilot they’ve realized that Goines is only a piece of the puzzle. Information they glean from him, and later from his daughter, Jennifer (Emily Hampshire, brilliantly playing the role originated by Brad Pitt in the film), will draw them deeper into the conspiracy than they could ever imagine. But the Army of the 12 Monkeys is way ahead of them, already expert at time travel and manipulating events to suit their agenda.

While I love this series, the pilot is not one of my favorite episodes. I suggest watching the first several episodes, or even all of season 1, before you make a decision about the show. The plot is intricate and fast-paced, requiring close attention if you want to keep up with all of the clues and mysteries. There are set ups that don’t pay off for 2 or 3 seasons, but all of the dangling threads are addressed by the end of the series. It’s a great show to binge watch for that reason. If the episodes are spread out over several months, never mind years, it’s difficult to remember all of the tiny details that become important later.

But 12 Monkeys can also simply be watched as a fun romp. It’s one of the best scifi action-adventure series ever, with enough episodes to make it a meaty experience, but not so many that you feel like you’ll never finish. It’s well-made from a technical aspect, having been nominated for and won several cinematography awards. There is an overall series long quest, plus each season has its own arc. The series is full of great stories that range from the pandemic, various future dystopias and alternate realities, time travel, romance, detective noirs, comedy, Cold War spy vs spy, World Wars 1 and 2, mad science experiments, terrorism and revolution, fantasy to an art heist or two.

Some episodes can be viewed as entertaining stand alones, with familiar guest stars such as Christopher Lloyd, Matt Frewer, James Callis and Madeleine Stowe, as well as many other faces that are recognizable to genre fans. Jay Karnes’ arc of episodes is a particular favorite.

If you want to examine the episodes more deeply, the show also explores philosophy; the ramifications of scientific and technological progress; the long term effects of political decisions, corporate greed and organized religion; what long term poverty does to people on a personal level and on an organizational/ disorganizational level; and more. 12 Monkeys extensively explores the concepts of cycles, motivations, emotions, and morality. The ideas that are explored rotate through characters, groups and time periods, examining how varying circumstances affect the outcome, and how they don’t.

But this is no Ground Hog’s Day- 12 Monkeys is well-written and original. You have to be paying attention to pick up on all of the social commentary and loops. In the end, it’s a show about love, loyalty, persistence and sacrifice. Showing the relationships between the characters is one of the things it does best. Many types of love are highlighted, including familial, romantic and brotherly. Intense religious devotion and ideology are explored as well. I would say that only same sex love is short changed. It’s hinted at, arguably to the point of queerbaiting and mild homophobia, but never fully expressed.

The characters are likeable, well-cast and acted. They all have chemistry together, including the recurring and guest cast members. Aaron Stanford, Amanda Schull, Barbara Sukowa, Kirk Acevedo, Emily Hampshire, Alisen Down and Todd Stashwick comprise the core cast who circle in and out of relationships with each other for 4 seasons. They are all outstanding as individuals and in their many configurations.

The female characters are complex and fill a variety of roles in the story. The main cast is mostly white, with only a couple of men of color to add diversity in the first season. The show eventually adds women of color in background/minor recurring roles, but it also drops Kirk Acevedo (José Ramse) as one of the regulars. 12 Monkeys had a female showrunner, Natalie Chaidez, for season 1 and a few female writers and directors over the course of the series.

Within the series universe, physical, medical and mental disabilities and differences were extensively considered throughout the show’s run. One of the main characters struggles with mental illness, while others have chronic illnesses, addictions, or susceptibility to the plague virus that makes them functionally disabled in the future. There are a variety of conditions that are unique to the 12 Monkeys universe that can be considered gifts or disabilities, depending on the situation, and this is also explored.

The series is character-oriented enough that each main and recurring character has a chance to be fleshed out. Several switch between villains and heroes, then back again. I found the main villain particularly compelling. Not because they’re so out of control or murderous, but because they’re trying so hard to understand themselves and their place in the world, and then to create a world where they can feel free and okay about themselves. This isn’t the usual selfish, OTT megalomaniac. All of the extraordinary actions in 12 Monkeys are motivated by very human reactions.

Because 12 Monkeys is about a global pandemic, there are some eerie similarities that predicted how the real world would change in a few years. Without the comforting distraction of zombies, watching a show in 2020 which depicts the death of 7/8 of the world’s population due to a virus, followed by an inevitable break down of civilization, might not be for the faint of heart.

On the other hand, this show is sustained by the characters’ belief that they can find a time or place in the world where they can be happy and with the people they love, even if their loved ones are currently lost to them. Throughout the grueling struggles in the series, the characters never give up hope that they can make things better in the long run. They have an amazing amount of grit that carries them through as a group, even when some stumble along the way. That’s a powerful message.

All of the struggles are brought to a big finish in the series finale, which is one of the best I’ve ever seen, also in my Top 5. I cried happy/sad/emotional tears throughout the last 2 or 3 episodes of the series. There’s nothing I would change about the ending. The characters and all of the many dangling plot threads are given closure in a satisfying way, with just a tiny opening left should someone want to revisit the universe again in a spin off. Given the complexity of the story and everything viewers go through with these characters, it was an incredible achievement for the showrunners to also bring the story to such a perfect end.

This show was created by showrunners with a clear vision and an ending in mind from the beginning, which is reflected in the show’s consistency across 4 seasons and in all areas of production. 12 Monkeys was created and executive produced by Terry Matalas and Trevor Fickett. Richard Suckle, Charles Roven, Natalie Chaidez and Jeffrey Reiner were also executive producers. It starred Aaron Stanford as James Cole, Amanda Schull as Cassandra Railly, Kirk Acevedo as José Ramse, Noah Bean as Aaron Marker, Todd Stashwick as Teddy Deacon, Emily Hampshire as Jennifer Goines, Barbara Sukowa as Katarina Jones, Demore Barnes as Marcus Whitley, Alisen Down as Olivia Kirschner, Andrew Gillies as Julian Adler, Tom Noonan as the Tall Man and Brooke Williams as Hannah Jones. 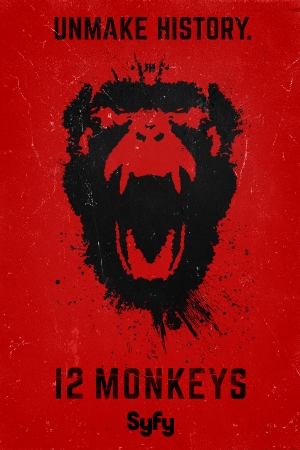