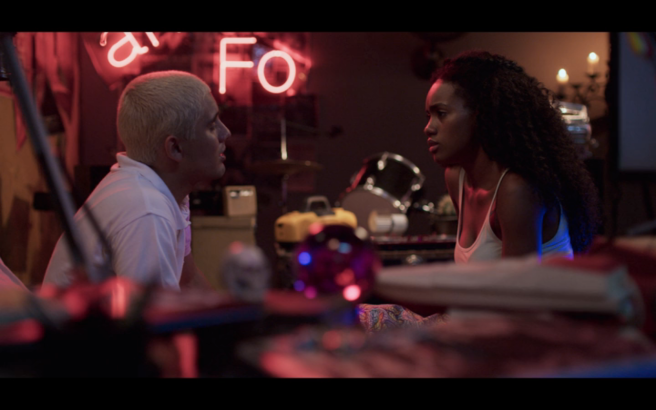 Episode 3 begins with Johnny Ki explaining the threat he made to Carmen at the end of episode 2. He shows her a video his mom made the last time he saw his parents, then explains that his parents were killed in a boating accident. He was learning to drive and lost control of the boat, so he blames himself for the crash. He wants Carmen to help him talk to his dead parents so that he can get their reassurance that they don’t hate him and that they forgive him.

Carmen can’t speak to the dead, so she can’t help him. But she assures him that real love is unconditional, so, wherever his parents are, they still love him and have forgiven him.

Carmen tries to leave, but Johnny questions why she can levitate, but she can’t speak to the dead.

Because those are two really different powers?

END_OF_DOCUMENT_TOKEN_TO_BE_REPLACED

In episode 2 of Always a Witch, Carmen settles into the 21st century as she makes an arrangement with Adelaida to stay at the hostel while working there. She also gets acquainted with a new group of friends, while searching for clues about Ninibe’s disappearance and trying to stay one step ahead of Lucien. Carmen audits biology classes as part of her modern cover story, which brings her into contact with many of the people she needs to meet and increases her knowledge about the 21st century and witchcraft.

It’s so refreshing to watch a show about a witch who fends for herself, without an older male handler acting as a father figure to “guide” her actions and education. Carmen has various friends, advisors and mentors in her life, as any normal person does. But there’s no one in her story whose opinion she allows to take precedence over her own, such as a vampire slayer’s watcher, the Charmed witches’ whitelighter, or the male partner of virtually any fictional woman. In both time periods, Carmen listens to the opinions of others, then makes her own decisions. Not even Cristobal can sway her opinions or decisions for long.

Since I hate the trope that a powerful/magical woman always needs a male handler or she’ll become out of control (looking at you right now, Roswell, New Mexico), I’m thrilled to see Carmen able to think for herself at 18. Once Cristobal teaches her to read and write, she adds those skills to her supernatural powers and begins to leave the mindset of a slave behind. During her arrest and trial, it’s clear that existentially, her mind is already free. The Inquisidor even accuses her of seeing herself as equal to her master. It’s not an attitude she develops in the 21st century.

END_OF_DOCUMENT_TOKEN_TO_BE_REPLACED

This is a recap. My review of Always a Witch S1 is HERE.

Always a Witch is the story of an enslaved, time-traveling young witch who escapes the danger she faces in Cartagena, Colombia in 1646 by jumping to the Cartagena of 2019. In the present day, Carmen Eguiluz, the young witch, must perform a mission for the wizard who helped her time travel. Then she can go back to her own time to save the man she loves from being shot and killed when he attempts to defend her, and stop her own execution as a witch by burning at the stake. But once she gets to 2019, completing her mission is more complicated than she expected. She makes friends and enemies as she navigates the future, and it takes teamwork to achieve her goal.

The episode begins with a seaside vista of sailing ships anchored off the Caribbean coast of Cartagena, Columbia, in 1646. On the shore, a young, dark-skinned woman is chained to a cart, pulled by soldiers. She is being brought to her execution in a coastal fort made from local stone. Soon, the woman, Carmen Eguiluz, is tied to a stake, with a pyre beneath her feet, ready to be burned as a witch.

The Inquisidor reads a heavy-handed list of charges against her: