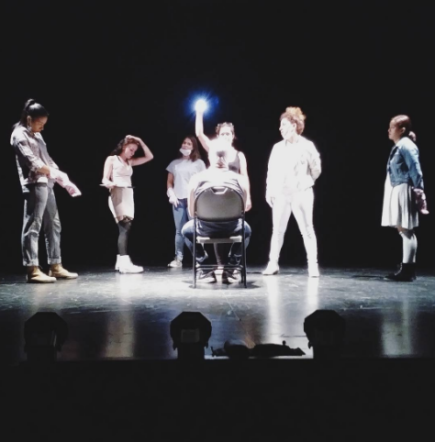 We had notes that we didn’t have room for in our review of GYNX by Alicen Grey, so, in the spirit of an “outtakes” post, here are some more thoughts on the play:

In some ways, the play reminds me of Disgraced, the 2012 Pulitzer Prize-winning Broadway play by Ayad Akhtar about the dehumanization of Muslim men in America. Disgraced showed us that stereotyping and racism can lead to the exact dangers that the dominant culture is afraid of. Its characters were realistic people, but they were also stereotypes and symbols. GYNX uses the same method with its characters and story.

END_OF_DOCUMENT_TOKEN_TO_BE_REPLACED

Last week, Metamaiden and I traveled to Denver to see the new Disney musical adaptation of the animated movie Frozen. It was, shall we say, a less than completely positive experience. But, I’ve written thousands of words about that already. In my last post about it, I wrote that I was going to support a feminist off-Broadway play to offset my inadvertent support of what Disney had done to Frozen. GYNX is that play.

Alicen Grey, playwright and producer of GYNX, saw my post, and offered us a recording of their opening night performance. So, Metamaiden and I sat down in Albuquerque on the afternoon of Sunday, 8/27/17, and watched this radical feminist theatre revelation while the final performance of its current run was happening in NYC. It was playing at the Hudson Guild Theater as part of the 2017 NY Summerfest. GYNX is also a Semi-Finalist in the MultiStages 2017 New Works Contest, and it’s not hard to see why.

GYNX was everything I hoped it would be, and more. I felt like Alicen had lived my life, and was seeking my revenge. The play is powerful, haunting and cathartic all at once. It’s impossible to be unaffected by it. It ends with a question that you’ll think about for a long time, if you aren’t already thinking about it.

END_OF_DOCUMENT_TOKEN_TO_BE_REPLACED

I thought I was done writing about the Frozen live musical adaptation, but I guess I’m not. The thing is, both Metamaiden and I aren’t done thinking about it. The new song Monster, written by Oscar, h*ell, EGOT-winning songwriters, is stuck in our heads, telling us over and over that being a powerful woman is dangerous, that we should either leave and go live in solitude or, even better, kill ourselves, so that we don’t destroy our country and everything we hold dear.

And that’s only the beginning. I, personally, like most adult women, am a sexual assault survivor, which I have rarely, if ever, talked about. (Probably also like most women.) The scene where Kristoff rips Anna’s dress off and forcefully throws it off stage, while telling her how stupid she is, was very triggering for me, especially after seeing it twice.*