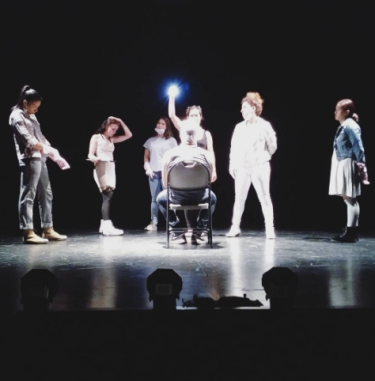 I thought I was done writing about the Frozen live musical adaptation, but I guess I’m not. The thing is, both Metamaiden and I aren’t done thinking about it. The new song Monster, written by Oscar, h*ell, EGOT-winning songwriters, is stuck in our heads, telling us over and over that being a powerful woman is dangerous, that we should either leave and go live in solitude or, even better, kill ourselves, so that we don’t destroy our country and everything we hold dear.

And that’s only the beginning. I, personally, like most adult women, am a sexual assault survivor, which I have rarely, if ever, talked about. (Probably also like most women.) The scene where Kristoff rips Anna’s dress off and forcefully throws it off stage, while telling her how stupid she is, was very triggering for me, especially after seeing it twice.*

When I was young, I stupidly got into a car with two young men. One of them tried to rape me in the back seat. After several minutes, I was able to physically fight him off, but only because he was very drunk. The other man sat and watched. After I fought (and I do mean FOUGHT) the attempted rapist off, his brother took pity on me and dropped me at a pay phone. It never occurred to me to contact the police, because I knew that I had asked for this to happen to me by getting into the car in the first place, even though all I had been offered was a ride home. Notice I still think of myself as stupid for being trusting, rather than blaming them for being the violent criminal and his co-conspirator that they were. More than 30 years of the women’s movement later, this is what society still teaches women. This is what Frozen the Musical teaches women.

In the movie, Anna meets Kristoff in Oaken’s store. Oaken is a respected business owner and family man, a symbol of the community. He and Kristoff seem to already know each other, since Kristoff knows which shelf his supplies will be on and how much his supplies should cost. So, community (albeit male) approval of Kristoff as a decent man who can be trusted is implied before Anna goes off into the wilderness alone with him, and this is borne out by Kristoff’s behavior and their equal relationship.

In the musical, they meet alone in the forest, he insults her from the beginning, she is far less than his equal, and he rips her clothes off within a few minutes of their meeting. She’s fine with him taking her clothes off!!! It’s played for laughs. He is a complete stranger. She’s a young woman walking alone in the forest. This is a Little Red Riding Hood/Big Bad Wolf situation, the archetypal situation all little girls are taught to fear for a very good reason. IT HAS ALWAYS BEEN DANGEROUS FOR WOMEN TO WALK THROUGH THE FOREST ALONE, WHETHER IT’S A REAL OR METAPHORICAL FOREST. IT’S ALWAYS BEEN DANGEROUS TO ENCOUNTER A STRANGE MAN ALONE IN THE DARK OR IN THE WOODS.

And, to make matters worse, now that Kristoff appears as a metaphorical rapist (and kidnapper, as I mentioned in another post), Disney has cast Kristoff with a black man. (I’m sure I will be accused of being racist** for simply pointing this out. I enjoyed the actor. He’s very charismatic and talented. The problem is with the character assassination the rewrite has done to Kristoff’s character.) So now we have the racist element of subliminally teaching little girls that the Big Bad Wolf who will rip your clothes off in the woods (and kidnap you) is a black man.

Fairytales aren’t just cute stories. They have deep, layered meanings that stick with us long after we’ve forgotten the details of the story itself. This has been studied and written about extensively by far greater minds than mine, many of them, unfortunately, very sexist men.

But not all. I encourage you to look at the books The Heroine’s Journey, by Maureen Murdock and From Girl to Goddess: The Heroine’s Journey through Myth and Legend, by Valerie Estelle Frankel. Both are written by women who sought to extend the work of writers like Joseph Campbell. Campbell thought The Hero’s Journey doesn’t apply to women, that women are meant to stay home and be the object that men strive to return to. In metaphor and in fact, undoubtedly.

In the movie, Anna and Elsa are both fighters. They both fight physically, and with every other resource they have, for themselves, their kingdom, and the people they love. But their journeys and their fights don’t necessarily look like what a man’s fight or journey would look like. Just as many women, like me, fight physically. Just as women tend to be the caretakers of their people, in many senses of the word caretaker, and use the resources available to them.

Fairytales are metaphors. Frozen is a fairytale. Frozen is a metaphor. The movie gave girls two amazing examples of two very different women to look up to and an anthem that resonated with females around the world. The musical took those two female icons, and that feminist anthem, and stripped them of everything that made them empowering to women and girls.

And it’s misogynist. And racist. And it promotes rape culture.

So, I’m angry. Triggered. Feeling stupid and duped, again, for trusting someone. And, this time I poured a lot of money into tickets which supported the offensive material. Almost getting raped was at least free.

In the midst of all of this, Metamaiden has been asking me to donate money to help support the production of a new radical feminist off-Broadway play by a female playwright and an (almost) all female production team. The play is GYNX, by Alicen Grey. It’s a dark comedy about 4 women who are recruited to become vigilantes by a mysterious 5th woman. They round-up rapists and castrate them.

Feels pretty appropriate right now. I donated this afternoon. It’s blood money, to offset what I spent on Frozen, but I would have supported the play anyway. We need more shows by, for and about women. We need more shows about women’s honest feelings, instead of women being told to go sit in a corner, be quiet, and stop overreacting. Or, you know, to metaphorically or actually kill themselves because they’re too much trouble.

We need to stop feeling like we need to be nice all of the time. I can’t tell you how many times I started to apologize for my feelings or for being too much trouble in this post, and I’m sure that tone still comes through in parts. I’m sure this post is still offensive and too whiny to many, too. As a middle-aged woman with an invisible disability, I’m used to people trying to make me feel offensive and whiny. It mostly doesn’t work any more, but we all have our bad days.

Alicen Grey is setting up a professional recording that everyone will be able to pay to stream. I can’t wait to see GYNX. I hope “it’s lacking in the male perspective,” a criticism once used toward Lena Dunham’s Girls. That’s exactly what we need.

Donate to GYNX the Play

ETA 8/27/17: We watched the play and it’s fabulous! Review coming soon. By the way, Alicen is on the lookout for a new producer for the next stage of GYNX’s evolution. Alicen’s email is on the GYNX website or below in the comments.

*I really tried, in previous posts, to be as positive as possible about this show. I really wanted to like it. But triggering is a funny thing. In me, the trigger tends to burrow into my head like a worm, and squirm around until, days later, it’s created a giant hole that I can’t ignore anymore.

**I am white and middle class. My attempted rapist was white and middle class. This has nothing to do with race, for me. All kinds of women are attacked by all kinds of men. There is nothing that will protect you. Not social class, not age, not race, not ethnicity, not wealth or the lack of it. The only thing that might protect you is being seen as another man’s property. Some men will respect property ownership rights. Some will see raping another man’s woman as a chance to win a competition with that man.

12 thoughts on “Frozen the Musical vs Radical Feminist Theatre”