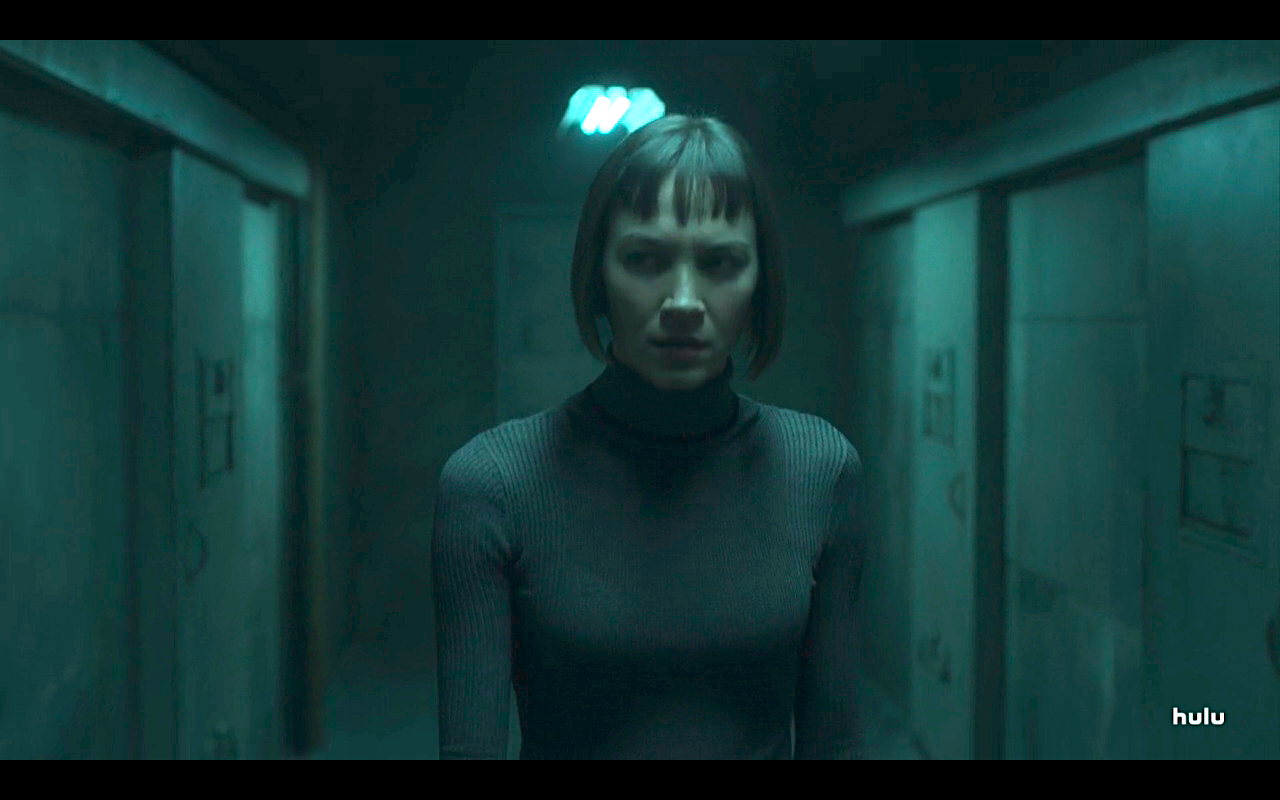 In episode 2, the Helstrom siblings begin to hash out their long standing differences, with Hastings as mediator. Ana spends some quality time with Mother while Chris and the Keeper skull get to know each other. Daimon performs an exorcism after a demon causes a fatal car accident. Gabriella and Daimon work together with new understanding. Taker meets with the leader of a mysterious group that’s hostile to the Helstroms.

Maybe we need to keep an eye on Taker.

Twenty years ago, Young Ana sat in the car listening to the Cranberries “Ode to My Family” while her father dragged the body of one of his victims from the trunk of the car to the hole he’d dug for her burial. Anna was facing the other way, but she could see what he was doing in the car’s side view mirror.

Yesterday, in San Francisco, she glimpsed a man dragging a checked blanket down an alley. It reminded her of her father and the checked blanket the body was wrapped in. She was on the phone with Yen at the time, who said the client gets to have a say in their business because he has money and now his “incredibly pretentious installation on ‘trans-generational trauma’ will be a week late…”

She hangs up on Yen because she gets a call from Taker, who asks when she last spoke to her mother. He tells her that the bodies in the crypt were from St Teresa’s Hospital. Ana is standing in front of a floral display. The flowers all instantaneously shrivel and die.

Speaking of transgenerational trauma, Ana’s triggers are coming at her fast and furious this week.

END_OF_DOCUMENT_TOKEN_TO_BE_REPLACED 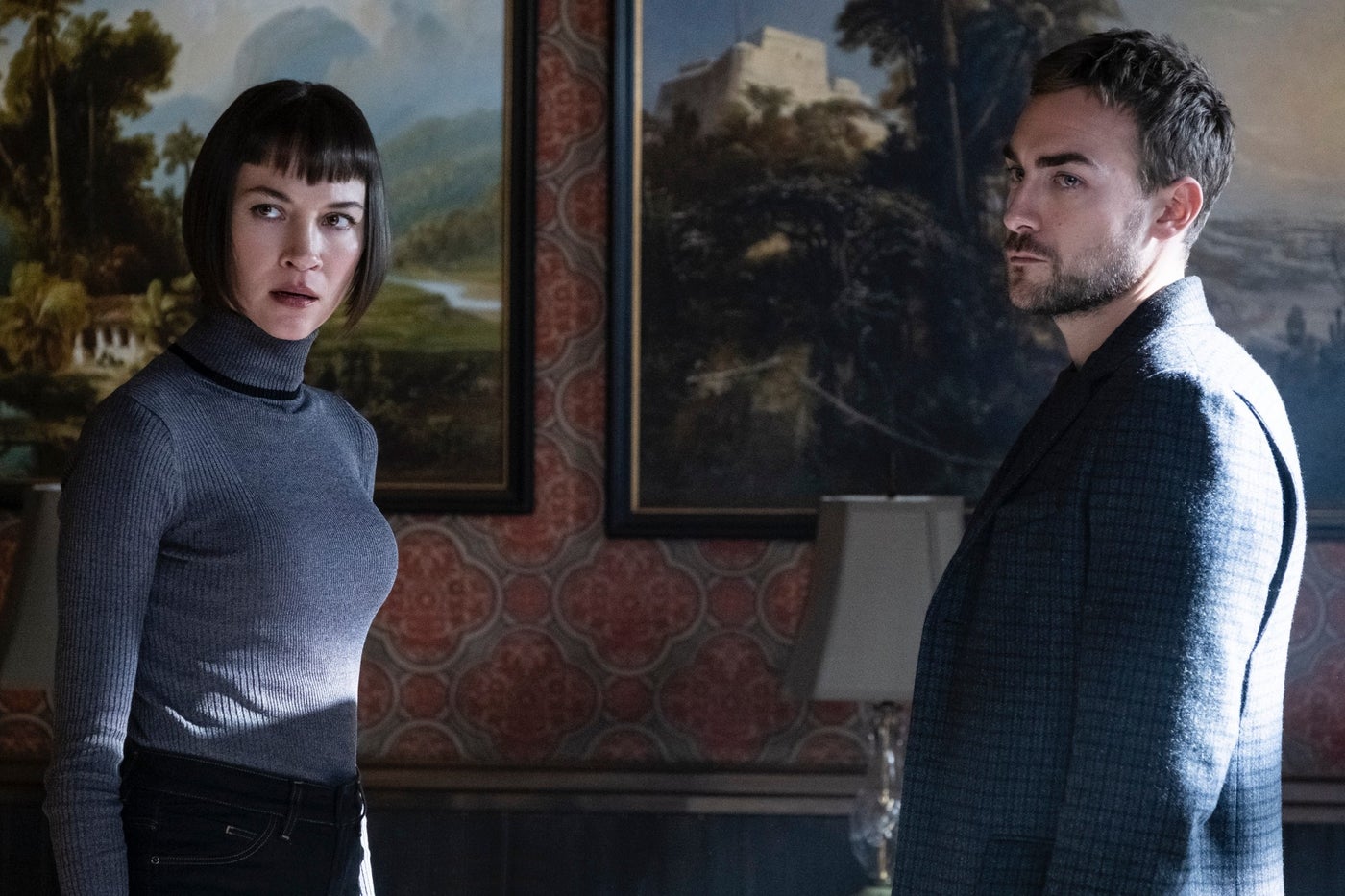 It was a dark and stormy night…

Okay, it’s Portland, so that’s not a unique situation. We’re starting this show by staring straight up at the exterior of an imposing stone hospital during a thunderstorm, so someone’s brushed up on their horror tropes. This is the Saint Teresa Center for Mental Health, an honest to goodness mental asylum where a demon lives in a woman who lives in an empty padded cell that’s basically a vault, like it’s 1920 instead of 2020. As soon as the Trump era is over and we have some standards again, someone should report this place.

TV World does love an outdated mental ward. For the sake of telling a dramatic story, let’s pretend that isn’t offensive. To some extent, this show mirrors the look and feel of the Netflix MCU’s gritty, worn, slightly retro style, even though it takes place on the West Coast rather than NYC. Theoretically, Helstrom is not in that universe, but I caught a few visual references. Others caught newspaper references to the wider MCU.

Thematically, Helstrom also follows in the footsteps of the Netflix MCU by examining the Helstrom family’s trauma, loss, mental illness and ongoing recovery, but also, more subtly, focusing on the complicated nature of privilege. As opposed to the MCU’s broad methods, Helstrom uses subtle, quiet methods to show how characters who were born with their powers, but are passing as humans, can inadvertently use them to take advantage of others, regardless of their intentions. There are no Tony Starks here.

END_OF_DOCUMENT_TOKEN_TO_BE_REPLACED

Marvel’s Helstrom is about a dysfunctional family with certain issues that run in the family. These issues are serious and sometimes spread to those around them, so various authorities and agencies have been involved with the family for decades. Thanks to these interventions, the younger members of the family are doing better than their elders. The kids struggle with a weaker version of the same issues, though, which can become harmful to those around them if everyone involved doesn’t keep their guard up.

What are the Helstrom family issues, you ask? HIV? Or perhaps alcoholism/drug addiction leading to violent abuse?

END_OF_DOCUMENT_TOKEN_TO_BE_REPLACED

This week on The Gifted, characters are faced with decisions that force them to cross lines they don’t want to cross, and work with people they don’t want to work with, in order to successfully rescue Lorna and Reed. Some are faced with the negative consequences in this episode, others will face continuing consequences down the road. Jace is just plain old screwed, and even more determined to screw everyone else in the future.

We begin with a flashback to a rescue op two years ago, at a mutant relocation facility, somewhere in Georgia. John and another mutant, Pulse, wait outside a security fence for the mutants who are inside.

END_OF_DOCUMENT_TOKEN_TO_BE_REPLACED

Welcome back to the Mutant Underground! Let’s see what those crazy mutant kids are destroying this week, and whether Reed is swinging toward the Vampire Bill or the Captain von Trapp end of the scale.

In a flashback to three years ago, Lorna and Marcos, who don’t seem to know each other well, are taking a walk outside of the compound. She explains that the building was condemned after the Oakwood riots. The National Guard stormed a nearby mutant orphanage and scared a kid into letting his powers get out of control. It destroyed the whole area.

Marcos wonders what he did in a past life to deserve the punishment of being a mutant. Lorna says she wouldn’t change the way she is for anything. She asks him what he did the first time he used his powers just for fun. Marcos tells her that he was homeless in Bogotá, he wasn’t doing anything just for fun.

END_OF_DOCUMENT_TOKEN_TO_BE_REPLACED

Moving on to the second Marvel TV series premiere of the week, FOX was clearly more committed to its show than ABC was to Inhumans, despite the Inhumans IMAX premiere. While it’s not prestige TV, The Gifted is a solid outing, with a familiar, talented cast and crew. It gets its very own Stan Lee cameo as a stamp of approval, something notably missing from Inhumans.

The Gifted is set in the X-men universe, at a time when the X-men themselves have disappeared. Mutants are being hunted down, captured, imprisoned, and mistreated in a variety of ways. There are government agencies dedicated to finding mutants and putting them away. In other words, it’s a time of mutant holocaust and genocide, though the normals justify their actions as being necessary for public safety and good people go along with it out of fear for themselves and their families. Until someone they love turns out to be a mutant.

END_OF_DOCUMENT_TOKEN_TO_BE_REPLACED

This week, we meet The Superior of the Watchdogs and he is… Zach McGowan, of The 100 and Black Sails, who is an amazing, sexy, dark, intense, commanding actor. King Roan has become one of my favorite characters on the 100. He’s playing Anton Ivanov, a rich, reclusive Russian industrialist who hates inhumans and Phil Coulson, and collects military antiques, including a submarine. He’s a traditionalist who doesn’t hold with all of these new types of aliens and humans mucking things up on earth. It seems like a role with a lot of potential, but Ivanov spent most of his onscreen time tonight trading threats with Radcliffe and looking broody and menacing. Hopefully they’ll let him off the submarine soon so that he can get involved in the action. His motivations also don’t completely make sense yet. There was some vague link to the attempted assassination of the Russian Prime Minister last season, but nothing that would explain the extreme hatred necessary for Ivanov’s level of obsession.

But first, we get Patton Oswalt times three! Sam and Billy Koenig are hanging out at their favorite arcade/bar trading movie quotes when they’re rudely interrupted by a couple of Russian Watchdogs, who kidnap Billy (Sam? No. Billy.) Sam uses his watch to notify Coulson immediately. The shot of stunt Patton leaping behind the bar to hide was especially fun.

END_OF_DOCUMENT_TOKEN_TO_BE_REPLACED 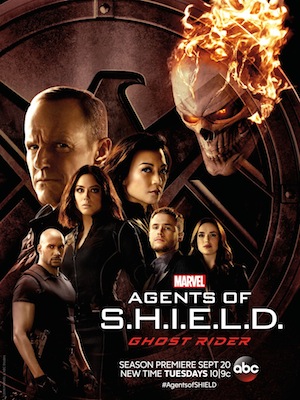 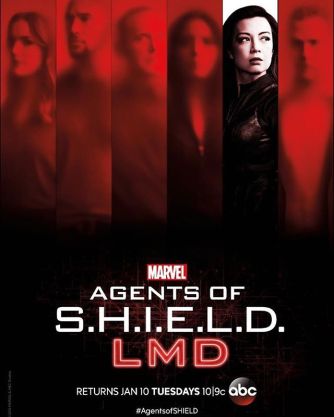 I knew I’d miss Grant Ward and his ability to instigate both plot and relationship events when Agents of Shield killed him off at the end of season 3, but holy cow, it’s like both dried up completely when he left the building. He was a complex character with an ability to draw different groups of characters together. He was one of my favorite characters for that reason, but I didn’t think the show would suffer all that much from the loss. It’s a show full of interesting characters, with a comic book universe to draw more from.

Except, for most of this season, all of the returning characters have been separate, chasing random macguffins and/or being chased most of the time, or becoming or dealing with “ghosts”, who turned out to have no plot significance whatsoever long-term. It feels like we took 8 episodes to say wow, we’ve got a guy who’s head catches fire, the movies have magic so we get to have it too, especially this extra evil book, and the world hates inhumans even more than they used to. That looks like an episode or 2 worth of plot to me. We didn’t need any of the red herring distraction of Eli’s accomplices. We could have gone straight to Eli, although even his plot was cut short and explained in very broad strokes.