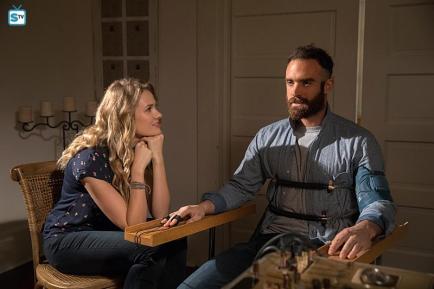 This Is What You’d Call an Ironic Episode Title

There’s an epidemic of fibs, little white lies, and straight up, bald-faced lying going around Seattle this week. Everyone is hiding something. It could be something large or small, or something ultimately meant to protect themselves or someone else, or for less selfless reasons, but everyone has at least one thing that they’re hiding. Most of the characters have multiple secrets.

Deirdre has the biggest secrets that we are made privy to, since she’s been hiding a hot ex-husband (Broadway star Will Swenson), a dancing hobby, and several dance championships. Hank and Kareema go under cover to discover what Deirdre is hiding and lying to Hank about. They attempt to compete with Deirdre and Pete, but the plan backfires when Deirdre agrees to marry Pete for a third time after they win another championship together.

Deirdre is obviously going for the safer choice with Pete. She knows exactly how he’ll break her heart again, and she’ll be ready for it. She tells Hank as much. Hank would require too much risk, and after he didn’t put himself out there for her during the strike, she’s no longer willing to go for it. Hank’s going to have to work hard to win Deirdre back. She was crushing on him for a while before she found a safe way to approach him to begin with. She’s obviously got a history of heartbreak, and has learned to protect herself. Hank can’t half-ass their relationship the way he does a lot of things in life and expect that’s going to work. On the other hand, Deirdre’s clearly in love with Hank, and Pete isn’t really going to cut it any more. I’ll be shocked if she goes through with the marriage.

Kareema still hasn’t told her brother Rohan that she’s involved with his ex-fiance, Sofia. She withholds the information as he goes through his own unique recovery steps: 1) Day drinking, 2) Despondency over trivial things, 3) Excessive self-love, 4) TRH: Totally random hookup (go Peggy!), 5) Obsession with physical fitness. When he finally gets through the last step, Kareema figures she’s safe to reveal her part in Rohan’s break up, but Rohan had deeper feelings for Sofia than Kareema realized and storms out of the bar they’re in. I think we all saw that one coming. Appearing to be ready to move on and putting on a good face doesn’t really mean you’re over it, especially when you feel betrayed. The drama of this love triangle isn’t really over.

Meanwhile, Evie and Xavier with an X are crossing “” off the Apocalysts. Xavier clearly has no sense of survival, given the questions he asks Evie, but they eventually figure it out. Xavier beats his by claiming his name is Hamish Stegner. That will be important later.

Xavier calculates that it must be about time for the pop scientist he gave his research to several episodes ago to publish it. Evie feels guilty, and finally comes clean about having seen the woman throw out Xavier’s documents. Xavier is devastated, both because Evie lied to him for a month, and because everyone who doesn’t know about the coming Apocalypse has lost a month of preparation. Evie asks Timothy to publish Xavier’s story instead, but Timothy’s publisher only wants to frame the story as another crazy doomsday conspiracy. Evie ends up using Cybermart resources to publicize a meeting for Xavier to tell the world about his theory. He decides to forgo sharing the negative side of his beliefs, since they keep driving people away, and just convince people to live life to the fullest while they can. The event is a success. Evie and Xavier reinact Singin’ in the Rain as they dance and splash through puddles on their way home. A police officer momentarily gives them the eye, but then moves on. I have a feeling that might be important later. Especially because Xavier used the dancing to deflect from having to promise Evie he wouldn’t lie to her.

Timothy did a lot of research on Xavier while he was prepping his story. Or he tried. There’s almost nothing out there on Xavier. Timothy finally discovered something ominous, though, that he thinks Evie should know. The first thing Evie notices in the article is that Xavier’s real name is Hamish Stegner.

-Hank’s face lit up when he realized he was the subject of a conspiracy WITH A CODE NAME!!!! That was like every Christmas of his life came at once.

-The show remembers it’s about a guy who believes the apocalypse is nigh, and that that’s actually kind of a dark concept.

-Deirdre has the most fascinating life on this show by far. Organized and successful at work, Hank and Will Swenson fighting over her affections, a prolific romance novelist and a champion dancer in her spare time. She’s my personal hero.

-Xavier gives up on using his slideshow or his mathematical calculations to explain his apocalypse theory, and goes straight to the flaming globe in the parking lot. I really want to hear the global warming connection.

We lose Fernberger when she admits to embezzling from her charity at the same time as she realizes that Timothy will never care as much about her as he does about Evie. I’ll miss her. It was nice to have someone who was into Timothy, and who reminded Evie she isn’t perfect. Evie can be insufferably sweet at times, while she’s shallow enough to ditch her best friend and boyfriend as soon as a better offer comes along.

By the end of the episode, the Cyberhugs program is in jeopardy, and so is Evie’s job, as a direct result of Evie’s actions throughout the episode. She sleuthed out Fern’s embezzling and confronted Fern on it, which got Fern to admit the truth and skip town because she couldn’t face the consequences of her actions. But there was another truth buried in Fern’s confession- before she started skimming off the top of her charity’s donations so that she could dress to keep up with the wealthy donors she was courting, she was unsuccessful at bringing in those big donations that huge foundations depend on. Without Fern and her illegally funded wardrobe to bring in the cash, Evie won’t have enough money to keep the doors open. In the meantime, Evie has bent the rules to help Xavier by using Cybermart’s mailing list to gather the group of people he gives his presentation to. The Cyberhugs accountant is in the crowd, and acts on his promise to himself to quit his job, leaving the organization in even worse disarray.

Every action has ripples and consequences, and they aren’t always what you’d expect. An ongoing theme for this show, and for Xavier in particular. I have a feeling Fern isn’t the only person on the show who hasn’t been ready to face the consequences of their actions, but who might have to anyway before long.

No Tomorrow is going on hiatus until 12/27. It’ll end it’s 13 episode season on January 17. The entire season will be up on Netflix 8 days later, so if you only discovered the show recently you’ll have a chance to catch up. I’ll have recapped the first 7 episodes by the time it’s up on Netflix. The CW will take the Netflix streaming numbers into account when it makes the decision on whether to give No Tomorrow a second season or not. The show’s low broadcast ratings don’t necessarily mean cancellation yet.