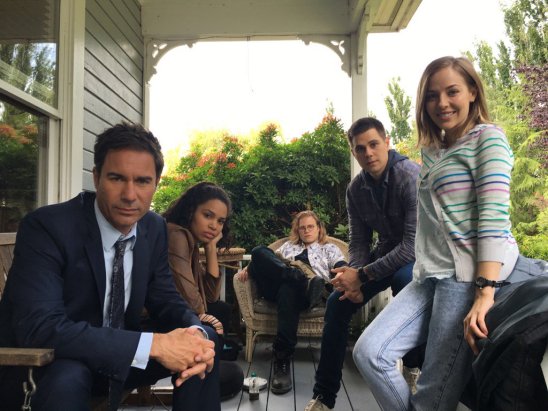 We open on McLaren and his FBI partner, Forbes, on a stake out, watching a deal being made for some kind of tech between two groups of men, out of the trunks of their cars. The deal goes bad, shots are fired, and the FBI moves in. One of the injured men gives McLaren a traveler message as he’s dying. There’s another team in need of support.

When McLaren arrives at the coordinates, he discovers it’s one of the groups who was at the shoot out. Two of them have been seriously wounded. Marcy and Carly are on their way to help. It turns out the deal was between two teams of travelers, but the second team, a group of Russians, had gone rogue, and tried to steal the tech. McLaren questions why travelers would betray the mission that way. The more experienced team replies with a condescending, “You must be new.”

Marcy realizes that she can only save one of the injured men, Luka, and will need a blood donation from the other, Carter, which will likely kill him a little more quickly. The team leader, Rick Hall, goes to talk to the injured team member to get consent, while Marcy operates to try to save the other, Luka.

Rick Hall and his team are inhabiting the bodies of criminals, and as I’ve noticed with the others, they’ve taken on personalities similar to their hosts. Hall in particular is manipulative, ruthless, and duplicitous. He and McLaren clash immediately, and it only gets worse as the episode goes on.

We also find out that there are travelers who give up on the mission altogether, and go off on their own to lead normal or criminal lives. I fully expect to find out that there are different factions of future people who disagree about what needs to be done to change the past, or if the past should be changed at all. Still looking at Jeff. Carly’s the only one we see him interact with. She wouldn’t know if his personality changed. The travelers don’t need to go into a dying body, they just do that because it will have the smallest effect on history. McLaren was a completely healthy, uninjured person when they took him over.

Trevor is enjoying his healthy teenage body now that he’s recovering from the concussion. His guidance counselor sets up a meeting with his parents to discuss Trevor’s future. Original Trevor was meant to go to college on a football scholarship. Gary, his dad, is VERY attached to the idea. Trevor’s mom doesn’t seem to know much about him, other than that he watches a lot of internet porn. She brings it up every chance she gets. She must have walked in on him pretty often. She doesn’t seem to care much about him either. Traveler Trevor announces at the meeting that he’s done with football forever and is going to focus on the sciences from now on. Then he skips out on the meeting, because a mission has come up. Honestly, with the kind of head injury he’s recovering from, and the dangerous work he does, he doesn’t need to also play football and risk even more head injuries. Anyone with any sense would tell the kid to protect his head from here on out. But the guidance counselor and his parents are stunned into silence.

Jeff, the abusive police officer, baby daddy, and possible evil rogue traveler shows up to harass Carly. He says they need to talk about their family. She points out they aren’t a family, he is merely the baby’s biological father. He accuses her of sleeping with McLaren, who he says he’s spotted hanging around. Then Jeff comes on to her, trying to convince her to take him back after that one little drunken slip up that would have killed her if she hadn’t become a traveler. She knees him in the groin in a victory for women everywhere. Then she tells him he can see the baby when he starts paying child support. Traveler Carly is who we all wish we could be in an argument with jerks like Jeff. He says she’s like a completely different person as she drives away. Uhoh.

Since he was unsuccessful with getting whatever it was he wanted from Carly, Jeff moves on to Marcy. He suggests to her that he might need to ruin David’s career, or even have him arrested, for David letting Marcy stay with him. I’m surprised he hasn’t caught up with Philip yet, since he was arrested under unusual circumstances and is also potentially an easily intimidated weak link.

Kat shows up at McLaren’s office to bring him dinner, since he missed date night. She complains that it’s been a while since they’ve been intimate and wonders if there’s someone else. He reassures her that there isn’t.

Ray shows up at headquarters to bring Philip his latest drug delivery. He sees Philip’s Guilt Wall of Host Candidate Death Dates and starts asking too many questions. Philip sends him off with more bets. Ray uses the winnings to find a safehouse for Luka and Hall.

Luka wakes up with night terrors and rips out his stitches. Marcy’s little brother used to have night terrors before they got separated, and she wonders if Luka might be him. Hall reminds her of Protocol 2: Leave the future in the past.

Forbes figures out where Luka and Rick are hiding, so they have to be moved to a new hiding place. Forbes found them because Rick left a trail of evidence that was easy to follow, but he blames McLaren for not keeping Forbes away. They are moved to the team’s headquarters, and Hall demands to take over the team because of his level of seniority over McLaren. He is disrespectful, sometimes to the point of abuse, to everyone on McLaren’s team. Hall decides that McLaren needs to kill Forbes so that Forbes can’t get in their way again. It’s an obvious power play and test, but the director is not heard from throughout the entire episode. It’s not the director’s test, just Hall trying to establish dominance.

Trevor and Philip fix the tech that was damaged in the original shoot out. Hall and Luka head out to hand it off to the next team, while McLaren goes to meet Forbes and kill him. McLaren and Forbes meet in a lot full of storage containers, and begin making their way through. They stop when a car arrives. An entire FBI strike team rushes out to arrest the men in the car, who turn out to be Luka and Hall. McLaren double-crossed them.

Trevor, dressed as an FBI agent, takes the tech from Hall’s car then goes with Carly to the rendezvous point for the hand off to the other traveler team. When Carly and Trevor tell her that the tech has been damaged and repaired, the woman from the other team says, “So long as it works. Helios isn’t far away.”

McLaren calls the team to thank them for trusting him. He feels they did the right thing. Now they need to wait to see if there’s retaliation from the director. At the end of the call, we discover he’s at Carly’s house, naked, in bed with her. She asks if he can stay and he says he shouldn’t, but then they kiss again and fall back down into bed.

Normally, I’d be upset about a husband cheating on his wife, but the man in McLaren’s body isn’t really Kat’s husband. He’s sleeping with the person who is his partner, the traveler in Carly’s body. (It seems like the travelers retain their gender when they travel, but I’m not sure that’s been verified.) Kat was meant to lose her husband the night the traveler took over McLaren’s body. She was destined to end up alone, whether as a widow, or because Traveler 3468 eventually leaves her for Carly. I’m okay with that. It seems like the future they come from is a terrible place, then the travelers sacrifice everything to come here. Let them have a little happiness while they can.