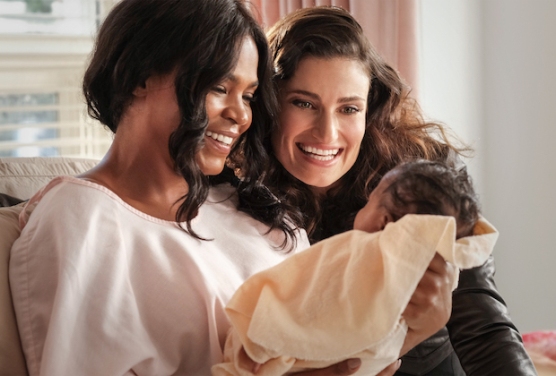 Starring Idina Menzel and Nia Long as CC and Hilary

The Lifetime TV network has released a new trailer for their contemporary remake of the classic 1988 Bette Midler film Beaches. The film will premiere on January 21, 2017 at 8:00 PM ET.

Beaches, according to production notes, “follows the serendipitous meeting of two young girls on the Venice Boardwalk, who, though worlds apart in lifestyle, embark on unexpected and lifelong friendship. CC (Menzel) is an aspiring singer trying to make it in Los Angeles until she is discovered by a director who gives her her first big shot. Hillary (Long) is the daughter of a prominent civil rights lawyer who struggles to find her own destiny. Their friendship—even with its ups and downs—sustains them for decades.”

Emmy Award nominee Allison Anders directed the reboot. Gabriella Pizzolo (Fun Home, Young Alison) and Grace Capeless star as young CC and Hilary. Jodi Capeless, Sanai Victoria and Antonio Cupo are also featured. The stars have recorded new versions of Wind Beneath My Wings and The Glory of Love, both songs fans of the original movie will remember. Beaches will include several other songs recorded for the movie as well.

Here is the new trailer!!