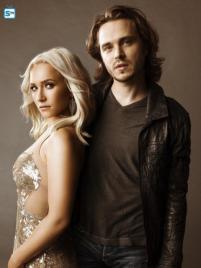 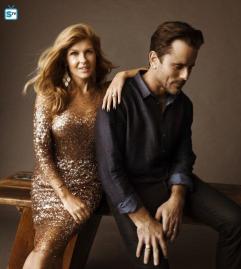 Reaction/Recap for The Wayfaring Stranger is HERE

This week, we focus on Rayna and Deacon, and Scarlett and Gunnar, with a side of Will and Kevin and Juliette and Avery. Scarlett and Gunnar have reunited, but Scarlett is insecure about where they stand with each other. Rayna returns home from her cross-country drive with ideas for her new musical direction. Juliette continues to struggle with her injuries. Will deals with the unprecedented level of attention he’s receiving from attractive men, now that he’s out and proud.

Rayna has decided that she wants to make a new album with Deacon about their lives together. Deacon isn’t sure he wants to be involved, since the last year, in particular, has been very painful for him, and he doesn’t want to relive it. Rayna doesn’t want to take “no” for an answer, and insists he change his “no” to “I’ll think about it.” She spends most of the episode hounding him about how long he’s taking with his thinking, and how he should accomplish this thinking by talking to her. He finally explodes and tells her to stop pressuring him into saying yes, the way she always does. Rayna is shocked, SHOCKED, that anyone could ever think such a thing of her. Classic Rayna. Deacon, of course, eventually says yes, but he says it with a snarky song that lets Rayna know he was still right, even though he’s giving in. This is why he had to be the one to marry her. When he’s at his best, Deacon knows how to handle her moods and need for control gently and with humor, so that she doesn’t feel the need to get angry, rebel, and make things worse.

Bucky has his own issues with Rayna’s album idea. He doesn’t feel it’s commercial enough, and Highway 65 is perpetually in financial trouble. He comes up with various alternatives and financing solutions, which Rayna dismisses. I’m thinking the Silicon Valley uber fan/billionaire will finance her vanity project, while also possibly becoming her stalker and/or kidnapping her. Bucky introduces her to the new office intern, who’s also her biggest fan and stalker candidate. At the end of the episode, someone is watching Rayna from a distance through a broken car windshield, and someone has sent her an enormous flower arrangement with an unsigned card that reads “I have always loved you.” Let the games begin! May the odds be ever in your favor, Rayna.*

Scarlett is doing that thing she does where she self-sabotages, but blames other people, especially Gunnar, for it. She spends the episode lashing out at Gunnar for having had other relationships during the time they were broken up. Or after she broke up with him, and he waited around to see if she would eventually take him back, I should say. She feels he should only date women she doesn’t know, which would be difficult, given how intertwined their lives are.

Rayna suggests a new single, and Scarlett agrees while they’re at the meeting, then attacks Gunnar for that later, too. It’s one of his songs, but he didn’t write it about her, so she hates it. Shouldn’t she have said something to Rayna at the meeting, or to Gunnar or Rayna before they put the song on the album? This is just an excuse to attack and blame Gunnar. He has the right to write songs about whoever and whatever he wants, especially while they’re broken up. Gunnar’s been in love with her since Day 1, she has no reason for insecurity. This is all just her crazy acting up. Given how little she’s willing to take responsibility for her behavior, I find it hard to be sympathetic at this point. Gunnar is kind of an oblivious idiot, but his heart is generally in the right place. She eventually talks to Deacon, sorts herself out, and lets the song evolve into being about the two of them.

I can’t remember how much help Scarlett’s ever gotten for her own mental health issues, outside of her mother’s, but it’s not enough. She needs therapy and possibly medication, stat. At least when she was talking to Deacon she was self-aware enough to realize that she was repeating her mother’s patterns with Gunnar. She couldn’t do anything right in her mom’s eyes, Gunnar can’t do anything right in her eyes when she gets in those moods. It’s a useful coping mechanism for avoidance and deflection, but it’s terrible for the person on the receiving end. And unlike Scarlett with her mother, Gunnar doesn’t have to stay and put up with it. He’s been patient with her so far, even appreciates her complexity, but his willingness to be her whipping boy might not last forever.

Juliette is still in pain, worried she’ll never walk again, and worried Avery won’t want her if her condition doesn’t improve. At least she’s made some progress in verbally expressing what she’s feeling, rather than resorting to bad behavior, pills, or alcohol. Not that she was the most pleasant person to be around either this week, but she is coping with serious injuries and major life changes, along with caring for a toddler and trying to repair her relationship with Avery. Avery has his own moment of insensitivity that sets her off.

She and Avery find the identity of the woman who rescued her from the plane crash, then Emily takes Juliette to the woman’s church. The pastor tells them that the woman, Hannah Lee, doesn’t want any attention. He agrees to pass on Juliette’s thanks, and her phone number.

Will and Avery are out for a romantic birthday dinner when they run into Jakob Fine, famous men’s fashion designer. Jakob’s not shy about making his interest in Will obvious, despite both he and Will being there with other guys. He invites Will to a trunk show at a local mansion before he blows out Will’s birthday candle. (He made it look as dirty as it sounds.)

Kevin encourages Will to go to the fashion show, and maybe pick up a 38 Regular sports coat for him, as well. Kevin is too sweet and well-adjusted to survive on this show, but I love Kyle Dean Massey and their relationship. I don’t want them to breakup. Do I root for him to fight for his man as he learns to be cynical and jaded? Or to let his baby gay go explore the world, while Kevin/Kyle maybe sticks around and takes up songwriting with one of the regulars? And he could be performing, the actor is a Broadway star himself. Rayna needs to bring him in on her label.

Be that as it may, Will heads off to the trunk show and enjoys some heavy duty flirting with a bit of suit shopping. Jakob lets Will know that the offer is open indefinitely. Will buys Kevin a sports coat to make up for his guilt. Back at home, they talk about the flirting. Kevin wants Will to tell him if Will ever wants to be with someone else. Will insists he wasn’t even tempted. He was definitely tempted. To make up for his guilt even more, he asks Kevin to move in together. Kevin says yes. Will looks conflicted.

Will loves Kevin, but he went straight from being deep in the closet to a serious relationship, with no time in between to figure out what it meant to him to be gay. He wants to live by the morals he was raised with, except that one, teeny, tiny difference. He’s going to recreate a conservative, heterosexual, monogamous relationship, and stamp out any desires that don’t fit that mold, even if it kills him. I think we’ve been down this road before. Maybe Kevin will figure out what’s up before things get too self-destructive this time.

Did y’all catch the promos for Sun Records during the commercial breaks? Looks like it’ll make for a fun Thursday night double header for a couple of months, starting at the end of February.

Next week, Avery deals with another spoiled star, Juliette meets her angel, and Maddie meets a new guy.

*Spoilerish, if you try to avoid that sort of thing: There have been reports for months that Connie Britton would only be in the first 10 episodes of the season, and would then exit the show. This week, however, she told Ellen DeGeneres, “I’m in. I’m in for the duration.”

There’s no detail in that statement. Being “in” doesn’t mean being in every episode. She could easily be held hostage by a stalker/kidnapper and disappear for episodes at a time, or be in a coma, or one of several other tropes, while still technically being a regular on the show. Maybe they’ll film her hostage or hospital bed scenes ahead of time, so she’ll still have a presence on the show while the actress is off-set for a while. Maybe she wanted out because she had another project she wanted to work on, and they managed to work out a deal that gives her the time off she wanted, but will still bring her back eventually. Or maybe the ratings on the sneak peek were high enough that they decided they could afford her for more episodes, possibly with a pay cut. We’ll find out more over the next ~20 weeks.