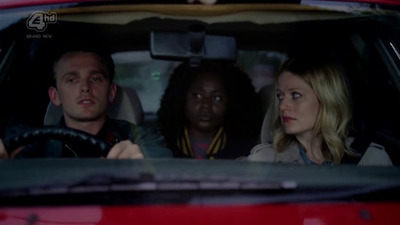 Amy, Raquel and Jake go to Mercy’s house to see if she knows where Dylan took Suzanne when he grabbed her at the cottage. The girls send Jake back to wait in the car, while they go inside. His main functions seem to be getaway car driver and plucky comic relief. It’s fantastic that, even though he’s the boy, he’s no help whatsoever when it comes to fighting demons.

When they get inside, Raquel flicks out her extendable metal baton thing, and Amy picks up a rolling pin. Mercy’s on the phone talking about mom stuff. She hangs up and gets ready to put her son to bed. All four of them spot each other at the same time. Mercy says she’ll put her son to bed, then they can talk, or whatever. Raquel and Amy agree. Amy goes to get the school muffins out of the oven. Mercy puts her son into bed, and tells him to stay there, no matter what.

Mercy pretends to make a deal with Raquel, but then, as soon as Raquel’s distracted, gives her the mini-Dementor’s kiss that she gave Sawyer. Raquel tumbles down the stairs, where Amy finds her a moment later. Amy searches for Mercy. She finds her in the playroom. They fight and wrestle, using the toys as weapons. The rolling pin is less useful than one would expect, as is the toy knife. The giant stuffed snake, however, is quite helpful. Mercy tells Amy that it’s about more than just Suzanne. Amy has no idea what’s coming, no idea. Amy stabs Mercy in the chest with a toy fighter plane. Mercy smashes Amy in the face, grabs her son, and gets out of the house. She was especially pissed that they put her son in danger. Mercy and the boy go stay with Callum.

Amy stays over at Raquels’ so that she isn’t alone. Jake figures this is his last chance before Amy falls in love with Tyler, or at least into bed with him, so Jake confesses his love for real before she goes inside. His heart and his intentions are pure. Amy apologizes, but she doesn’t feel that way about him.

Amy tells Raquel that Mercy said there’s a train full of demons headed straight for them. They ponder why the demons took Suzanne instead of Raquel, and why they’re so much more organized than usual. Raquel figures something nasty is coming. Then she lets Amy decide whether to wear the penguin onesie or the cow onesie to sleep in. Amy wisely chooses the penguin. It even has a hood.

Amy changes into her penguin onesie, then heads to the kitchen to make tea while Raquel changes. While Amy’s changing, Raquel tells her she’s really growing a pair of lady balls. Our baby demon hunter is growing up.

Callum and Mercy argue while they drink wine. Mercy is pissed that Raquel attacked her in her own home and threatened her son. She wants to get rid of Raquel, but Callum won’t let her. He’s not going to lock her up because he needs her running free, so she’ll develop properly in time for the gateway demon ceremony. Amy, however, is unnecessary. She stabbed Mercy with a toy F-15 fighter jet and ruined her favorite bra. Callum thinks it’s time to use Suzanne. I think we can all understand Mercy’s anger over violently losing a favorite bra.

Tyler comes home to find Amy in his kitchen in full Penguin regalia, hood up. They agree that penguin is always the better choice, obviously. Tyler wants to talk about the other night. Amy is as adorably awkward as ever. They end up talking about Suzanne, but leaving out a lot of details. Penguin/human sex ensues, and seems to be mutually satisfactory.

Raquel is creepily listening at Tyler’s wall when Harry calls her to ask for a date. She plays hard to get for minute, then gives in. He pretends he’s still in the woods and doesn’t know where Raquel lives, but after Raquel hangs up the phone, the camera pulls back to show him watching her from the street. They have being a bit creepy in common!

Amy’s woken up the next morning by a prophetic dream. She sees herself falling from a height, and Harry lunging at Raquel. The dream causes her to wet the bed, so she tries to sneak away out of embarrassment. Raquel catches her, and is not cool with it. Amy confesses about the dream. Amy hasn’t met Harry yet, so she doesn’t recognize him in the dream. Amy’s mother could also see the future, and Amy always thought she was crazy. Tyler wakes up, and Amy tells him that she only wets the bed when the sex is really good.

Callum starves Suzanne until she agrees to call Amy and lure her to Callum’s abandoned factory. Amy, Raquel and Jake head over. Jake is jealous, since he can tell that Amy slept with Tyler. He takes comfort in the fact that he’s the one they call for demon hunting help. The demons lure Jake and Raquel away so that Suzanne and Amy end up stuck in the elevator alone. Suzanne is still starving. Amy calls Raquel, then tries to talk Suzanne through her controlling hunger. They’re BFFs. They’ve always taken care of each other, and they’re going to keep doing that. They pretend that Suzanne has fed on Amy so that Dylan will get the elevator moving again. Suzanne says she can’t live that way any more, rushes Dylan, and throws them both out of the several stories high window.

Amy waits in the car while Jake checks on Suzanne’s body. We don’t see the body, just an ear and a pool of blood. He tells Raquel that her head was severed, so he didn’t check for a pulse. So, neither Raquel nor Amy saw the body. Dylan’s body most likely died, because it was human, but the demon inside would go on to possess someone else. It seems unlikely Suzanne would actually be decapitated though. I stand by the no body=no dead rule, even on a low-budget show that can’t necessarily afford gross bodies. There’s a reason only Jake looked at the body. Suzanne could have been signaling to him to lie to Amy, or he could have been easily fooled. Like Raquel said, the undead aren’t killed so easily.

But, for now, Suzanne is gone, and Amy is sad again.

Callum is angry again. He manages his anger using his preferred method, random murder of an innocent bystander. It helps relieve the tension. He leaves Mercy to handle the details of their complicated plan.

Raquel and Amy realize that the demons really want to get rid of Amy, because she’s close to Raquel. Amy moves in with Raquel for the forseeable future. Raquel goes to meet Harry for their date, after telling Amy she’s going to pilates. Amy sees Harry, and realizes it’s the guy from her dream. She tries to call Raquel, but Raquel won’t pick up the phone.

Raquel is on her own with a sketchy guy and she’s turned off her phone. The plot thickens. Raquel is generally just fine at taking care of herself though. If anything, Jake and Amy will get into trouble again while trying to help Raquel.