After a long wait (for the audience), the King of Wakanda has finally returned home to be crowned. The country he returns to is a glorious place, a perfect blend of environmental preservation and cutting edge technology. The people are strong, beautiful, and intelligent. The traditional culture is thriving as technological updates improve the quality of life. Women are front and center in Wakanda, in positions of importance. The King’s teenage sister is even the main inventor and scientist for the country. Imagine that- a teenage girl who acts like a normal girl, but is also one of the smartest people in the room at all times, and given the respect of everyone around her.

But Wakanda isn’t actually a utopia. It just appears to be, because it’s so much closer to it than almost any place else on earth, other than maybe some of the Scandinavian countries. And those are too cold and dark for most of us.

The seeds of civil war have been brewing for generations in Wakanda. King T’Chaka made some mistakes when he was young that inevitably come back to haunt the royal family and the nation. In the end, Wakanda ends up in crisis when various rivals from inside and outside the country decide that the transition in rulers is a good time to exploit the country’s weaknesses.

Black Panther, directed and cowritten by Ryan Coogler (with Joe Robert Cole) is the latest big budget feature film in the Marvel Cinematic Universe (in case this is the first time you’ve been on the internet in a year). The film has been hyped and highly anticipated since it was announced. Thankfully, it largely lives up to the hype.

Crown Prince T’Challa (Chadwick Boseman) and his father, T’Chaka, the king of Wakanda, were introduced in the 2016 film Captain America: Civil War. While attending a UN summit, King T’Ckaka (John Kani) was quickly killed by a bomb, making T’Challa the uncrowned king and sending him on a quest for revenge for the rest of the movie. He completed his mission, discovering who was responsible for the bombing and catching them. But he also realized that due process was better than personal revenge, because violence just leads to more violence, and in the end it doesn’t solve anything.

Black Panther picks up where Civil War left off, with T’Challa arriving home for his father’s funeral and his own coronation ceremony. This film forces him to face the difficulties that a ruler must face- what do you do to protect your people when violence is inevitable? He can’t simply pass the problem on to a court system as he did with Zemo in Civil War, or murder his opponent as a matter of personal justice. Now his decisions affect a nation, and potentially the world, but he still needs to protect his people without unnecessarily escalating conflicts.

He also needs to face the legacy of his beloved father’s decisions. King T’Chaka kept secrets, and made hard choices of his own that weren’t the choices T’Challa would have made. Now T’Challa has to come to terms with learning that his father wasn’t always the man T’Challa thought he was.

Black Panther is the story of a nation that’s deciding what it’s place will be in the modern world, and a king who is figuring out what kind of king he is. It’s also a coming of age story for T’Challa the man, as he has to learn to stand on his own, without his father, and the origin story for Black Panther, superhero.

Like the best of the MCU movies, it has layers of meaning, sometimes stated straight out (one character’s dying words really go for it) and some metaphorical. It’s also has multiple levels of storytelling, which we don’t always get in the MCU. In that sense, it’s the equal to the Captain America movies, which all included larger MCU or real world stories, Avenger level stories, and multiple subplots for the many supporting characters.

Black Panther does pretty well by its female characters, too. There are women everywhere, in the background and foreground, in positions of power and as everyday people. They are main characters and supporting characters who are pivotal to the story. There are women ranging in age from T’Challa’s 16 year old sister Shuri, played by Letitia Wright, to his mother, Queen Ramonda, played by Angela Bassett, who is 59. Bassett wore a silver, waist-length wig with the hair rolled into dreadlocks for the film. She and the wig were both regal.

One of the other important female parts is played by Danai Gurira, as Okoye, the head of the Dora Milaje, T’Challa’s elite all-female bodyguard and special forces squad. The fourth main female character is Nakia, played by Lupita Nyong’o, a spy, freedom fighter and T’Challa’s former girlfriend. They all have substantial roles and are treated with respect by the script and the other characters.

But there are some crucial moments where Black Panther the film drops the ball, because, as usual, while women can be scientists and generals and spies, they can’t necessarily finish the film being strong and decisive in battle. There were a couple of moments during the climactic battle scene that rang hollow for me, because I felt the women involved simply wouldn’t make those choices, based on their professional skills and knowledge, and the quick thinking we’d seen them use in other situations.

If the writers didn’t want to give a big moment to those characters, then they should have written the scenes a different way, instead of making the women suddenly look incompetent with their weapons and like they needed to be rescued by men. Those were the moments when I knew I was watching a Disney film.

There were a few other moments where a character’s actions or a plot device didn’t really make sense but were crucial to the plot, which is the reason I took half a star off the rating. But as comic book stories go, it’s pretty darn logical, overall. Coogler and Cole wrote a fast-paced, fun, funny, meaningful script with fully realized characters that I look forward to seeing in future Black Panther and MCU movies.

The cast and their acting are superb. This has got to be one of the most attractive casts of a film, ever, and the costume design goes out of its way to show that off without sexualizing the characters, which is refreshing. But these are almost all actors that are already known for their acting chops, so it’s no surprise that they’re amazing here. Their chemistry together is also wonderful.

Martin Freeman, as the lone white guy in Wakanda, CIA agent Everett Ross, is as sincere and cute as ever. He’s a great counterpart to the richness of the Wakandan culture. He’s a very by the book, bland, company man, who is confronted by the city of the future in a country that loves color, patterns, rhythm, and bold stylistic statements. Ross is a long way from the land of gray office cubicles, and he does his best to follow along.

The cinematography (by Oscar nominee Rachel Morrison) and production design (Hannah Beachler) of the film, which create the culture of an entire country, including five separate tribes, each with its own distinct style, are more of its major strengths. It blends futuristic technology like mag lev trains and spear-shaped, hand-held rocket launchers with the natural environment and designs inspired by those traditionally found in Africa. As a whole, it looks gorgeous, and serves as a template for cities of the future on how to maintain natural spaces and unique cultural flavors while incorporating technological advances.

The score (Ludwig Göransson) also blends modern popular music with African rhythms and some of the themes more typically heard in an MCU movie, helping to firmly ground it in-universe. 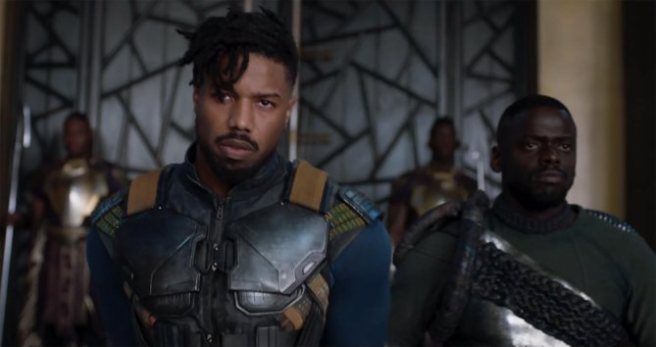 The action sequences are many and varied, ranging from hand to hand combat at the top of a waterfall, to the required lengthy car chase, to a major battle on a field that includes soldiers riding rhinoceroses. They are all well-done, though I personally preferred some of the Black Panther fight choreography in Civil War. Metamaiden tells me I’m being too picky, so I concede that point. I just really loved the way Black Panther leapt from car to car during the car chase in Civil War, and this one had fewer moving parts outside of the cars.

One unusual thing about this film is the lack of cameos by other members of the MCU. (I thought Tony Stark was showing up in everything these days. Stan Lee does show up, obs, and the entire audience made noise.) We get clips from Civil War to remind us of how T’Chaka died, with a photo of Zemo. Andy Serkis’ Ulysses Klaue, first seen in Age of Ultron. plays a major part in the story. He plays his role with relish. That’s about it for cast members that we’ve met before, besides T’Challa and Ross.

The major tie-in with the rest of the universe comes in the second post-credits tag (so stay until the very end of the credits, trust me), with the development some us have been waiting for since the mid-credits tag at the end of Captain America: Civil War. Which still begs the question- where are the Avengers during this movie? In universe, it’s only a few days since half of them found refuge in Wakanda. Have they moved on already? Are they all taking a nap and staying out of Wakanda’s internal affairs? Will Infinity War have time to answer these burning questions?

Overall, Black Panther is one of the best superhero films to come out in a long time. It has a unique, hopeful and appealing creative vision for what the future could be, which is unusual in the midst of the current film and television landscape that’s devoted to dystopias. King T’Challa and his people are complex characters with exciting, interesting lives. With any luck those lives will continue to unfold in the MCU.

Description of the tags, for those who want spoilers. 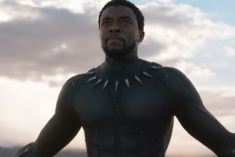 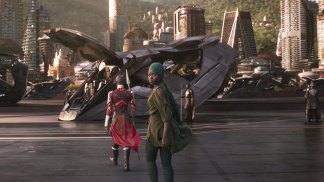