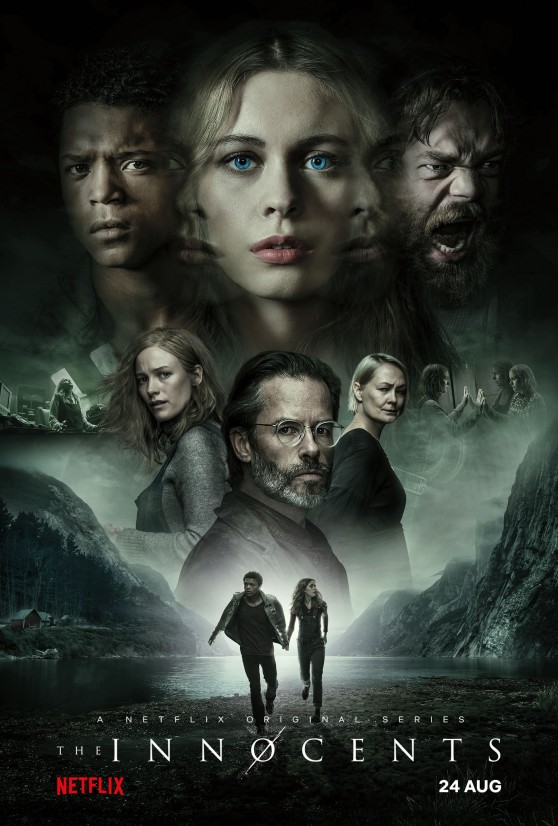 Let’s take a look at Netflix’s new supernatural series, The Innocents, a story of Romeo and Juliet among the shapeshifters, which will be released 8/24/18. Season 1 of the British show, filmed in Britain and Norway, has 8 episodes. Hania Elkington and Simon Duric created, executive produced and wrote the series. Simon Duric previously worked on The Force Awakens and The Crown.

8/22/18: The reviews are coming in and they’re fantastic. More after the jump, including a Behind the Scenes video and interviews with the cast.

The Innocents follows a pair of teenage runaways who discover that one of them, June (Sorcha Groundsell), is a shapeshifter. They learn that her mother, Elena (Laura Birn), who abandoned June 3 years earlier, is also a shapeshifter and that there is a community of shapeshifters. June’s boyfriend is played by Harry (Percelle Ascott). Guy Pearce plays a scientist/professor who wants to help June.

I’m excited that the mother-daughter relationship looks like it will be one of the plotlines emphasized in this show, even though the teen relationship and Guy Pearce are getting most of the attention in the trailers. Add in the shapeshifter community and the community that June and Harry ran away from, and that leaves a lot of room for dramatic complexity. We’ll have to leave sci fi complexity to the mad scientist professor. I don’t know any of the other actors, but Guy Pearce does well with complicated, conflicted nice guy roles, such as his Emmy Award-winning turn in  Mildred Pierce.

I’ve read several reviews of The Innocents that have come out in the last few days, and the critics, from Variety to TV Guide, love this show, declaring it your new obsession or your new favorite show. They especially praise Sorcha Groundsell, the lead actress, who plays the teenage shapeshifter; the love story; and the cinematography. I’m fascinated that these jaded TV critics are so into a teenage love story, and that they are especially into it because of how devoted the couple is to each other, no matter what obstacles they face. Not that many years ago, Twilight was undeservedly raked over the coals for the same themes. (I mean the books, not the movies. The movies are terrible.) Times are changing, and people are looking for security in their fantasy these days.

These are 3 different interviews, even though they’re on the same set. They must have done a press day, where the cast spent all morning on the same set, while interviewers rotated through.