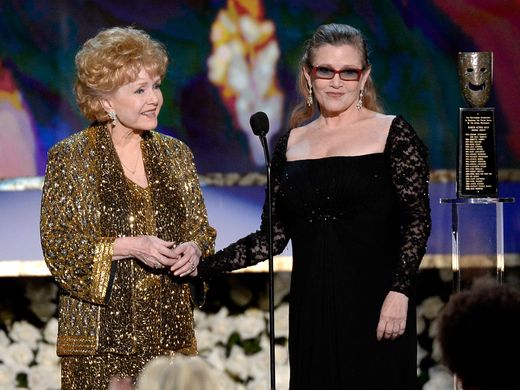 HBO announced this morning that they will broadcast the Carrie Fisher/Debbie Reynolds documentary film Bright Lights: Carrie Fisher and Debbie Reynolds on Saturday, January 7, at 8:00 PM ET, instead of in March, as originally planned, in response to the deaths of both women this week. The documentary was filmed and completed in 2016, and has already been screened at the Cannes and New York Film Festivals.

For more information, see our previous story on both films, USA Today, or TV Guide.

TVLine reports that the cable network TCM will run a marathon of Debbie Reynolds’ best movies as a tribute to her on Friday, January 27, 2017, starting at 6:00 AM ET. Singin’ in the Rain airs at 6PM ET. The Unsinkable Molly Brown follows at 8 PM ET. The full schedule is below, courtesy of TVLine.

6 am | It Started With A Kiss (1959): After a whirlwind courtship, an Army officer and his wacky wife try to make their marriage work

9:30 am | How The West Was Won (1963): Three generations of pioneers take part in the forging of the American West

4:30 pm | I Love Melvin (1953): A photographer’s assistant promises to turn a chorus girl into a cover girl

6 pm | Singin’ In The Rain (1952): A silent-screen swashbuckler finds love while trying to adjust to the coming of sound

8 pm | The Unsinkable Molly Brown (1964, pictured above): A musical biography of the backwoods girl who struck it rich in Colorado and survived the Titanic

12:30 am | The Catered Affair (1956): A working-class mother fights to give her daughter a big wedding whether the girl wants it or not

2:15 am | The Singing Nun (1965): Fanciful biography of the Belgian nun who briefly made the hit parade

4 am | How Sweet It Is! (1968): A married couple’s working vacation in Paris turns into a battle to stay faithful